Get Out of GileadAnti-Blackness in “The Handmaid’s Tale” 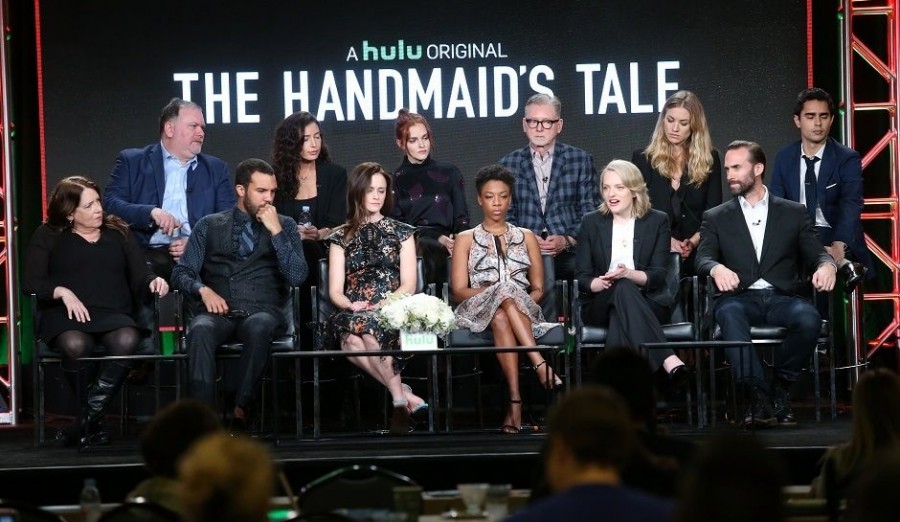 The Hulu series’ cast of The Handmaid’s Tale from Inquisitr

I fell in love with science fiction through the anthology Octavia’s Brood: Science Fiction Stories from Social Justice Movements. This collection, which was coedited by Walidah Imarisha and adrienne maree brown, begins with the belief that “all organizing is science fiction.” After reading some immediate favorite works, such as those by Alexis Pauline Gumbs, Autumn Brown, and Leah Lakshmi Piepzna-Samarasinha, I threw out any conventional liberal ideas of settling for what is “realistic,” and instead began to imagine a different, supposedly impossible world: a world without anti-blackness and capitalism, a world where we can find justice without prisons and police.

Soon after my love for science fiction bloomed, America elected Donald Trump, and we were thrown into a moment of increased interest in dystopia. In particular, Margaret Atwood’s 1985 novel The Handmaid’s Tale has become a symbol of resistance to the religious right’s increasing political power and attempts to bar access to reproductive healthcare. In anticipation of the Hulu series coming out April 26, sales of the book have skyrocketed, with readers looking to it for wisdom and solidarity. Yet The Handmaid’s Tale ultimately does not offer answers to the questions we must ask and, at the same time, remains silent on the central feature of American history: anti-blackness. It takes from the oppression of Black women and applies it indiscriminately to white women.

As a scholar of American history and literature, Atwood based the Republic of Gilead—a totalitarian theocracy in the near future—mainly on the theocracy of the Puritans in 17th-century America. Atwood was interested in the lie often repeated: That Puritans came to America to establish a democracy. We can see her attempts to shatter this lie and to uncover the origins of dystopia in America through her exploration of misogyny and religious intolerance in The Handmaid’s Tale. Atwood even dedicates the book to one of her ancestors, Mary Webster, who was accused of being a witch and survived an attempted hanging in Connecticut. Curiously absent from Gilead are Black women, who were the first ones accused of being witches in the 17th century. Atwood therefore fails to account for the anti-Black violence and enslavement of Black people that American society was grounded in and continues to operate on today.

Understanding the historical influences of the book requires looking beyond the obvious and into what is absent. Race in Gilead is curiously left unaddressed—haphazardly thrown away with a single punchline, “Resettlement of the Children of Ham is continuing on schedule.” It is noted that Black people in Gilead have been “resettled” to “National Homeland One,” which Atwood stated, in a 1994 interview with Danita J. Dodson, was a reference to South African apartheid, but it is not considered important enough to explore any further.

Although Atwood dedicates just two lines to the fate of Black people in Gilead, the structures of oppression that Offred, the novel’s narrator, and the other white Handmaids face are taken largely from the experiences of enslaved Black women in America. Being banned from reading, writing, or congregating, the spectacle of public lynchings, and the practice of naming people after their owners (Offred, or “of Fred”) were all methods used to control Black people during (and after) slavery. In order to escape Gilead, women use a secret network to get to Canada called the “Underground Femaleroad.” And most importantly, the central theme of the book—that women are property, deemed valuable by their ability to produce children for their Commanders and Wives—is stolen from the distinct oppression that Black women were forced to navigate. By taking the specific oppression of enslaved Black women and applying them uncritically to white women, The Handmaid’s Tale ignores the historical realities of an American dystopia founded on anti-Black violence.

While a few bloggers have analyzed race in The Handmaid’s Tale, popular media outlets and Atwood herself have been largely silent on the issue, focusing solely on the oppression of (white) women in the book and its relevance to today. In the 1994 interview, it is Dodson, not Atwood, who brings up the historical parallel to slavery. And although Atwood has since mentioned slavery as a historical grounding, it feels as though she has considered this only as an afterthought, thrown into interviews years later in response to the growing, yet still marginal, criticism about Atwood’s erasure and appropriation of Black women’s suffering in the book.

Dodson’s analysis in “‘We Lived in the Blank White Spaces’: Rewriting the Paradigm of Denial in Atwood’s The Handmaid’s Tale” offers the most compelling argument for Atwood’s intentional use of Black women’s experiences as fodder for her dystopia. Dodson points to similarities in the form of Offred’s account—confessional, first person, transcripted oral history—to 19th-century Black women’s slave narratives. Yet Atwood never acknowledges this literary tradition in interviews and instead references her influences from the dystopian canon: white authors such as Ray Bradbury, George Orwell, and Aldous Huxley.

Just as Atwood is not intentionally in conversation with Black women’s slave narratives, Offred is not speaking to the Black women in which Atwood liberally takes from. By describing Offred’s indifference to the oppression other women experienced pre-Gilead, Atwood attempts to show how Offred develops a political consciousness, implicating herself in the current Gilead regime and speaking to women across differences: “I will bear yours…if I ever get the chance…” However, the looming presence of this unknown woman Offred is trying to reach, the “you” throughout the book, is not the Black women erased and appropriated but, I would argue, the other white women of Gilead. While the Black women in the “Homeland” remain voiceless, it is Offred’s whiteness that ultimately allows her to escape the Commander’s house and leave a record of her experience.

The Handmaid’s Tale is a dystopia that is neither revolutionary nor liberatory. Writing a story about white supremacy with no Black characters, while using the erasure and exploitation of Black pain, is art that further silences and marginalizes Black women at its core. Atwood’s failure to center and uplift that history and literature is further proof of the limitations of looking to white science fiction writers for radical visions of our future. To “uncover” the dystopia of American history without centering on Black people is yet another story in the service of white supremacy.

Turning to authors in the Black science-fiction canon, such as Octavia Butler, Jewelle Gomez, and Nalo Hopkinson, is necessary now more than ever. These authors, in addition to the authors in Octavia’s Brood, force us to remember that the free, just world of our dreams is not simply an impossibility of the future, but already has been put into practice by the Black folks of our past. For Black people in American dystopia, building visionary, impossible futures is not new. In our resistance over the next four years and beyond, let’s call on these stories instead.

Priya is a writer and an organizer in New York. Their poetry has been published in the Sula Collective. 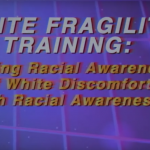