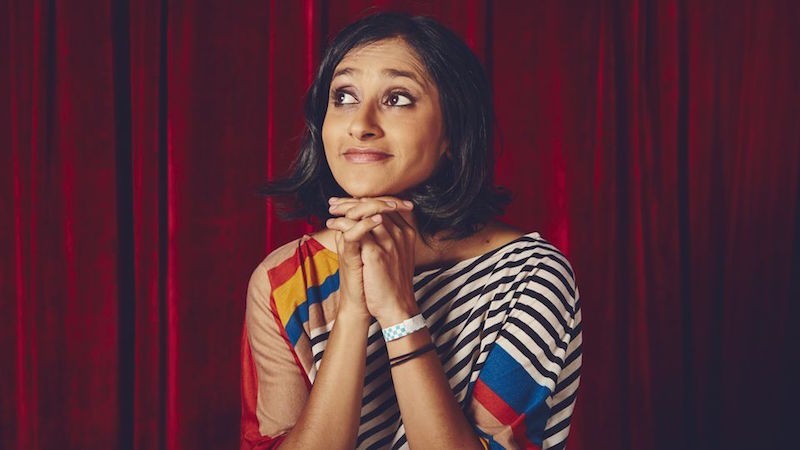 Comedian Aparna Nancherla’s jokes are equal parts adorable and existential. For example, this one-liner: “Don’t you think any pizza can be a personal one if you cry while you eat it?” With her oddball wit, she spins dorky puns into absurd ruminations on life. Now, after performing stand-up for years and working as a writer on Late Night with Seth Meyers, Nancherla has just debuted her first comedy album: Just Putting it Out There.

The recording of an hour-long, live stand-up set is the first recording released by Bentzen Ball Records, a new comedy record label started by comedian Tig Notaro. I got the chance to talk with Nancherla about stand-up, being a woman in a late-night writer’s room, and her mom’s sense of humor.

SARAH MIRK: You perform so frequently—by the time a joke makes it to an album, you’ve probably told it a hundred times. I was wondering if there are any one-liners on the album that still just crack you up every time you say them. Do you have any jokes that you’re like, “This is really funny, you guys!”

APARNA NANCHERLA: I feel like most of the material on the album I’m kind of tired of, so I don’t know if there’s anything left on it that I’m like, “Oh, I still love that joke.” I guess I feel like the handshake/fist-bump joke went okay. That’s like: I hate when you’re going in for a handshake but the other person is going for a fist-bump but then you realize that you’re in front of a mirror and you don’t know who you are anymore.

Why do you like that joke so much? Because it’s an existential crisis?

Yeah, I think a lot of my material comes from an existential place and I also like absurdism a lot so I feel like that one captures both of those things.

So I read that you had never considered recording an album until comedian Tig Notaro encouraged you to take the plunge. Tell me about that. What was that interaction like, and how did you decide you should record an album?

The idea did not occur to me on my own. I had had friends record albums, and a lot of people who had been doing [comedy] about the same amount of time as me had done them already, but I always err on the side of perfectionism and hesitancy, so I think I just thought, “Oh, I’ll wait a little longer.” These jokes could be better. I could be a stronger comedian. An album is such a permanent version of something, and I feel like with jokes there’s always room for improvement. I think I have trouble being like, This is the final version of this. Everything always feels half done even when it’s more or less done. 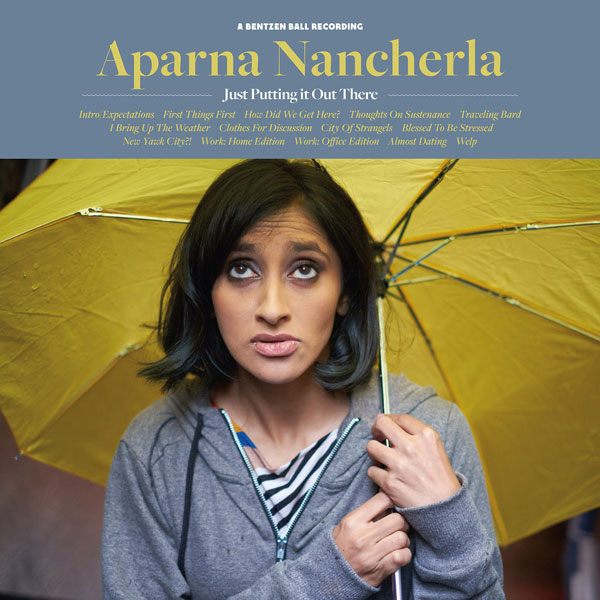 Are you still working as a writer on Late Night with Seth Meyers, or are you done with that now?

No, I left that job in early February.

Can you tell me about working on that show? What was working on the show like, and how does that relate to being a perfectionist? Because it must be nerve-wracking to be like, Well, this joke’s going out on TV.

Right. Well, I actually feel like writing for late-night shows, and especially a daily late-night show, is actually a good exercise in being less precious about your work because you’re just generating so much material. I worked on the monologue team, and you’re just writing so many jokes per day, and a lot of it is quantity over quality. They’re not all going to be perfect, but you need to get a certain amount done, so you learn to be a little less judgmental of everything you write and also a little less attached to everything you write because a lot of times, once you hand it off, it’s in the hands of the head writers or the host and whether they like it or not. Even when jokes make it through to the final round, sometimes they’re still cut for time, so you really can’t be overly precious about anything. In that sense it was a good skill to develop, but I most enjoy writing for myself. When you do stand-up, you get a little selfish. When you write for talk shows, you really have to write in the voice of the host, and I’ve learned over time that my strength is writing for my own sensibility, which is a bit more of an off-beat sensibility.

There’s been a lot written about how late-night comedy is a very white, male-dominated space. How did it feel being a woman of color in that space? Were race and gender on your radar at all times?

Not at all times, but I feel lucky that in that job the staff were more diverse than I expected them to be. There was another woman of color on the writing staff, and another woman as well, so three women total out of maybe ten or twelve people, and there were two other people of color on the staff who were guys. I feel lucky that it was more diverse than you expect a late-night writers’ room to be, so it was cool to be part of that. And it didn’t feel like race and gender were being thrown around lightly like you sometimes fear they are. People were pretty caught up with the times, and it was a fairly young writing staff, so I think that helped too.

Read This Next: Comedian Negin Farsad Talks About “How to Make White People Laugh”
Read This Next: “2 Dope Queens” is the Hands-Down Funniest Podcast I’ve Ever Heard

What does it feel like to suddenly have a huge national platform? You travel all around doing stand-up, but your most popular YouTube video might get as many views as one episode of Seth Meyers. It’s just a huge and widespread platform.

It’s definitely an amazing job to get. You’re like, I’m working for this person who’s pretty famous, and you just take it in stride after a while, and it’s just like part of the industry I work in. That’s not a very exciting answer, but after a while it does become just like any other job and you’re not thinking about that all the time. Late-night shows reach more people, but I actually think I get more exposure through, like, my Twitter account, because it’s not like on the show they say this joke was written by this person. It’s a team creating one product, whereas on the internet, your name is behind things you’ve created and you can develop a more specific following.

I thought it was cute how you open your album talking about how your mom is confused about the concept of a comedy album. She thought it might be all music. So I’m wondering what your mom thinks of your comedy career. What has she been proud of you for?

My parents have actually been very supportive. The main hesitancy they had was at the beginning; they weren’t sure if it was something that would allow me to be financially stable, but once I started getting steady work, they got more comfortable with it. They’re first-generation immigrants, so there’s still a disconnect for them between mainstream pop culture and what they’re tuned into, so sometimes I’ll still have to explain something I did after the fact, or one of their friends will pass something along. It’s kind of nice that they don’t know as much about what’s important because it keeps things more grounded for me.

Read This Next: Comedian Negin Farsad Talks About “How to Make White People Laugh”
Read This Next: “2 Dope Queens” is the Hands-Down Funniest Podcast I’ve Ever Heard