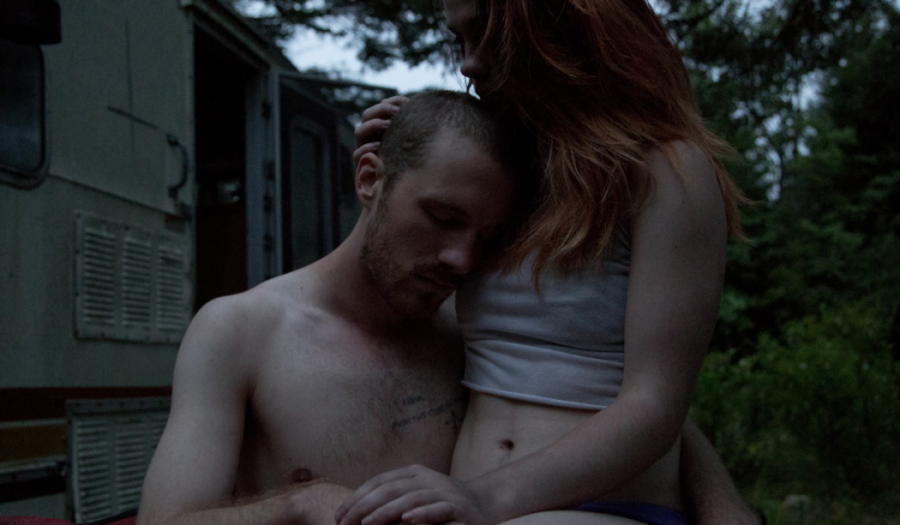 In their book Substance and Substitution: Methadone Subjects in Liberal Societies, Suzanne Fraser and kylie valentine note that mythology about the werewolf—its “bestial appetites and irrational influences, the threat of corruption, the devastating effect of stigma and discrimination”—aptly illustrates the desperate, despairing life of a heroin addict. Ashley McKenzie builds on this idea in her debut full-length film, Werewolf, and in doing so, she crafts a quietly devastating story of addiction, recovery, and relapse that portrays its subjects with both compassion and blunt honesty.

Blaise (Andrew Gillis) and Vanessa (Bhreagh MacNeil) are both recovering addicts; when the film begins, they are in the same methadone program trying to get clean. Every day, they try to scrape together money by mowing lawns before retreating to their hidden trailer to dream of escaping. But while 19-year-old Nessa has just enough of a support system to help her start putting her life back together, Blaise is adrift, hanging on to sobriety and Nessa with the same hand. When she isn’t around to support him, he spirals back into the cycle of betrayal that defines so many addicts’ lives.

It’s to McKenzie’s credit that even with such fraught material, there is no overacting in Werewolf’s brief 80 minutes. In fact, both Gillis and MacNeil inhabit their roles with a haunting lack of energy; Nessa and Blaise can barely make it through each day, let alone look happy while doing it. This highlights even the smallest displays of emotion, making MacNeil’s quiet, haunted performance in particular all the more powerful.

This isn’t to say that Gillis isn’t phenomenal in his role—he brings life to what might have otherwise been a rote addict-can’t-make-good character—but MacNeil is a revelation. She does a superb job portraying both Nessa’s numb exterior and her fragile core. Nessa begins the film as Blaise’s hardworking, underappreciated girlfriend and ends it as a stronger but more tortured woman in her own right. With Nessa, McKenzie presents one of the rarest characters of all: a female addict who finds it within herself to escape the toxic masculinity in her life.

Though McKenzie flirts with cliche, showing a suicide in the film’s opening scene and then flashing back an undisclosed amount of time, where the rest of the film takes place, her uneasy, lingering shots and fascinating framing choices are anything but ordinary. Combined with a brilliant cast, a moody score from Youth Haunts, and an unwavering devotion to authenticity, Werewolf is one of the season’s most chilling films—and one of the most uniquely feminist.