No, Donald Trump Won’t Be Good for the Arts | Bitch Media

No, Donald Trump Won’t Be Good for the Arts 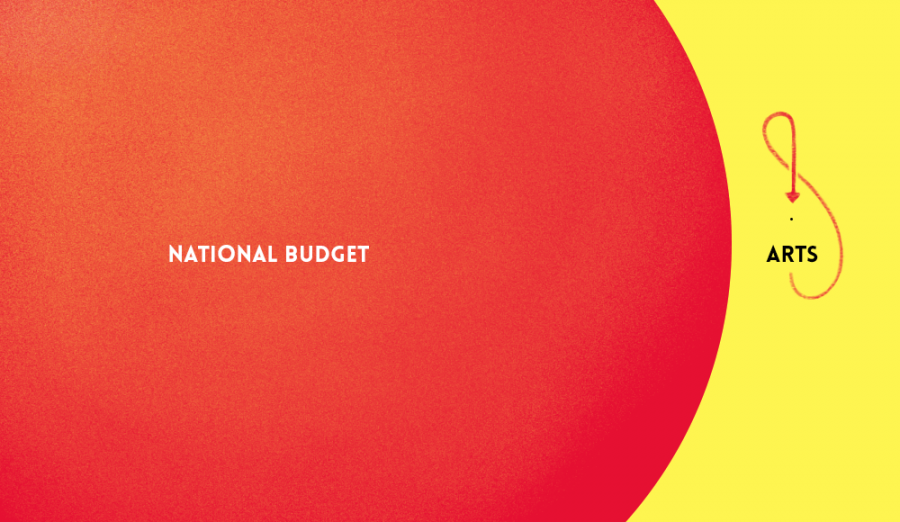 Non-alternative fact: The teeny-tiny dot that represents the Arts budget had to be enlarged 400 percent just so it would be visible in this graphic.

One of President Trump’s many big promises is slashing government funding—oddly, he’s also promised $1 trillion dollars in infrastructure spending, but it wouldn’t be the first contradiction in his political rhetoric, I suppose. Now, details are emerging on how he plans to do that. In one set of proposed cuts, he’s going straight to one of the most profligately wasteful and extraneous parts of our ballooning budget: The National Endowment for the Arts and the National Endowment for the Humanities, which consume a whopping 0.006 percent of government spending, or $246 million per year, combined. He also intends to privatize the Corporation for Public Broadcasting, which supports both PBS and NPR, saving us another 0.01 percent.

Republicans have a long history of attacking arts funding in the United States, and let’s be clear: This is not about saving money for hardworking taxpayers who don’t appreciate having their money wasted on frivolities. The government spends more than this on office supplies. It is very specifically about sending a “fuck you” to the arts in America, right alongside the new administration’s open war on journalism and the media. I mention the two together because they’re closely intertwined. Trump understands that media and pop culture don’t just reflect ongoing events: They also shape society’s response, and he doesn’t like that response very much.

This feels particularly relevant at the moment in light of the pervasive meme that the Trump administration will be “good for art” because great suffering produces fantastic works of art. This is a sentiment usually repeated by privileged dilettantes who have nothing to lose in the coming years because, for example, they’ve just been admitted to Australia on extended arts visas. Whether you’re talking Picasso’s Guernica or the punk scene, tubercular operatic dramas or van Gogh’s ear, there’s a popular perception not just that people who experience extreme hardship make beautiful things, but perhaps that people need to experience pain in order to create beauty.

The social attitude that creatives must “pay their dues” by suffering feeds into the refusal to pay them actual money for their work, into stereotypes surrounding mental health and creativity, into the lionization of pain and suffering. We like to think of artists shivering in drafty garrets or suffering under authoritarian regimes, not leading ordinary, boring lives in warm houses with ample food supplies and governments that celebrate instead of suppress them. J.K. Rowling inspires us because of the stories of writing her first novel hunched over in a cafe while trying to mind a baby—now, we sneer at her because she owns multiple homes and has a fortune rivaling that of the Queen of England.

Visions of artists thriving under Trump are dancing through many minds at the moment, and they couldn’t be more wrong. It’s not that suffering creates amazing, beautiful, stunning art, but that some people manage to claw out enough survival space to create art despite torturous social conditions. Look between the lines at the people creating amazing work throughout history even in times of hardship, and you’ll see some themes emerging: Some benefited from patrons and even official government commissions. Others were part of collectives who banded together in solidarity. Some sacrificed, but there was nothing noble about it.

Arts funding is one way that people survive against all odds. A government that wishes to suppress not just the arts in general, but specifically defiant responses to its policies, is most certainly going to leap to cutting arts funding. These proposed budget cuts reflect the desire to create a chilling climate for the arts, and they should be cause for concern.

Artists, like everyone else, have some non-negotiable needs that don’t go away no matter the political climate. They need places to sleep, preferably warm, well-lit, safe places where they have room to store some of their belongings and a space to take care of basic hygiene needs. They need a space to work and may need to purchase supplies, some of which can be ruinously expensive. They need to eat. They need healthcare. These things do not spring up out of nothing, but when artists are in deep on a complicated project, they can use grants to help support them so they aren’t scrabbling for money every day and can instead focus on creating.

Commercial success is relatively rare in the arts world, whether we’re talking about musicians, writers, visual artists, actors, or other creators. As Sara Benincasa has plainly put it, “real artists have day jobs.” They have day jobs because often, they cannot make enough from their art to support their basic needs, especially if they have caregiving responsibilities or complex personal needs.

In times of hardship, those day jobs become even more imperative. When you lose your private healthcare, you have to find a job that might offer health coverage. When the economy contracts and unemployment goes up, you hope you’re not on the front lines on pink slip day, that the market for your work doesn’t dry up. If you managed to scrape together enough money for a down payment on your home, you hope that predatory lending practices don’t mean that you’re going to lose your home when real estate values in your community tank. When food gets more expensive, when they cut public transit, when a family member is suddenly out of work and needs a place to stay, when the funding for your personal care assistant is slashed and you have to rely on friends and family to help you manage tasks of daily living, when your child is trapped in the school-to-prison pipeline, when the antidiscrimination laws that protect you are struck down, you’re not thinking about art. You’re thinking about survival.

People from marginalized backgrounds feel this cut acutely. When buyers get more selective about art, they tend to retreat to the safe and the known. Nice white men will always be able to sell books, but radical Latinx activists will get a chillier reception. Young, pretty white women will find work in Hollywood, while disabled actors of all races will not. Sharp, savvy feminist female directors will get passed over because the studio doesn’t want to do anything daring. That means you’re trading your paintbrush for a bus tray, your novel for a temp job.

Working long hours, sometimes at multiple jobs, while also managing family needs doesn’t actually leave a lot of time for creating deep, meaningful, amazing art. Sometimes you’re so exhausted you can barely crawl into bed at the end of the night. You’ll work on that painting this weekend, you tell yourself. When Aunt Lucy gets rehired and can move into her own apartment, you can take the guest bedroom back and use it for storyboarding. Once you get out of the homeless shelter, maybe you can find a quiet space for podcasting. Hopefully your computer won’t break or be stolen before then.

But the stress of a country falling apart while helped by an authoritarian monster and his band of cronies isn’t just practical, or fiscal, or functional. It’s also emotional. In October, John Scalzi wrote a post about productivity and the election, saying: “There were entire weeks where I got up each day, fully intending to go straight into writing on the book, and instead ended up checking Politico, the Washington Post, FiveThirtyEight, and a whole other host of political sites, and got myself wound up enough that it was a miracle if I got any writing done at all, much less hit my daily quota.” When he brought it up with other writers and creatives, they said they, too, were struggling with creativity. The internet responded vigorously: Yes, that’s me also.

It was strangely liberating to hear Scalzi put into words what many had been struggling with privately—perhaps even feeling like we were personally failing because creating anything had turned into such a slog, wondering how we could get up at 9 a.m. and suddenly it was 5 p.m. and nothing had happened. It wasn’t that we couldn’t work on our art because we were consumed with our day jobs and surviving, but rather that we felt frozen, incapable, and everything we wrote turned to ashes.

Because this is what hardship really breeds. Living under terrible conditions consumes people with the fight for survival, down to the cellular level. That’s not good for art, any more than leaving a plant untended in a weedy garden will allow it to flourish, because it’s so busy competing with the weeds that it doesn’t have an opportunity to grow and bloom. The notion that “hardship is great for the arts” may single out the works of a few privileged individuals who eked out a survival, but it erases untold numbers of others who subverted their abilities and dreams into making it through to the other side—as well as those who failed to survive.

Relevant: Backtalk: Stuff We Learned in 2015

by Sarah Mirk
Amy and Sarah reflect on what they learned from pop culture this year, including lessons from How to Get Away With Murder.