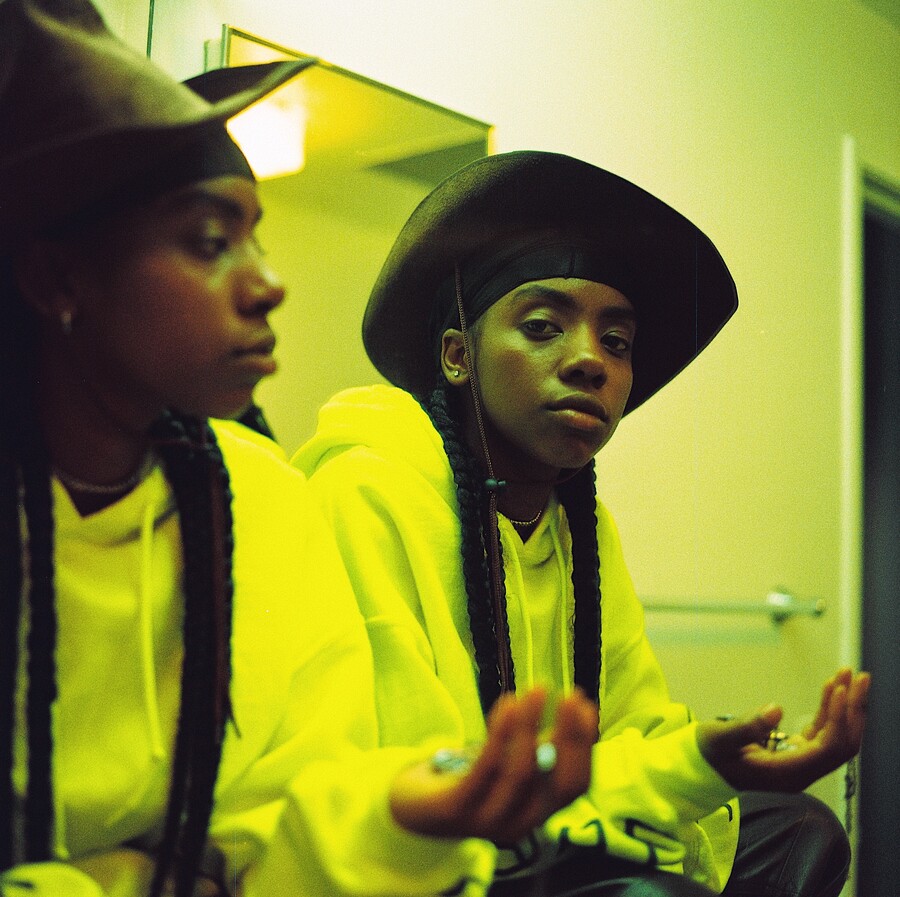 Dua Saleh never thought they would be a musician: The 25-year-old nonbinary Sudanese artist spent most of their youth writing poetry and organizing in their St. Paul, Minnesota, community. In college, Saleh started experimenting with music by producing songs through GarageBand on their iPhone. What started as an experiment grew into something more, and it was with their phone that they wrote their 2019 hit song “Sugar Mama.”

“I’ve always been really intrigued by the sound of the metronome,” Saleh told Bitch, referencing the spooky, hypnotic sound that keeps time throughout “Sugar Mama.” “I recorded the metronome on my phone and then suddenly the lyrics came to me right away. I was hooking up with this white girl in my sociology class at the time, and it ended up being really messy—the way she talked about my body ended up being really traumatizing. I was thinking about my interactions with her and other white queer people in my sociology class who would fetishize me and my body, and that’s what I was trying to say on the song.”

“Sugar Mama” and the experience that led to the song encapsulate many of the unique intricacies that make Saleh’s music stand out. The song is at once personal, poetic, and political. While certain moments in the song border on humorous—Saleh uses the phrases “Persistent halitosis/ Perplexing braggadocious” when describing their former lover—the undeniable poetry of Saleh’s lyricism alongside powerful thematic threads allow “Sugar Mama” multiple levels of success. Saleh’s repeated refrain of “I have a friendly neighbor/ She wanna be my savior” could refer to their past relationship but could just as easily be a poignant commentary on colonization. Saleh’s nuanced lyricism demonstrates their ability to use music not only as a deep personal reflection but a way to question structures of race and gender on a much larger scale.

As a queer Black musician, Saleh focuses much of their music on the intersection of their identities. Songs like “Sugar Mama” and “Pretty Kitten” reference their queerness directly, while others, like “Body Cast”—in which Saleh sings, “Lately I’ve had plaster on my mind/ County ain’t on shit, they got bodies on the line”—speak on police brutality in America. This latter song in particular was made in reference to George Floyd’s murder at the hands of Minneapolis police, and the artist is donating all proceeds from the song to MN Women for Political Change.

Saleh was born in Sudan and raised in a Sudanese household, eating traditional meals, speaking Arabic, and listening to Sudani music. The artist credits their family and hometown community in St. Paul for their involvement in political activism. Growing up, Saleh constantly heard their mother blasting NPR and Al Jazeera around the house. Saleh gained a wealth of knowledge as well from their Black community in St. Paul, which encouraged discussions around identity, white supremacy, and state violence. “Politics and activism is so embedded in my work because it’s always been hyperpresent in my life and it’s what I’m surrounded by,” Saleh said. “I’ve been spoiled by my community when it comes to gender affirmation and my political growth. The people in St. Paul and Minneapolis were instrumental in garnering and nurturing my personal and political identity.”

As a student, Saleh was also involved in several protests and demonstrations in their area, including a 2014 school walkout to protest the growing school-to-prison pipeline. Despite Saleh’s dedication to activism, they clarified that their objective is never to force political rhetoric on their listeners but rather let their work shine through their political lens. “In the past I’ve definitely felt an expectation to shoulder the ideas and morals of all nonbinary, trans, and queer people, which was never fair to me or the people who listened to my music,” Saleh said. “The personal is political and my music is always very personal, but when I’m writing I’m more in my feelings or freestyling. It’s usually not as rigorously politicized.”

Though Saleh has touched on the politicization of identity in elements of their previous projects, their newest EP, Rosetta (2020), addresses this more head-on. Since nearly every song on the EP has elements of rock, Saleh decided to name their project Rosetta after Sister Rosetta Tharpe, who many credit as the mother of rock ’n’ roll. But it wasn’t until a few months before the EP was released, Saleh admitted, that they found out that Tharpe was a queer woman. Tharpe’s identity complemented the project nicely, however, as Saleh uses Rosetta to address their queerness in a more direct way than in much of their previous work; this EP feels more intimate. “With this EP I was way more guided by my queer Sudanese identity,” Saleh said. “One of the songs on the EP, ‘smut,’ is entirely in Arabic. I used a word in ‘smut’ [that] is an ancient Nuban word [meaning] queen, but I queered it by translating it to mean ‘a gender nonspecific royalty.’ This wasn’t even something I did on purpose, [but] I think the nongendered word just made more sense sonically. My brain was manufacturing new language because I was refusing to be seen as a woman.”

Saleh has been deeply involved in the uprisings in Minnesota in the aftermath of Floyd’s death and active on social media sharing news related to the protests, yet they have still found ways to delve deeper into music. The artist told Bitch they’re hoping to do a few livestream concerts at some point in the near future to further connect with their fans. “I’ve gotten so much love, so much more than I ever expected on my music,” Saleh said. “I’m always surprised by the number of people from Sudan who are learning more about transness and queerness, or the number of people who have expressed that my music has helped them in some way. That’s why I always try to be intentional about the narrative of my project, and I think that especially comes through on this EP.”

Editor’s Note: This story has been updated at the artist’s request to note that the song “Sugar Mama” was produced on an iPhone rather than the music video; to replace a link that was driving to the Black Visions Collective to the MN Women for Political Change instead; and to note that Saleh knew Sister Rosetta Tharpe was queer for a few months, rather than a few weeks, prior to the Rosetta EP being released. [June 17 at 10:30 AM PST.]

by Rachel Charlene Lewis
“I have this platform where I can see my own audience reacting to who I am and feeling safe to express who they are as well.”