New CanonA Roundtable about Travel Writing without the Other 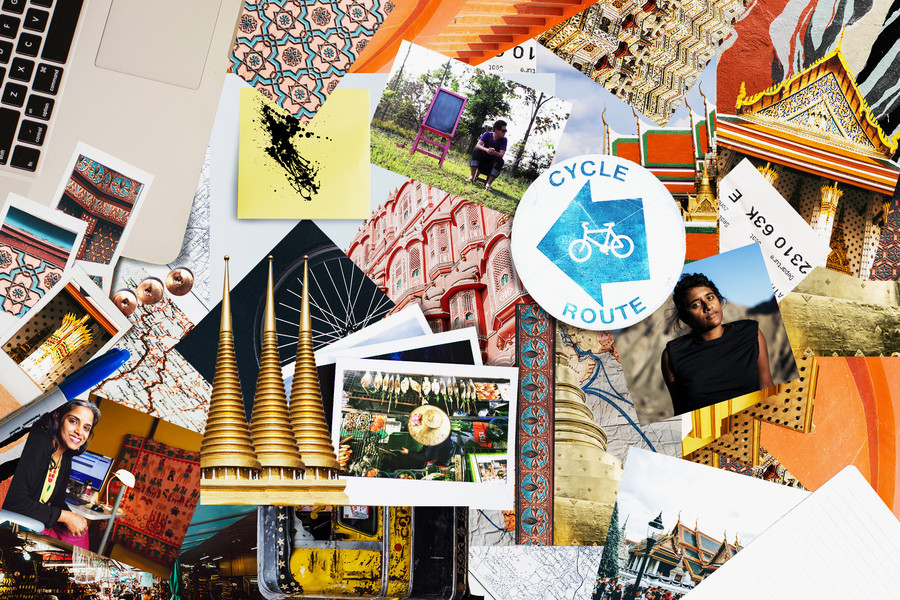 What is travel writing without the Other? Literature about traveling and adventure has a long history of evoking an Orientalist imaginary of Asia as perpetually exotic and dominable, a perspective that persists, even as a crop of new writers of color emerge. During the Age of Discovery, as European conquest principally spread across the globe, “travel literature, imaginary utopias, moral voyages, and scientific reporting brought the Orient into sharper and more extended focus,” according to Palestinian literary critic Edward Said. They sent rugged “observers” to foreign lands to report what they surveyed. “But all such widening horizons had Europe firmly in the privileged center, as main observer,” Said continued. “For even as Europe moved itself outwards, its sense of cultural strength was fortified. From travelers’ tales, colonies were created and ethnocentric perspectives secured.”

Books like Gérard de Nerval’s Voyage to the Orient (1851) and Mikolai Napieralski’s God Willing: How to Survive Expat Life in Qatar (2017) as well as the articles that permeate glossies like Condé Nast Traveler continue to promote this idea of the Other from a cis-masculinist, white, Western lens. But some Asian American writers are reorienting that narrative. Dr. Anu Taranath’s recent book, Beyond Guilt Trips: Mindful Travel in an Unequal World teaches privileged travelers—including those of color—tools to help them confront and check their power on their journeys. Jai Arun Ravine’s 2016 book, The Romance of Siam: A Pocket Guide, uses a subverted guidebook format to examine white people’s obsession with Thailand. And Mary Ann Thomas and Daniel Baylis’s 2018 photographic travelogue Asking for Elephants recounts Thomas’s bike trip across the Indian subcontinent as a queer daughter of the diaspora.

Their additions to the travel literature canon challenge a centuries-long practice, hopefully aiding in burying it for good. In this roundtable discussion, Taranath, Ravine, and Thomas discuss their experiences with exposing Orientalism in travel culture, confronting Otherness in their homelands, and what they’re anticipating about the future of travel lit.

You all transgress the travel genre in different ways. What made you choose these respective entry points to infiltrate that space?

Jai Arun Ravine: Thailand is such a tourist destination and a place of possibility for white America. As a person of Thai and white descent living in the United States, I feel like white Americans have much more access to Thai culture and belonging than Thais or mixed-race Thais in the diaspora. When I visited Thailand for the first time, instead of feeling a sense of belonging, I grappled with the constant feeling of being a tourist to myself. I chose the travel guide format in order to expose and understand this dissonance.

Mary Ann Thomas: While traveling through India, I found that Instagram was the most reader-friendly form of communication I could use to tell my story. I focused on telling stories that people wouldn’t find anywhere else, like what it’s like to ride with a group of Indian cyclists through a major city during Diwali or about biking across remote regions connecting [me] to my family’s immigration story.

I think of this as infiltrating the genre because we self-published Asking for Elephants and sold it primarily to communities I’d cultivated on Instagram—queer bikers, South Asian queers, bikers of color, and those at the cross sections of these identities. We didn’t need anyone’s permission to publish or distribute it and, when I went on tour with the chapbook, I found all kinds of subversive spaces, neither literary nor explicitly for travel writing, that welcomed me.

Anu Taranath: Beyond Guilt Trips blends memoir, creative nonfiction, social analysis, and pedagogical workbook. I had to write the book in multiple genres because I’m inviting the reader to think from multiple angles. When we have more opportunity to reflect about ourselves, others, the world, and how we learn and know, we are better positioned to be mindful travelers.

The Western travel genre and Orientalism are tightly wound together. What did you want to do differently in your books than what’s already in the travel section in bookstores?

JAR: I wanted to expose Orientalism for what it was and is; I hope to make the Orientalist question his entire existence. The Orientalist doesn’t ever look at himself. He seeks what is outside himself to create a more welcoming facade. I want the Orientalist to see himself in the mirror as ugly, horrific, despicable. What does he do then?

AT: Quite a lot of travel writing rehearses Orientalist frameworks and colonial tropes. I certainly wanted to critique that by giving readers stories to reflect on and tools to practice that interrupt these usual ways of envisioning “those people” or “over there.” Importantly though, I also wanted to provide a critique without losing the heart. Throughout the book, I’ve tried to embed a model of vulnerability and humility that’s rooted in radical politics, a way of pointing out what doesn’t work [while simultaneously] joyfully building what might work better. This, I find, is what many readers are drawn to.

The culture of pilgrimage in Asia versus the notion of a Western pilgrimage to Asia tell such different stories. Not to reinforce this binary, but what do you feel are the big differences between the conception of travel in the East versus the West?

MAT: Travel writing in the West—especially when related to outdoors adventure—is often rooted in conquering frontiers, where the Indigenous people are dehumanized and erased by an explorer whose experience of discovery is privileged over Native knowledge. When biking in India, I witnessed thousands of people experiencing different kinds of pilgrimages [and] as a child of Indian immigrants raised in the United States, I think there is something fundamentally different between embarking on a trip in order to discover something, versus walking in the footsteps of millions of people who have come before you in order to access something collectively holy.

Those journeys aren’t about an individual’s experience, but rather about one’s relationship to a larger whole. They’re still travel stories, but the concept of travel in India isn’t necessarily rooted in an individual leaving. I’m interested in writing about how no journey is ever taken alone and how, even when I’ve biked across continents, I’ve been held by massive nets of human compassion. My journeys are not taken as an individual; they’re taken in collaboration with the [larger] whole.

JAR: Pilgrimages are spiritual journeys where one visits a place to center themselves within their faith, to recharge, [and] to commune with the Source. Western travel is often packaged as a spiritual journey—one that is accessed through leisure, consumerism, and constant consumption. Western travel lures people with the idea of relaxation and enlightenment as an end goal.

AT: We sometimes think of the “going far” as real travel while our “regular lives” are somehow more pedestrian, familiar, and, well, regular. In Beyond Guilt Trips, mindful travel teaches us to pay more attention to where we are now, to consider who we are and who is around us, what our different lives are like, and how that came to be. We need not get on a plane to travel across identities and experiences. Instead, we need to pay better attention to people’s stories and struggles wherever in the world we might be, and learn to grow our care for one another.

Western travel is often packaged as a spiritual journey—one that is accessed through leisure, consumerism, and constant consumption.

Your books all consider the power dynamics of who gets to travel for leisure. As folks in the diaspora in the West, especially as women and gender-nonconforming writers, you’re often responding to power from a place of disenfranchisement. How did your books challenge your own complicity or complicated positionalities within tourism, in relation to proximity to whiteness, passport privilege, or colorism?

MAT: I had my travel partner by my side [in India] and his presence as a white man afforded us significant privileges because people wanted to please him and cater to his foreignness. Passport privilege is codified in India. For example, at certain tourist sites, we were seated in spacious areas with very few people simply because we were foreigners. On the other hand, tourist sites often charge foreigners ten times the amount that they charge Indians, which makes visiting places like the Taj Mahal slightly more accessible for Indians. It’s complicated! Because as a pair, we were so unexpected, we experienced certain privileges in really nuanced ways.

AT: I’m thinking about my own positionality, complicity, and navigation of the issues I write about. In my book I ask critical questions about Westerners traipsing the globe to save, help, fix, and learn about others in the Global South, often without enough conversation about the politics and ethics of these journeys. But [I] also have to ask myself: How am I complicit in structures of harm though I hope to live and travel with more care? I am an extremely advantaged Westerner who travels to the Global South looking to connect and help in small ways. What makes me different and not different from the kinds of critiques I write about? What makes my brownness, my wealth, my education, and my U.S. passport salient both at home and abroad, and how do I navigate these dynamics with grace and accountability? None of these questions make me comfortable, but they help me practice honesty.

You’re all responsible for upping the travel lit game. What do you hope to see more of in the travel space in response to or following the releases of your books?

MAT: I hope to see more stories [from] kids of immigrants about going to the homeland, diaspora, and the queer spaces we create when we can’t fully go back.

AT: Beyond Guilt Trips builds a framework to ask tricky questions, and models how we can hold space for discussion. [By] engaging with my book, I hope readers feel more empowered asking tricky questions and discussing tricky answers with their traveling companions, colleagues, classmates, and communities. I’m not saying that we’ll unlock the secrets of guilt-free or unproblematic travel after this or any book. What we might come closer to, though, is living with more intentionality and paying more attention to the stories of those who are both like us and different. And these small learnings can be the beginning of something big.