I enjoyed the action, playful humor, and killer retro soundtrack in Guardians of the Galaxy Vol. 2, as well as the developing relationship between Nebula (Karen Gillan) and Gamora (Zoe Saldana), two superpowered sisters traumatized by the worst dad ever, which is fresh and compelling in a franchise marked by a bro-ish sense of humor. However, this women-centered plotline was overshadowed by the mistreatment of Mantis (Pom Klementieff).

Mantis is emotionally abused throughout the film. Her master, Ego (Kurt Russell), exploits her empathic powers, a trait most associated with women and other female-identified characters.

He isolates her, so she barely understands social interaction. When she meets the Guardians, she’s negged by her ostensible protector Drax (Dave Bautista). He calls her “disgusting,” weak,” and “horrifying,” but follows up with kind comments that are meant to soften the blow. It’s an unpleasant, sexist undercurrent (How many times have you heard “He’s only insulting you because he likes you?”) running through an otherwise cheekily light-hearted film. While Mantis isn’t the only character who is subjected to Drax’s cruel comments, their growing friendship is key because it casts her in a subordinate position from the beginning. She evolves from Ego’s isolated servant to Drax’s bullied friend. With Ego, she understands her position is relative to his, but her innocence renders her unaware of the implications of Drax’s crueler comments. 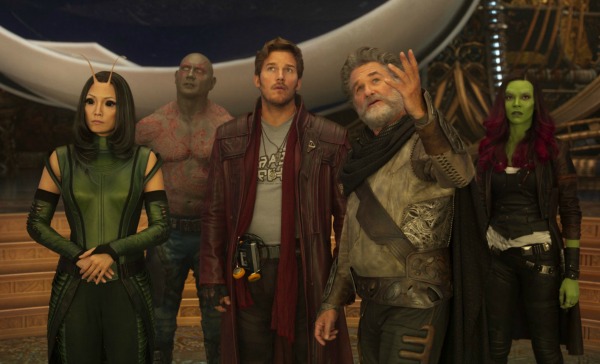 When studies suggest that anywhere from 41 to 61 percent of Asian American and Pacific Islander women are subjected to intimate partner violence and immigrant women in the United States don’t report abuse because of language and cultural barriers, it’s irresponsible to show verbal abuse of an uncomprehending Asian-appearing woman as a form of affection. Certainly there’s subtext for abused women in the film, most notably in Gamora and Nebula’s relationship. Their initial antipathy toward each other stems from the brutal training they received from their adopted father Thanos, who pitted them against each other to build up their strength. Nebula reveals that each time she lost to Gamora, her father replaced another piece of her body with machinery, fueling her self-hatred and anger toward her sister. However, their acceptance of the past comes from their acceptance of each other and the realization that their father is to blame for their trauma.

Mantis’s journey to joining the Guardians can be credited mostly to her “friendship” with a character who takes advantage of her innocence. Although Drax protects her from physical harm and Mantis helps Drax to access his buried pain about his lost wife and children, it isn’t enough to lessen the impact of his verbal abuse. Mantis’s past is a blank slate: She is an orphan, possibly the last survivor of her race, trained to be the companion and servant of Ego. Even though she isn’t Ego’s sexual partner, she is tasked with soothing him to sleep. Ego’s evil “expansion” plan is imperialistic, only adding to the subtext that Mantis is a colonized figure and one of his first casualties. She is educated by him, molded into, as she puts it, “a flea with a purpose.” Much of her character in the film is centered around her subordination; even though part of her storyline is breaking free from Ego’s control, that her friendship with Drax—the relationship that incites her rebellion against Ego—is built upon him insulting her isn’t much healthier. 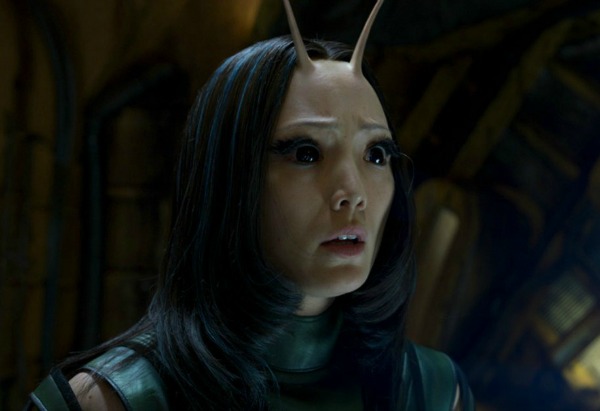 Unfortunately, Mantis’s appearance, character traits, and purpose also correspond to stereotypes of Asian women in mainstream Western cinema, including depictions of war brides brought to America from Japan, Korea, or Vietnam. Mantis is treated as a “pet,” and her ignorance of social customs—such as her innocent revelation of Starlord (Chris Pratt) and Gamora’s feelings for each other—is used for comedic purposes. While the joke is on the pair, it’s still playing on an Asian immigrant’s ignorance of Western customs, which has been played for laughs from Mickey Rooney’s bucktoothed yellowface portrayal of Mr. Yunioshi in the 1961 film Breakfast at Tiffany’s to the creepy, whispery Lilly (Hana Mae Lee) in 2012’s Pitch Perfect, who ate her twin in the womb.

Mantis speaks noticeably accented English, is dragged around by larger men (Ego and then Drax), and is physically weaker than the other main female characters. When Mantis first attempts to feel Gamora’s emotions, Gamora threatens to dislocate her jaw. Later, when Gamora and the other Guardians discover Ego’s villainy, she slams Mantis against the wall and chokes her, demanding the full truth about her master, which perpetuates stereotypes about Asian women’s delicacy and passivity even in the face of violence. It’s troubling that Mantis is the first target of the Guardians’ physical retaliation because she doesn’t participate in active combat and isn’t the primary instigator of destruction.

Guardians of the Galaxy had the potential to subvert what superpowers can look like for women in film. Mantis often uses her power of empathy to manipulate emotions or put Ego to sleep during the climactic battle for a reprieve. Most notably, when Gamora is choking Mantis, she defends herself by pointing out Gamora’s fear, which calms Gamora down from her violent paranoia. Yet it seems pointed that Mantis—portrayed by an Asian actress—is the only one with this defensive skill. Gamora and Nebula, played by an Afro-Latina and a white actress respectively, are depicted as more violent and physical, mapping more onto stereotypes that render white, Latina, and Black women more aggressive than Asian women. At any rate, any potential for real subversion is squandered when she is knocked unconscious by debris during battle and is carried offscreen by Drax, not putting much of a dent in Ego’s powers in the long run. 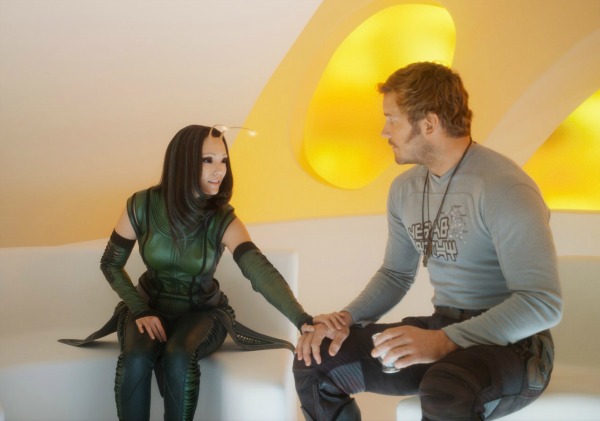 Mantis is not the only character portrayed by an Asian actress in the film. At the end of the film, Michelle Yeoh—known for her badass performances in the Police Story series, Crouching Tiger, Hidden Dragon, and Tomorrow Never Dies—briefly appears as Aleta Ogord, the leader of a Ravager faction. Yeoh, though, doesn’t stay long enough to provide an effective counterpoint to Mantis, and there’s no guarantee her role will be substantial enough to help complicate Mantis’s portrayal in future installments.

This treatment of Mantis wouldn’t be so glaring if there wasn’t a long history of Asian women being underutilized in science-fiction and adventure films, including Looper and Ex Machina, which are both coincidentally lauded for empowering women. Unfortunately, both are also driven by the dead bodies of Asian women. In Looper, Bruce Willis is the future self of Joseph Gordon Levitt’s character, Joe; in his future, he is married to a never-speaking, unnamed Chinese woman (Summer Qing) who is killed by the Rainmaker, a futuristic hitman hunting down loopers. This drives him to the vengeful actions that propel the film. In Ex Machina, Oscar Isaac’s creepy version of a Silicon Valley–genius has a thing for Asian women, including Kyoko (Sonoya Mizuno), a near-silent, non-English-speaking, sexualized Asian robot whom he sleeps with and exploits with impunity. When the protagonist discovers other female robots he’s discarded, it’s clear that he has a specific desire that rests on a stereotype. While Kyoko does contribute to the escape and empowerment of the main white-appearing robot, Ava (Alicia Vikander), it’s at the expense of her own life.

Mantis is a continuation of sci-fi’s inability to portray an Asian woman without drawing upon dehumanizing stereotypes.

Mako Mori from Pacific Rim is a notable exception. She not only has a clear, empowering narrative arc but is never overtly sexualized or senselessly incapacitated in favor of the male characters’ heroism, to the point that a new feminist test for movies was named in her honor. On the other hand, Ghost in the Shell’s version of the Major is a horribly bungled, whitewashed adaptation of a powerful Japanese feminist icon. 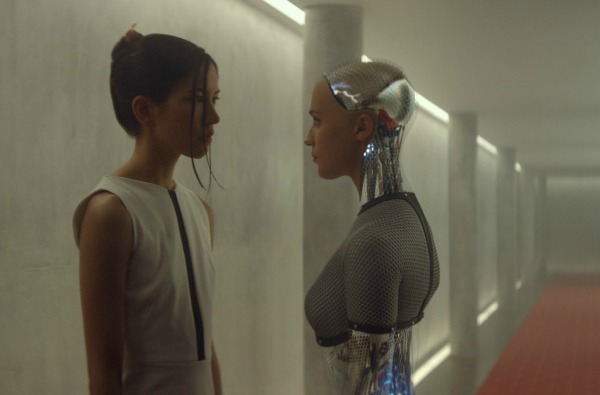 Perhaps the mistreatment of Mantis would be less glaring if she were given an arc beyond naiveté and innocence. Perhaps that will be rectified in future installments. Maybe she and Aleta Ogord will become partners and kick ass throughout space, but I’m not holding my breath. Even though these films are about reimagining what the world could be, years of watching and loving genre films tells me that Asian women can’t be the hero, can’t be complicated, powerful, or mature, can’t be more than the helpmeet or lover of the heroes and villains, can’t be the jokester as opposed to the butt of the joke. I’m probably going to watch future Marvel films and, yes, even future installments of Guardians of the Galaxy. That being said, when the Guardians of the Galaxy save the universe once again, I hope that Mantis stands proudly with them, a full-fledged Guardian and character in her own right.

I hope that she tells Drax to stop with the insults if he doesn’t want to lose her friendship, and if the franchise develops their relationship, I hope that Drax listens and changes. I hope that when I see the next Guardians, I can see myself mirrored in her, not with shame, but with pride. I hope that she’ll make me want to jump onto a spaceship and see the stars, and be the kind of adventurer women like me almost never get to be. 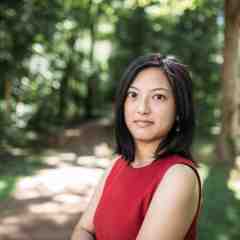 Anna Cabe is an MFA candidate in fiction at Indiana University and the nonfiction editor of Indiana Review. Her work has appeared or is forthcoming in The Toast, SmokeLong Quarterly, Joyland, Necessary Fiction, Cleaver, Expanded Horizons, Noble/Gas Qtrly, and Split Lip Magazine, among others. She was a 2015 Kore Press Short Fiction Award semifinalist, a finalist for Midwestern Gothic’s Summer 2016 Flash Fiction Series, and a finalist for the 2015 Boulevard Short Fiction Contest for Emerging Writers. You can find Anna at annacabe.com. 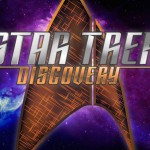 by Carly Lane
The new show will center on a female lead. Will Star Trek get her right?