Ask Auntie Randaon “The Simpsons” and handling your family's fatphobia 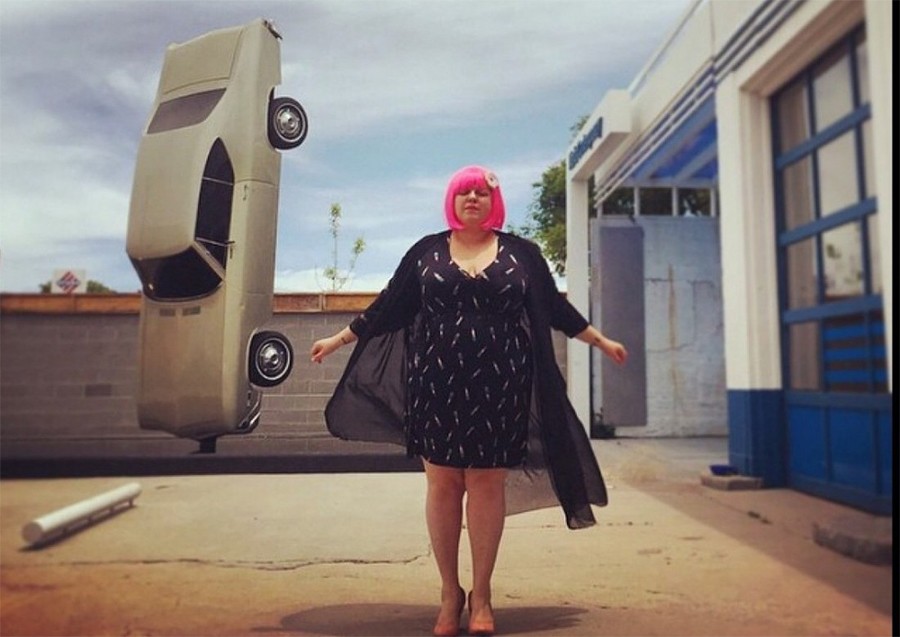 We need help navgiating 2018 so we live freer than we did last year. There are few better people to help us through these times than Randa Jarrar, award-winning author of A Map of Home and Him, Me, and Muhammad Ali. Every other week, our new advice column “Ask Auntie Randa” will post on Wednesdays and be devoted to your questions seeking advice for life’s complexities especially health, sex, Muslim stuff, and identity (we extend an extra hearty welcome if the quandaries are about first- or second-generation living). Have questions? Send them along to Randa: randa@b-word.org.

What do you think The Simpsons would be like as an immigrant family? And how would The Simpsons handle being in a refugee crisis?

The Simpsons are definitely already immigrants. The oldest daughter is an overachiever. The boy gets away with pretty much everything. The youngest is constantly babied and coddled. Homer is overworked but also incredibly lazy. It’s like he knows what the national narrative around his immigrant body looks like. And Marge. Oh my God, Marge. Marge is every single annoyed, over-extended, under-appreciated, immigrant woman I know. She’s way hotter than her husband. Her sisters, Selma and Patty, chain-smoke and criticize her ceaselessly. They’re both above criticism themselves, of course. The sisters’ last name is Bouvier, which is a fake French name, and if that doesn’t prove that they’re Lebanese, I don’t know what does.

In a refugee crisis, it’s my opinion that the Simpsons would fare pretty well. They’re already used to having only one outfit to wear. Homer would be a permanent fixture at the tea place, eventually talking someone into letting him drink tea for free. Marge would cook for the entire camp. Maggie would continue to eat nothing but her pacifier and be a baby, with some predictable shenanigans around her crawling near portable stoves and bags of cement. Bart would be quickly radicalized into parenthood, and would become a teenage father, working and caring poorly for his kids. Lisa would work with the camp’s women to bring educators on board from several different artistic and scientific backgrounds, so that the camp’s children would still be able to learn. She would also quickly learn to use the pigeons in the area as communication devices, sending messages to nearby camps and areas detailing her own camp’s medical needs. She would start a nightly embroidery meet-up. Selma and Patty would just hate on everyone, but they’d also go to the meet-up.

After about two years in the camps, they would walk, overnight, across borders to the next country. During this night-walk, Homer would almost die, but somehow, survive (Marge carries him the last five miles). Marge would, within a year, find a UN agency that would be willing to take her, Lisa, and Maggie to Germany. She would decline, because she is blindly loyal to Homer, probably because her own father made her work daily for his love and affection.

Bart would stay behind with his own family and kids, and build skateboards for the camp’s children. Eventually, a white woman and her white boyfriend would meet Bart in the camp and make a short documentary about his skateboards, then buy them from him and sell them to other white people in America. Dave Eggers might hear about this and write a book with Bart about his experiences.

Homer, after thirty years of poor eating habits, would have a cardiac arrest and die.

Marge and Lisa and Maggie would mourn him dutifully, bury him, and start a scholarship in his honor. Then, they would all approach more agencies to help them. Lisa would find them all a sponsor in Spain. There, they would thrive.

After years in exile, Lisa would eventually take baby Maggie with her back to her own country, and they would try to rebuild it together. This would be very difficult on them both; on Maggie since she is an infant, and on Lisa, because she has to daily fight authenticity issues. She handles it all with the help of her girlfriend, who never left, and is strong and wise, though often behaves the way Homer did at home. Marge would stay in Spain with Diego, her new husband, who is unattractive but loves Marge and insists on doing all the housework.

I’m fat, and I almost never want to go visit my parents, because they constantly bring up my weight. I have been fat for almost fifteen years. I was a chubby child, a thin-ish teenager (because of an eating disorder), and am now a fat woman, in my early 30s. I don’t want to lose my relationship with my parents, but I also don’t want to be treated like shit. It’s literally the first thing they mention when they see me. We’re Brown, and I don’t understand why they can’t see that every woman in our family, including my mother, is not thin.

What should I do?

First: I totally feel you on this. My family was like this for a very long time.

Next: Be ready for them to bring up your weight. It’s going to happen.

Be prepared to tell them, as soon as they say something, that, You know, you’ve been thinking about it, and you’ve decided that your weight and size are not up for discussion.

The first time I had to do this, I did it in Arabic, and it sounded weird. But after a while, I was used to it, and repeated it often.

Try it. My body is not up for discussion.

You can’t control their fatphobia, but you can control your reaction to it.

You can also drive away or walk away, if you are able to, or call a Lyft and leave if things get unbearable.

Also, aim for four to five days with them, max. Try to be mindful of anything you say that may seem like an invitation for them to discuss your body. For example, don’t ask for their validation on your new skirt/dress/pants, etc. They literally do not want to validate you, because they believe that being nice to you will mean you will never lose weight. They’re fucked up.

If with all of this, they still try to discuss your body, you may have to tell them that your visits will end if they can’t stop talking about it. This part is hard. You have to mean it. I cut my mother off for two years. Did not see her for two years! Because she kept mentioning my weight.

In all of this, remember that you are lovable, and loved, and fabulous.

Randa Jarrar is the author of the award-winning books Him, Me, Muhammad Ali and A Map of Home.