Ask Bear: How Do I Talk to My Partner About Nonmonogamy? | Bitch Media

Ask Bear: How Do I Talk to My Partner About Nonmonogamy?

After a long string of unhealthy relationships, I suddenly find myself in something that feels deeply good with a woman who likes me as much as I like her.

I also live with a lot of baggage. Persistent chronic mental illness, PTSD from child and sexual abuse, plus all the delights of growing up trans. I'm living with it all very well these days, so I threw all of this out there—on the first date!—and she took it all in stride. It's like nothing phases her. She's got her own deep life experience, she gets it and has her own. And she likes me, she really likes (all of) me.

I don't know how I'm scared of this, but I am. I'm scared to ask her about her sex politics. I want to know whether she is monogamous, and how—if she's into playing with other people together, or playing but not falling in love, or any of it. But I'm scared that the very action of asking would cause her to think that I might be dissatisfied, which could not be further from the truth. But I know myself well enough to know that eventually I am going to want to step out from time to time, and I have learned in my past relationships not to wait until then to bring it up.

How do I find out what I can explore with this amazing person, while holding her strong in the fullness of my adoration of her? I really don't want to fuck this up, but I do really want to find out all the ways she likes to fuck.

I have been chewing on this for a couple of days now. After disclosing that you’re trans, and that you live with PTSD, and that you live with “persistent chronic mental illness”—and having that all go just fine—you’re worrying about how she’ll experience a conversation about non-monogamy and/or polyamory? At first blush, reading this question, I sort of shrugged my shoulders and thought: “Frock up one more time and ask her, the end.” Then I realized that you probably thought of that all by yourself and were hoping for perhaps a little more help.

I started kicking around the question of why this question is a sticking point. Why should it be easier to say, “I have spent time in a mental institution, and I needed to,” than, “I would occasionally like to be naked with others”? For sure there’s no shame in either one—or there shouldn’t be. But mental health stigma is a fact (a fucked-up fact, but a fact) and so on the face I would have thought that might be the more difficult disclosure. Telling someone you’re poly can indeed be challenging, but should it be harder than that?

One thing I wondered about: Are you worried that this will be the thing that makes her feel like you’re too much work? Does it trip your “too complicated” trigger? For sure it can be difficult to reveal ourselves honestly to someone we’re super excited about—the stakes are high, we want them to like us, we want to be seamlessly easy and in sync.

There’s also a piece here about desire—your mental health status and trans identity are things about you, but polyamory is about what you want, what you like. It has a volitional aspect, which makes it feel much more open to value judgments in a certain way. This ties into the way we are taught to judge people—and approve of or disapprove of them—based on their desires. When my middle kid started preschool at two-and-a-half, they started teaching them the rule “Don’t yuck someone else’s yum.” I found the lesson tremendously refreshing. We could all use a reminder that we shouldn’t harshly judge what someone else enjoys. Maybe one of the things in play here is that people have yucked your yum before, and you’re (legitimately) hesitant about it now.

Sometimes when I can’t sleep, I get on Yik Yak, the geolocated anonymous bulletin board app that’s used mostly by students, and offer my time answering sex questions for teenagers and twenty-somethings. The beginning few questions are always fairly ridiculous  (“Can I use a banana peel as a condom?”) until users get the picture that I’m serious and I know a thing or two. When the questions get real, they all have similar underlying themes:

2. Will other people think it’s weird if I admit I like this?

The answer to the first question is always “no.” The world is wide, people have all manner of tastes and predilections; whatever consensual activity you’re hot for has its own hotbed of enthusiasts and its own clickable fetish category on FetLife. But the second question is more complicated. We don’t tend to talk honestly about our sexual desires, because the mainstream narratives about sex are so pervasive and silencing. This is especially a difficulty for heterosexuals, because the script gets so heavily reinforced absolutely everywhere (kiss, grope, brief foray into petting and/or licking, dock genitals together using the Tab A/Slot B configuration, repeat) that it seems downright strange to say things. Anything. Even just “Hey, what do you enjoy?” or “Can I touch you here?”

When I talk to undergraduate women about their casual sex escapades, few of them report that hetero-style coitus is their favorite thing, but that’s what they end up doing. Why? Because that’s the expectation. They’ve seen a version of the wordless, unnegotiated progression eleventy-seven times in television, movies, ads, books, and so forth, and they’ve rarely or never seen a conversation happen (and if it does, it’s played for laughs).

The same thing is true about relationship styles. It’s not that people haven’t heard of polyamory or non-monogamy, open relationships, and so forth. It’s the disruption of the expected, reinforced, and heavily privileged script that I think makes us feel so uncertain and awkward about it. If you follow The Rules—if you date and then go steady and then get engaged and then get married and then have an affair—society finds this a more socially palatable outcome than if you date and then keep dating, while perhaps also dating someone else—or someones else. (This script, by the way, is sometimes called the Relationship Escalator, and you can read a bit more about it here). It’s assumed that if you are properly serious about someone, you’ll keep advancing the script, and that if you’re not doing that you must just be in a lonesome holding pattern until The One comes along. So of course it feels fraught to broach monogamy and polyamory topics with your new sweetheart! There’s a decent chance her socialization will cause her to misunderstand your sincere question as “I’m not serious about you.” Which, based on your letter—and the three paragraphs of superlatives about this woman that we edited out for space—I am feeling pretty sure is not the case.

There are so many ways this thing—the giant, hulking, culturally rewarded expectation that sucks all the air out of a conversation and muscles all the other options out of the frame—crops up in our lives. It comes up around gender, sexuality, embodiment, ability, relationship style, religiosity and a thousand others. Sometimes people can elbow themselves a little room and put a narrative thread into the cultural stream that’s different, like this lovely article in the New York Times about a composer and an educator in a dominant/submissive relationship or this adorable polycule that commissioned (and is now selling) their own poly Valentines. The public resisters give us two things: a possibility model that allows us to see our desires made manifest and a precedent, so that when we tell our friends or family what we’re up to we have something to point to.

(Ask me sometime how many times, while my husband and I were discussing our reproductive choices with others, I had to say the sentence “Yes. Like that guy who was on Oprah.”)

I am aware, Brave Correspondent, that most of what I have discussed above is not advice, per se. What I hope is that it gives you a way to frame the conversation, to anticipate what the talking points might be and craft your message so as to pre-empt them a bit. I want to encourage you to particularly name this piece around expectation and how it creates conformity the more we feed it. If 10 percent of American adults are or have been in some sort of open/non-monogamous/polyamorous relationship then she should already know plenty of folks who have had these conversations. But she may well not. Talking about the ways in which we buck any kind of cultural script is difficult—they open us up to lots of questions we might not want to answer, they allow people an avenue to judge us based on their own perception or understanding. This is tough stuff, and not to be taken lightly.

On the other hand, there is a solidness and a sweetness to authenticity that can’t be overstated, even (or especially) if some of the things about you are unconventional. Once the titillation factor is dispatched, my conversations about being polyamorous with monogamous people frequently result in the admission that they’ve considered it, or that they’ve cheated and wish they hadn’t, or that they wonder if they could ever get their partner on board with that idea. And here you are, Brave Correspondent, doing the big work of bringing every possibility to the table; making room between the two of you for this conversation to happen regardless of outcome. No matter what her desires around monogamy may be, I sincerely hope she desires a partner who is prepared to stand in the shadow cast by The One True Way, click on a light, pull up a little settee and get to talking.

Related Reading: In Mainstream Media, Polyamory is Getting More Attention.

what a thoughtful response! amazed at all the pieces of the picture you brought to this conversation. 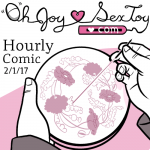