Ask Bear: I Don't Drink. Should I Start? | Bitch Media

Ask Bear: I Don't Drink. Should I Start?

I’m a butch approaching thirty who doesn’t drink and never really has. I’m now feeling conflicted about whether or not I should start.

The reasons for my abstinence have been partly situational: I grew up in a family where very little alcohol was around. For a while I had a health condition where alcohol was proscribed. My decision to not drink has also been deliberate: I feel like I have the potential to really struggle with alcohol. My drug use hasn’t been intense, but it’s been extensive enough to teach me that when I like a substance it becomes preoccupying in a way I don’t like. From the handful of times I’ve had a glass or two of something, I know I’m a fan of alcohol.

I’m torn between feeling like I’m missing out on a sublime form of adult pleasure and feeling genuinely worried that alcohol will take over my life. I feel silly sounding so dire about it when I’ve never even gotten super drunk. But alcohol feels uniquely accessible in a way that makes me nervous.

I increasingly feel like I’m missing out on something delicious and pleasurable (though I have lots of other delicious and pleasurable things in my life). And I’m curious: I want to get to taste all the drinky things, and try getting drunk and watching movies, and come home from a hard day and pour something that makes me feel better. I’ve also managed to make it this far without that, learning to manage hard feelings without substances, and from my perspective that seems like a sort of accomplishment that I don’t want to throw away.

So I guess I want to ask you, Bear, what you think the value of alcohol is and if you think it’s a worthwhile risk for me to explore it?

I am pretty sure that you know the answer is “don’t start.” The longer version of your letter was even more clear than this edited version about ways and reasons that substances have not, historically, been your friend. Taken all together, this is the kind of problem that makes me think of Ode On A Grecian Urn: “Heard melodies are sweet, but those unheard/ are sweeter…”

The truth is, Brave Correspondent, alcohol is not that great. It can lead to a chill vibe or give you a place in a certain kind of lowered-inhibitions playful atmosphere, but it can also wreck you. What alcohol mostly ends up being is a social lubricant: it’s a signal, in which a group of people all agree nonverbally that they are prepared to enter into a short-duration period of either sharing confidences or behaving a) rudely, b) lewdly or c) both. That’s a hard thing to negotiate in words, especially in our North American reluctance to ever talk about important things because we find it “awkward.” So we have learned, culturally to use the shorthand of “having a few drinks” to signal our willingness to get honest, get rambunctious, or both. It has never been clear to me how much the alcohol itself actually helps with that. I’ve often been the nondrinker in a group if drinkers, and I find that I can allow myself to participate just as well without drinking as with (until people get sloppy, at which point I just want to hook them all up to IVs and then take my tired ass home). But most of the fun part is really just the choice to let yourself off the hook of social expectation a little bit.

Also—as you point out—you have made it to your thirties without relying on self-medicating with alcohol, and that’s a lot. Queers particularly often struggle with substance use, because our reality can be really challenging or confusing and opportunities to escape it physically can be rare, especially when we’re younger. LGBTQ people have a rate of substance misuse or addiction that’s something like three times higher than that of straight, cis people, because Culturally Induced Stress is a very real thing and we all have to survive it somehow. So, we learn to escape mentally. I suppose somewhere there must be some young queers or trans folks who taught themselves transcendental meditation or astral projection in order to save themselves from the exhausting or unsafe or homophobic situations in which they found themselves, but I think it’s a lot more frequent that people just rinse away the bad feelings with whatever drug is most easily available to them – often alcohol, because that’s what they can get their hands on.

As a behavior, self-medication is completely understandable and sometimes a very useful survival tactic for terrible situations. There’s no shame in it or there shouldn’t be (even if there are sometimes unpleasant sequelae)—some people would not have made it through their childhoods without substance use, or could not survive their current circumstances without. Queer and trans lives can be really hard. We are really all just doing our damn best around here. The downside to substance use, though, is that it really does keep you from doing much emotional growth while you’re using. Through whatever combination of good luck and diligent work you’ve been able to avoid that, and that’s good news. No need to buy trouble on sale, is there?

You don’t need to drink to make nice drinks, by the way. I have learned to choose gin for beloved people who love gin by smell—I smell the ones they like and then I smell others to see if they share interesting qualities. I mix drinks using the whole entire internet as my recipe book (when certain people get home I am going to make them a gin and tonic with some of the brine from spicy pickled pineapple added, but don’t tell). Mixology is a fun game anyone can play, if it pleases them to do so. But interestingly, I don’t find the alcohol under the sink a temptation in the same way I don’t really think twice about the TV in my hotel room—it’s just sort of… not there for me. Somewhat like you, I’ve written both off as real.

There’s another big thing I want to say about this, Brave Correspondent, in case they bear on the question for you or for others. One is that we all experience songs unheard/grass is greener syndrome sometimes in our lives and that part of being a grown person is being able to sort through that question: Would it really be nicer to trade what I have for the thing behind curtain number two? The answer to which, of course, is “maybe, maybe not.” The important thing here is that you develop a system for making these decisions, rather than taxing your therapist with them some more.

Developing such a system requires you to identify both your values (what’s important to me in the world?) and your goals (where do I want to be going?) and then checking in about whether there’s a choice that aligns with those things. There are rarely perfect choices—everything comes with downsides—but there will always be some choices that will draw you closer to your core values and some that will pull you father away. Having a solid compass—which takes time and investment to develop and refine as time passes—is an important life skill and a very useful tool. With it, you’ll be able to see that you don’t have to re-invent the wheel with every decision, you just have to put the options into your matrix and see what it looks like.

That’s what it looks like to steer your course, Brave Correspondent. Sometimes the correct decision, the one that aligns with your values, is a scary one—leaving your job and going freelance, moving, going back to school, leaving your partner and going solo, etc. The rest of the world also likes to give a lot of feedback about these decisions based on their own biases and fears and relationship to cultural norms. At the end of the day, though, if you know where your own personal North is you’ll always be able to figure out which of your choices is most in that direction and set off, Brave Correspondent. You can make change and stand in the sunlight it admits.  I will be raising a glass of sparkling apple juice to you from here as you go. 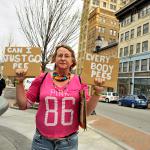 by Sarah Mirk
How did our most humble piece of infrastructure become a cultural battleground?