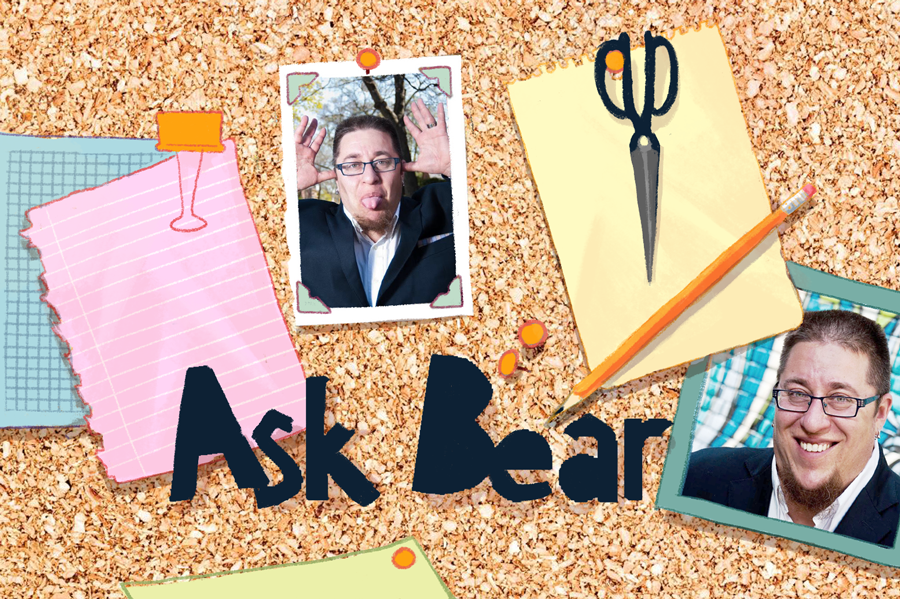 Ask Bear is an advice column written by S. Bear Bergman. Bear is a busybody know-it-all with many opinions who is only too happy for a sanctioned opportunity to tell you what he thinks you ought to be doing (as well as a writer, storyteller, publisher and activist who enjoys telling educational institutions, health care groups, and portions of government what he thinks they ought to be doing). To submit a question to Ask Bear, email asking.bear@gmail.com. Questions will remain 100 percent confidential, and may be edited for length.

Is “this just isn’t enough fun for me” a legit reason to leave somebody?  My partner and I have been together a few years and this relationship stressor continues to come up.  He likes TV and movies.  While I enjoy a (literal) Netflix and chill as much as the next guy, I also like water parks, stargazing, road trips, and days in the lake.  I have other friends and can usually rally other people to do these things, but I’d like him to have fun with me, too.  He’s sometimes willing to try things, but is usually grumpy or anxious when we’re out of his comfort zone.  We have defaulted to just watching lots of TV together, leaving me unfulfilled.

Our struggles and successes go broader and deeper than that, of course, but fun is a recurring theme that remains unresolved, and at this point, seemingly unresolvable.  The biggest thing to his credit is that he is steady and steadfast. To me, his life seems like a ferry, chugging along diligently, while I am more like a balloon losing air and bouncing off the walls.  While I have been known to have one foot in the relationship and one foot out, he waits patiently with both feet in.

The thing I want to say, before I start answering your actual question, is that there’s actually no such thing as a not-legit reason to leave a relationship. There’s no Standards and Practices committee; you are not a signatory to the Breakups Treaty of 2007. Anyone can end a relationship for any reason if they want to, and even if the long run shows it wasn’t in your best interest you can still do it, and people who try to argue you out of breaking up are generally just proving your point for you. But if you’re regularly headed home and wishing you were going somewhere else, listen – that’s big deal.

Before you go home and make yourself single, though, I’d like to offer a few thoughts and suggestions. I am answering this letter in part because I recognize myself in your question, as a person who is a bit of curmudgeon and somewhat inclined toward homebody-ness who lives with a let’s-get-out-and-do-things! sort of person. I want to offer you the strategies that have made things work for me, both in my household and with my friends and lovers, and also talk about some other ways people may be able to balance each other.

In my experience, when people compromise they generally identify what each one really wants and then choose something acceptable to both. That’s not a terrible method overall, and some people find it quite satisfactory, but it has never worked that well for me. I don’t get a solid hit of pleasure or satisfaction. For this reason, I am prone to the kind of compromise that works like this: this time you get what you want and I will be a good sport about it, next time I get what I want and you do the same for me. It doesn’t always have to be a strictly turn-taking situation, you can just aim for a close average over time.  The key point is that everyone gets to have exactly what they really want sometimes, and without a lot of grousing. Perhaps this is a situation that could work for you?

Is it possible that your person just has home inertia? They get home, and then the idea of putting pants back on and going out requires basically an act of Beyoncé? What if you met somewhere after work or school, or started making a weekly date to break the couch habit by checking out something in your neighborhood or the next town over. Walks after dinner, stroll to brunch, that sort of thing? Your image of a ferry, chugging along, may work in your favor here—in that once you get them moving with a relatively low-commitment activity, like a stroll, you might then propose something else to go on to while you’re out and perhaps get a better response (I am not saying that this works on me, but: this totally works on me, and my people know it).

Ideally, what can happen is that you’ll meet somewhere in the middle—you’ll probably go out together a bit more than he thinks is ideal and a bit less than you prefer. When people in relationships are pretty far apart about something and the relationship is in a good and healthy place, they move closer toward each other over time. Distant positions balance each other out. When the relationship or its behaviors are not so great, people get polarized; they become entrenched in their positions and start thinking about always/never, without shading or nuance.

I’m going to say that you should also check in about their level of anxiety around particular activities. Maybe some of the things you like best make your person too stressed out or leave him drained from the attempt at fun to do the things he actually enjoys. Maybe there’s some depression at work, or maybe some health/pain/energy stuff, or upsets around gender or embodiment. It can be really hard for some people to go outside, where the rest of the world and their stares and their comments and so on are also kept. I think you need to tread tenderly around these questions, but I also think you need to ask them first of yourself and then of your partner. Is there an underlying piece that is keeping him on the couch out of a sense of safety there?

But really, Brave Correspondent, there’s a question here of how you’re feeling about this relationship as a whole. Is this thing about going places and doing things a placeholder for a bigger problem about feeling like this person is keeping you stuck? One of the things I value most in a relationship is feeling met, feeling like a person is on my team and has skills and talents and perspectives that complement mine—not all the same ones, because that’s boring, but also not so different that we can’t work together. If this guy is totally on your team and you feel both supported in your big doings and like you get to support him in his big doings, but he just really likes to watch TV a lot, that’s one thing. But if you feel like you’re always trying to drag him uphill toward more engagement, more responsibility, more…. something, then that’s a whole other ball of cheese.

Relationships should make you feel emboldened and empowered. You should feel like you can risk more because you’re going to be caught, stretch further because someone has hold of your belt, recover faster because you’re being nurtured and loved on and made homemade mushroom barley soup and beet/apple/ginger juice. If you’re getting that, if he’s a rock off of which you can launch yourself to ever greater heights, then join the local hiking club or make a karaoke friend or whatever and kiss him goodbye sweetly while you go off and do your things. A person who is fairly still can be a harbor, Brave Correspondent, it doesn’t mean he’s a boat with no motor. But if you’re not feeling the safety of his embrace as much as the sense of being impeded by it, then maybe it’s time to take both feet out of the relationship and walk them somewhere you feel more and better met.

Relevant: Ask Bear: What If My Relationship Has An Expiration Date?

by S. Bear Bergman
A couple gets along great, but one of them is planning to move thousands of miles away. What do you do?