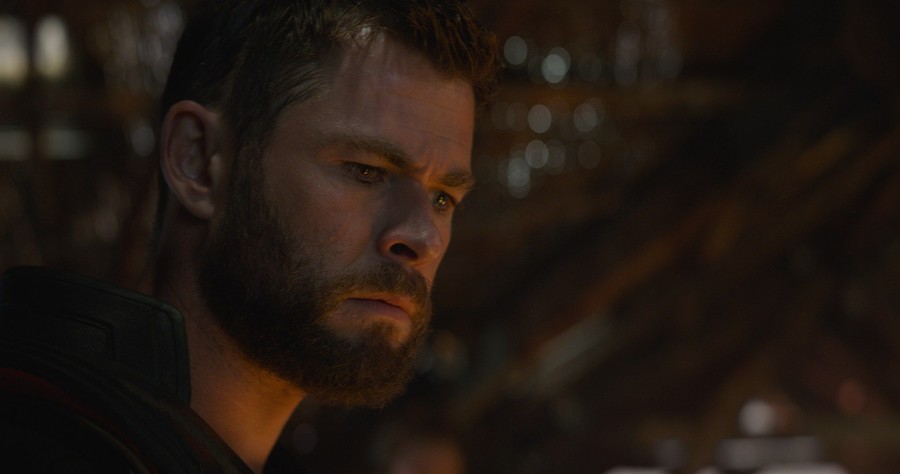 After 11 years, even the Marvel Cinematic Universe’s most diehard fans can agree that Thor Odinson, God of Thunder (Chris Hemsworth), hasn’t had the most thorough storylines. Aside from 2017’s Thor: Ragnarok and his inclusion in the original Avengers, our sweet golden retriever of a Viking god has largely been mischaracterized. So it’s unfortunate that the Avengers’ ostensibly final big-screen outing continues this tradition by making Thor the butt of the joke in a hugely depressing way. As Endgame reintroduces us to the superheroes in a post-Thanos world, we find that Thor is now a fat alcoholic holed up in a messy house and suffering from depression, PTSD, and survivor’s guilt. As BuzzFeed’s Jenna Guillaume pointed out, Thor’s weight gain itself isn’t the problem; what’s troubling is that the movie prompts audiences to laugh at Thor’s distended belly and sloppy appearance, the physical manifestations of his misfortune. Endgame doesn’t allow us to many moments for people to empathize with our down-but-not-out hero.

Our resident demigod has come a very long way since his eponymous 2011 film. Thor has been incredibly vain, arrogant, and selfish, but after losing so much in Ragnarok, he’s deciding to set his pride aside. Ragnarok literally strips him of everything he thinks make him great (the blond hair, the gorgeous eyes, the hammer) and then reminds him he is still Thor and can be greater. Infinity War teaches him there are still things to fight for even when he thinks he has lost everything. But by the end of that film, all that he’s gained is snatched away once again. By the time we see him in Endgame, he’s:

Despite their best efforts, the Avengers, can’t stop purple space thug Thanos, and Thor takes their defeat the hardest because he believes their loss falls squarely on him. Thor has long been positioned as a powerful demigod and a superior fighter with a chiseled, indestructible body. In Infinity War, Thor’s thirst for a good fight and his desire to avenge his fallen comrades comes to a poignant climax when he takes the full blast of a burning star to make a new hammer that will defeat Thanos. He’s a warrior who understands that his body is a weapon that can be sacrificed for the right cause. So it makes sense for Thor to break down after such a tremendous loss. Unable to defeat Thanos not once but twice, he takes out his guilt and disappointment on the weapon that has failed him.

Endgame opens with an inventory of Infinity War’s emotional toll on the surviving Avengers: Steve Rogers (Chris Evans) hasn’t shaved in years; Black Widow’s (Scarlett Johansson) eyebrows are missing; and Tony Stark (Robert Downey Jr.) has been trapped in space for more than 20 days, waiting to die. His oxygen supply dwindling, Stark is all skin and bones when he and Nebula (Karen Gillan) are rescued by Captain Marvel (Brie Larson).

Stark has always been as vain about his appearance as Thor—with constantly amazing facial hair to prove it—so his sunken eyes and dangerously thin limbs are jarring to see. The other Avengers are so alarmed by his weight loss that they hook him up to an IV and rush him to a bed to rest. Nobody laughs at his condition; there are no jokes about his resemblance to a scarecrow, a crackhead, or a starving child in a third-world country. Stark’s drastic weight loss is treated with gravity and seriousness because it’s the result of trauma—and nothing is comedic about trauma. Thor, on the other hand, is not so lucky.

When Bruce Banner (Mark Ruffalo) and Rocket Racoon (Bradley Cooper) come to New Asgard to recruit Thor for their great-time heist, we hear his voice first and then see his pot belly, which comes with its own cartoonish soundtrack reminiscent of the music that played every time Bulk and Skull appeared in the Mighty Morphin Power Ranger series. Thor’s body is played strictly for comedic effect: close-up belly shots, matted white-people locs, dirty clothes, and the ever-present beer in his hand.

Thor’s partners don’t hesitate to kick him while he’s down: Rocket says he looks like melted ice cream and calls him an “airbag;” Stark compares him to The Dude from The Big Lebowski; War Machine (Don Cheadle) tells him that he’s not worthy to wield the infinity gauntlet because he has “Cheez Whiz” in his veins. Even when Thor finds his mother, Frigga (Rene Russo), in an alternative universe, she ends their touching heart-to-heart by advising him to eat a salad. Hell, the only people who show actual concern for Thor are Bruce and Valkyrie (Tessa Thompson). Tony and Thor’s weight changes are both dramatic, drastic, and born from trauma. So why is Tony’s skeletal body taken seriously while Thor’s chubby one is treated as a punch line?

Thinness is usually considered evidence of good health, even in people who consume only Hot Cheetos and pink lemonade. While fatness—which is often complicated by race, class, gender, and other factors—is invariably associated with poor health, laziness, and indulgence. We’re quick to assume that fat people eat excessively and take up too much space while extremely thin ones don’t get enough food to sustain themselves. Thus, thinness elicits compassion, empathy, humanity, and kindness. Fatness does not. Endgame’s narratives about Tony and Thor put these opposing experiences in conversation with each other, yet manage to miss a key point: Society rarely makes room for trauma that results in weight gain. I’ve been so fucking depressed that I have forgotten to eat or simply stopped altogether—and lost a lot of weight. I’ve also gained weight when I’ve turned to food and alcohol to cope with depression. Though both situations were directly tied to mental-health concerns, I received concerned looks, touching comments, and even compliments in the wake of dramatic weight loss. Weight gain, on the other hand, brought judgmental comments, jokes, and pitying looks.

People rarely have empathy for fat people and trauma-related weight gain doesn’t magically generate it. In fact, there’s a longstanding assumption that fat people feel less pain or sadness than non-fat people, and that they both deserve and can handle less-than-human treatment. The trope of the “Invulnerable Fatty” recurs in sci-fi and fantasy narratives where fat characters realize that their bodies bestow on them an increased durability and strength, and a heightened ability to take physical pain or damage—or even experience neither. Marvel’s Big Bertha draws her power from becoming fat. She has to induce vomiting to return back to her supermodel size. American Horror Story: Coven’s Queenie (Gabourey Sidibe) is a “human voodoo doll” who avoids pain by transferring it to someone or something else. And Naruto’s Chōji Akimichi converts the calories he inhales into chakras and can change size depending how much strength is needed to win the battle.

Thor, even without a fat-fueled superpower upgrade, suffers near-constant ridicule and is denied basic empathy by his fellow Avengers. Though Endgame directors Joe and Anthony Russo considered the movie a “body-positive” superhero film, there’s nothing positive or affirming about fat Thor being the butt of his partners’ jokes. There’s nothing  positive about invalidating, overlooking, and ridiculing trauma and its byproducts —including survivor’s guilt, PTSD, depression, anxiety, or alcoholism—the moment a person’s body expands. Not only does Avengers: Endgame fail Thor with childish humor and underdeveloped writing, but it fails fat people who are already facing ridicule that can be compounded by trauma. 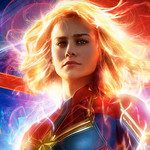 by Keah Brown
Carol Danvers is a badass. This is a fact, not an opinion.
by Clarkisha Kent
View profile »