Sorry, Not SorryWhen Men Won’t Actually Give Up Their Time 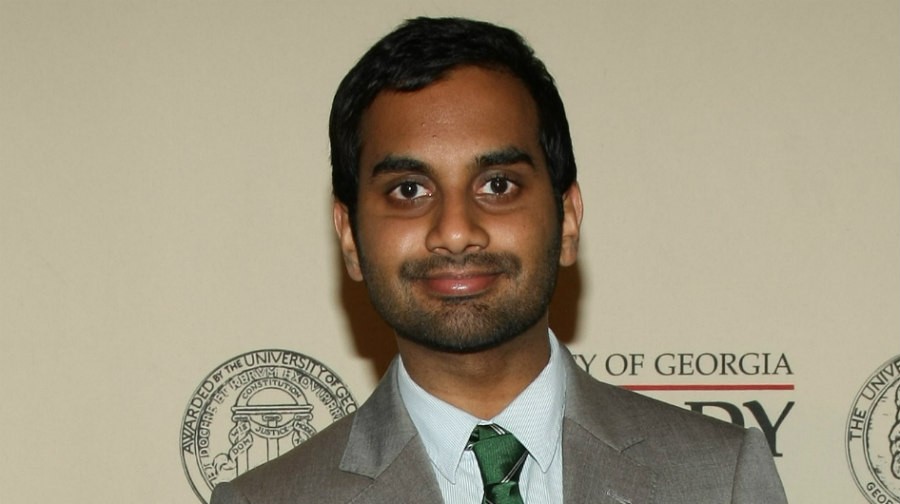 When I think about Aziz Ansari’s statement from last week, the thing I keep coming back to is that final paragraph break—the literal space—between his first two paragraphs and the third one. There’s this gap between his initial defense of his behavior with “Grace,” the pseudonym given to the anonymous woman in the story published by Babe, and his final expression of allegiance with all the women who have told their stories of harassment, assault, and rape over the past few months.

Or rather, it is the lack of space between these two things that says more than anything that was actually typed out.

“I continue to support the movement that is happening in our culture,” Ansari says at the end of his statement. “It is necessary and long overdue.” It comes just three sentences after he describes his encounter with Grace as being “by all indications…completely consensual.” There is no real transition between his description of the “sexual activity” during their date, which by Grace’s account was not completely consensual, and the larger context implied by that ending. He does not attempt to build a bridge for the reader or himself. There is no mention of assault, harassment, or abuse. We are simply meant to infer what the “movement” Ansari mentions is and why exactly it is “necessary and long overdue”—or what any of that has to do with him and Grace.

It’s not that the inference is hard to make, but the lack of effort given to actually describing what’s happening—the hesitancy to name structural oppression, let alone his role in maintaining it—while still claiming space as an ally to the “movement,” is as much a choice as the use of the word “completely” before consensual. And that tiny gap on the page, where so much could have been said, is the silent, inactive place where most men have chosen to remain when it comes to uncomfortable conversations about patriarchy. 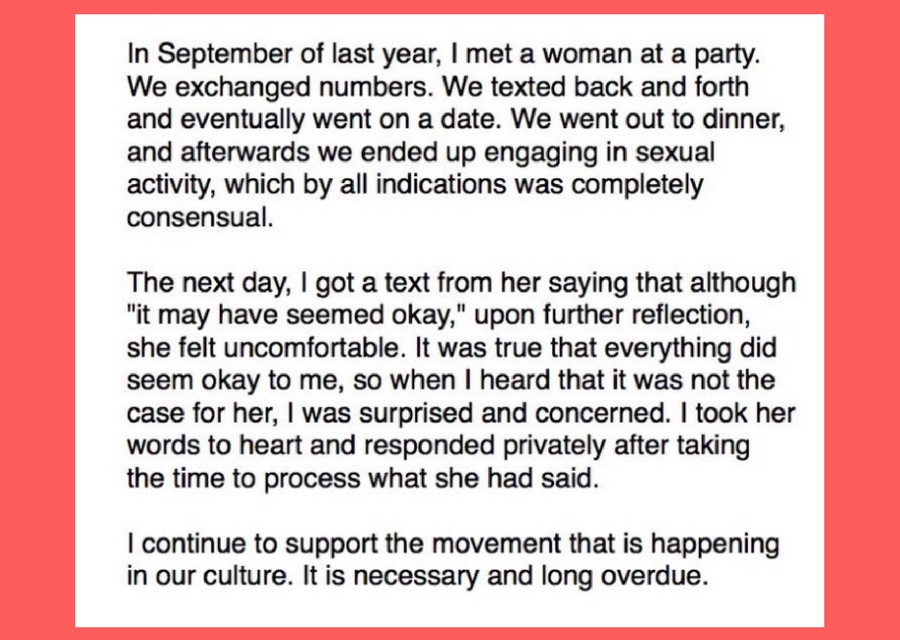 Ansari is not alone in this, even if he was also among those men who remained quiet on stage at the Golden Globes while wearing a shiny #TimesUp pin. That silence was echoed at the Screen Actors Guild awards over the weekend: Alexander Skarsgård once again failed to mention domestic violence while accepting an award for playing a rapist and abuser in Big Little Lies, and Sam Rockwell, winning for his part as a racist cop in Three Billboards Outside Ebbing, Missouri, finished his speech with a vague show of support for “all of the incredible women in this room who are trying to make things better,” which he also said was “long overdue.”

These statements represent just how little space most straight cisgender men have ever been willing to devote to really talking about gender, sex, and power. Or how much thought we’ve ever given to investigating what consent really means, and how it involves us. When James Franco appeared on TV after the Golden Globes, not only did he not voluntarily bring up the allegations against him, but, like pretty much every male actor who has been on TV this month, he also didn’t take the chance to center women or the #metoo movement (started by Tarana Burke.)

When directly asked about the accusations, Franco only briefly acknowledged the importance of victims being able to speak before telling Stephen Colbert, “Look, in my life I pride myself on taking responsibility for things that I have done.” Yet, Franco and the men who support him never take responsibility for the everyday ways in which they hold onto their power—pushing others away from the mic so that they can continue to speak.

The vagueness with which Ansari expresses his support in the midst of refuting a claim of sexual coercion is how most men choose to talk about the sexual violence that we have always known exists around us. It’s like the white people condemning Donald Trump for his “racist remarks” who will never venture into how they themselves help maintain white supremacy. We might write down the correct words, or include them in our art, but when the conversation comes to our front door, most straight cis men would rather defend our position than actually cede any space.

In that way, finding that gap in Ansari’s statement was like finding a mirror too, for all the times in my own life that I’ve been silent about the role I’ve played in perpetuating patriarchy. All the times I’ve become defensive about the power I’ve brought into my interactions with women. Not to mention the many times I didn’t challenge the misogyny around me. It is a glimpse, that pregnant pause, at the chasm that exists between the support of #TimesUp we might express publicly, and our actual willingness to give up our time.

Despite the brevity of Ansari’s statement, many have expressed disbelief that he had to go to the trouble at all. At The New York Times, Bari Weiss wrote that Grace’s story and the subsequent discussion about consent online “trivializes what #MeToo first stood for.” Meanwhile, Caitlin Flanagan at The Atlantic laments the “humiliation” of Ansari and how a “hit squad of privileged young white women” apparently “destroyed a man who didn’t deserve it.”

But the actual consequences for Ansari will continue to be minimal at best. “We do not live in a society where published allegations of sexual assault alone ruin one’s career,” writer Danielle Butler explained in an essay for Very Smart Brothas. “If it’s any consolation for the Weisses and Flanagans of the world, they may simply look to the likes of R. Kelly and the current president of the United States for solace in how little such accusations hinder powerful men from thriving.” Or look at Gary Oldman, who picked up an Oscar nomination this week despite his abusive past. No, a discussion about consent will never derail this movement, but if anything does, it might be that thing that has always protected men: our refusal to engage, and this reflexive desire to accommodate.

Time is valuable, as so many victims have emphasized in their statements. Yet the men taking up most of the space, money, and screen time in our culture have failed to respond to the literal nature of the current call to action. We have again left women with the labor of transformation. Some have donated money, but most have scoffed at the idea that they could be doing more. All while others insist on keeping the standards for how we treat women as low as possible, because perhaps they too fear disturbing the universe. 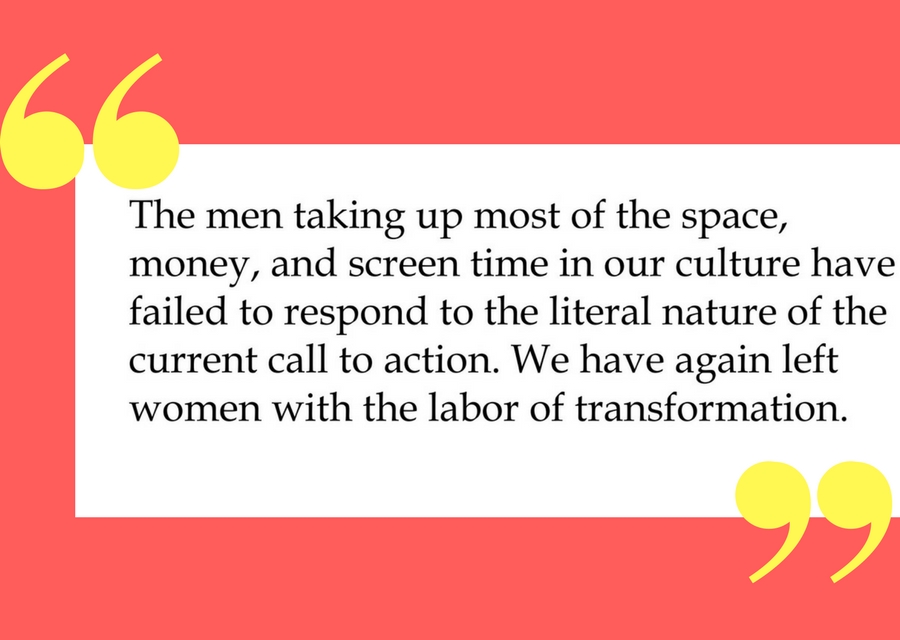 It’s exactly how we’re meant to behave in a patriarchal society. The path of least resistance is the white line between paragraph two and three in Ansari’s statement. It is the path that might allow one to acknowledge the pain of others—to sometimes even say “this is long overdue”—but to never acknowledge the connection between that pain and your everyday life. It’s the place where you learn to think about your own power as a neutral thing, as a fact of the world, rather than something you are actively maintaining.

Uncomfortable words always tend to get stuck in our mouth. Speaking about privilege as a man, or the reality of sexual harassment in your community, means placing a mirror in front of yourself. It might even make you look weak. It’s easier to remain quiet and pass this onto others, which is precisely why white men like Matt Damon emphasize the “preponderance” of innocent men instead of acknowledging their part in this system. Yet, this urge to delineate between “good” and “bad” men is itself a product of patriarchy, and just creates another hierarchy of masculinity—another claim to space. After all, the only way to be worth anything in this system, to feel like a “real man,” is to put oneself above someone. To dominate.

But taking the time to name our responsibility is the bare minimum we can do to interrupt oppression. If queer Black trans women can speak publicly about the sexual violence they’ve faced, then straight cisgender men can certainly risk some embarrassment or shame to say a few lines about power. We have to accept that we will necessarily stumble, but also that every bit of our space in this world that we don’t use to dismantle patriarchy is being used to keep it in place. 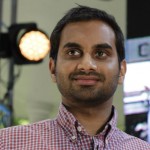 by Rae Gray
Aziz Ansari’s race is not an invisibility cloak that places him above reproach from white and nonwhite women.