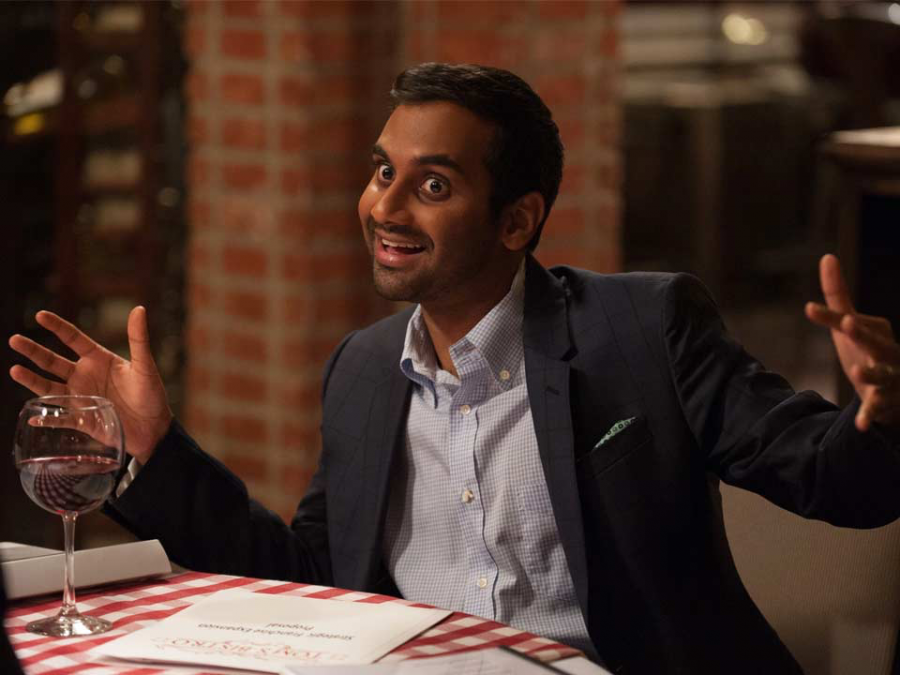 In all of my tens of thousands of hours spent watching television, Aziz Ansari’s new Netflix show Master of None is the first comedy to make me cry. The series created by Ansari and former Parks & Recreation writer Alan Yang premiered last weekend and is about an Indian-American struggling actor named Dev Shah (played by Ansari) coping with modern life and dating in New York. Dev is a rare character: a multi-dimensional Brown person at the center of his own show. By the second episode, “Parents,” the show had me in a tearful puddle. In that episode, Dev and his Taiwanese-American friend Brian (Kelvin Yu) explore the disconnect between their relatively comfortable lives as first-generation Americans and the harsh reality of where their parents came from. Sounds like a laugh riot, huh? I promise the show is as funny as it is thoughtful. 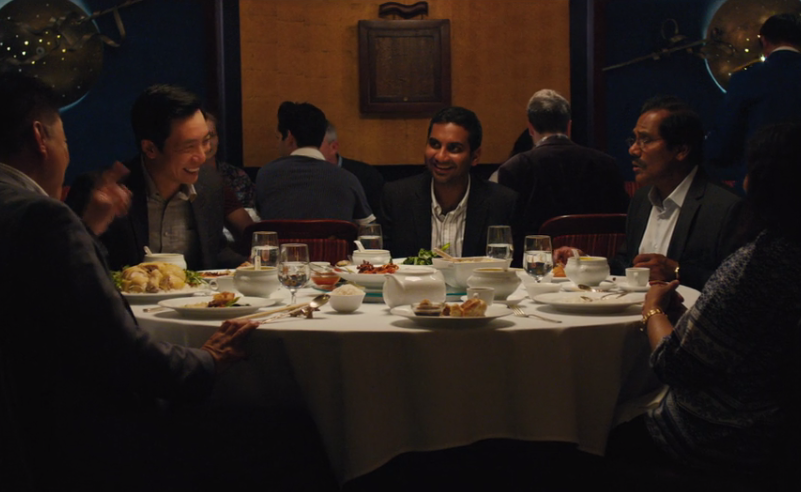 Brian and Dev bond with their parents while grubbin' on some Chinese food.

“Parents” highlights the gulf that often exists between immigrants and the children they raise in a new country. It’s a story that's so common for children of immigrants. But part of what brought me to tears, as a first-generation American myself, was realizing how painful and true and jarring it is to see our narratives reflected back at us on screens that have ignored our stories for so long. Master of None is like the older brother version of Fresh Off the Boat, the ABC sitcom based on the memoir of Taiwanese-American restauranteur Eddie Huang. Through spot-on comedy, the shows share stories that my generation has been telling each other to remind ourselves that we exist even though primetime television largely ignores us. In the episode, Dev and Brian realize that they haven't done enough to thank their parents for all they sacrificed to ensure that their kids were able to have such “fun” lives. So naturally, the friends take their parents out to dinner in order to learn more about where their folks came from. Dev and Brian's dads reminded me of my own father, a man of few words with a weird sense of humor and whose personal history is not something I know much about. (Inspired by this episode, I texted my dad to learn more about his childhood. Apparently he had a pet cat and dog as a child in a rural village in southern Vietnam. He said he called them by their colors: yellow cat and yellow dog.)

When I was growing up, if South Asian people were seen on TV, it was almost always through hackneyed stereotypes that flattened immigrants to two-dimensional characters thick with accents. Master of None gets at this directly. The episode “Indians on TV” begins with a montage of racist clips of Indian male characters in film and TV—many of the roles are played by white men in brown face. In casting Dev's Indian-born parents on Master of None, Ansari ended up choosing his real-life parents to play the roles. As Ansari told Fresh Air, when Indian actors auditioned to play his dad and read his lines with an accent, it felt like they were making fun of him. So why not just cast the actual people who don’t need to fake their accents? Real-life dad Shoukath Ansari steals almost every scene he's in and I can't imagine anyone else playing his son's fictional father. The content of this episode is also powerful: It looks at how white supremacy in Hollywood limits the number of characters of color—especially two of the same ethnicity—and tokenizes them in film and television.  “There can be one, but there can’t be two,” Dev tells Ravi (Ravi Patel), an Indian-American actor friend who is auditioning for the same TV role as Dev. A television studio head tells Dev that if two Indian guys starred in the same program, it would be labeled an “Indian show,” and therefore not “relatable” to a wide audience. Dev responds by pointing out that viewers don’t refer to shows with more than two white people as a white people show (although, I think plenty of people of color will often point out the whiteness on shows because that shit may not be “relatable” to us. Imagine that, the possibility that whiteness might not appeal to everyone).

Aziz tweets a response to all those reruns of Full House and Mr. Belvedere.

Dev's New York City is lush with nightlife in dark bars and restaurants, with well-dressed 30-sometings in really pretty apartments. If you're familiar with Ansari's stand-up, you might see bits of his routine pop up as banter between characters (like Dev's frustration with dating in a world of texting). During the course of the season, he lands a role in a “Black virus” movie (a film about a terrifying killer virus starring a mostly Black cast) with Todd Barry perfectly cast as the dismissive and disenchanted director. Other cameos include Danielle Brooks as Dev's agent, Claire Danes, and H. Jon Benjamin (who is also a voice actor best known to me as Bob Belcher on Bob's Burgers. I can't convey how weird it was to hear Bob Belcher talk about dildos and saying “Go fuck yourself.”). Ansari and most of the cast are naturally funny and their dynamic works, much of it supported by some great writing including that of Harris Wittels, a beloved comedy writer also from the ranks of Parks & Recreation who passed away earlier this year. 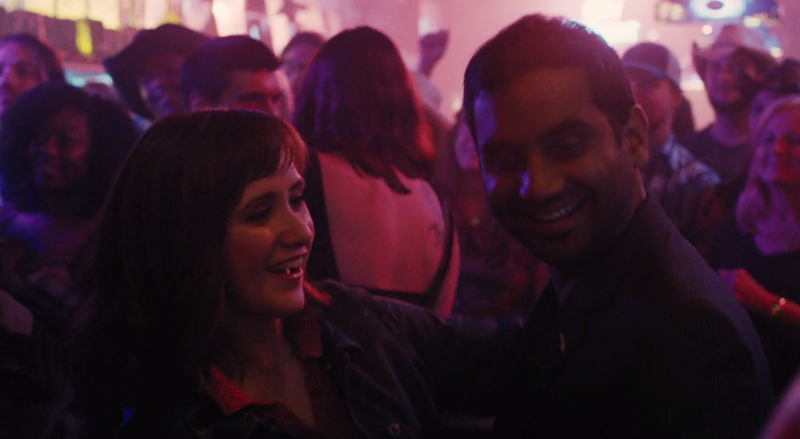 Rachel and Dev do some honky-tonkin' in Nashville.

In addition to Ansari and Yu, the show’s cast is rounded out by regulars like Eric Wareheim as Arnold, a big goofy white dude friend, and Lena Waithe as Denise, a queer Black woman who seemingly has more game than all the guys combined. Dev’s love life threads its way through the ten-episode first season, and some fans have noticed that white women make up the majority of his romantic interests, including Rachel (Noel Wells), who is the woman he falls for the most. Dev does go out to dinner with an Asian woman (Annie Chang) he met on a dating website who is obviously only in it for the free meal and appears onscreen for less than a minute—I timed it. But the thing about a show like this is that we can’t expect Ansari and Yang to create a world that is everything to everyone. The lack of love interests who are women of color is only especially jarring considering that the rest of the casting is so diverse. Do we often ask why Mindy Kaling’s Dr. Lahiri on The Mindy Project is so into white guys on a show full of white people?

It’s difficult to fault a show run by two men of color that ostensibly has a “feminism” episode (it's called “Ladies and Gentlemen” and was written and directed by women). On this episode, Dev and Arnold learn about a few of the ways that women may feel unsafe in public spaces and how they deal with daily microaggresions and misogyny. Sure, it felt a little cheesy like, “Did you know that creepy guys follow women around, are unaware of their relative privilege, and can’t help but tell women to smile more when there’s nothing to smile about?” It’s a bit on-the-nose, but it's a noteworthy episode that perfectly closes with X-Ray Spex’s “Oh Bondage! Up Yours!” (Master of None’s soundtrack doesn’t mess around. Reigning Sound! The Zombies! There are so many bands that I want to list with exclamation marks!)

Still, I'm hoping that maybe a second season could include more women of color as main characters, in addition to Denise. Maybe it could explore what it means to be a daughter of immigrants? Or to have been raised by working class, non-English speaking refugees? Or even explain how Dev has such a beautiful sun-lit studio apartment to himself, owns really awesome jackets, and can afford to go out all the time on a struggling actor's paycheck? I have no expectations or demand that Master of None will answer these questions (except the thing about Dev's wardrobe, how does he store all his dope clothes in his small closet?). Stories about struggling artists in NYC are nothing new, with plenty of web series based off this premise, often created by people who are unable to find three-dimensional roles in an industry that continues to marginalize them. Perhaps the success of Master of None will clearly show that these narratives aren’t niche and can be relatable to a wider audience—all we need is a chance to tell our stories.