Dahlia and Amy talk about the beginning of the trial against Harvey Weinstein in New York. Weinstein was first exposed in 2017 in part due to the investigative reporting by Jodi Kantor and Megan Twohey at the New York Times. The story of that investigation is documented in their book, She Said, and reveals all of the work that went into their story.

Watchmen is a multivalent exploration of justice and corruption. Plus superheroes and great acting.

“Hit Reset” by The Julie Ruin

Read this Next: Backtalk: Happy New Year! The World Is On Fire! 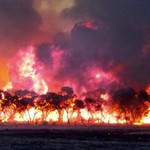 by Amy Lam
Dahlia and Amy ring in the new year (yay!) talking about how the world is burning down (boo!). The beginning of this decade can feel hopeless, but all hope is not lost: stay informed, organize, and create change.