This week, Dahlia and Amy discuss E. Jean Carroll’s cover story for New York magazine about all of the hideous men from her life. Through her piercing and frank prose, Carroll shares an account of sexual assault at the small hands of Trump. How will this latest accusation against Trump affect his presidency—if at all? In our latest “frivolous” argument, Amy and Dahlia want to know what you think of the 90’s comeback in fashion! Text “fashion” to 503-855-6485 to let us know!

Get your queues ready: Moonlight is on Netflix! Watch it again or for the first time but don’t miss this beautiful film, so full of longing, about the life of a young gay Black man as he grapples with his sexuality and identity.

The Third Hotel by Laura van den Berg is a lively and summer-perfect tale of ghosts, Cuba, horror films, and marriage.

FKA Twigs’s song “Cellophane” is so sad and lovely. Check out the music video to see how strong she truly is.

Read this Next: Backtalk: The Devil Works Hard But Anti-Abortion Politicians Work Harder 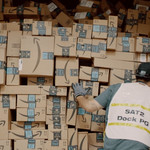 by Amy Lam
This week, Dahlia and Amy discuss the recent passage of the most severe abortion ban in Alabama and what this could mean for "Roe v. Wade" and abortion access across the country.