This week, Dahlia and Amy talk about the live-action casting for Disney’s The Little Mermaid. Halle Bailey was announced as Ariel in the upcoming film and many racists cried it would be inaccurate to have a Black mermaid in this classic story. Why is it so important for viewers to see a young Black woman be cast as a Disney princess?

The perfect summer flick is out: college students on vacay, sun-bleached days, sex, and pagan rituals! Midsommar (directed by Hereditary’s Ari Aster) is a bright, floral horror film exploring grief, community, and that boyfriend you need to dump.

For a preview of Ariel’s singing voice, listen to “Wolf at Your Door” by Chloe X Halle.

Download an MP3 of this podcast on Soundcloud or just browse our podcast archives here on Bitch Media.
[FULL TRANSCRIPT]
DAHLIA: Our shows are produced by Bitch Media, a nonprofit, independent, feminist media organization that is entirely funded by our community. If you love waking up to new episodes of Backtalk and Popaganda, join hundreds of fellow listeners as a member of The Rage. As a member, your monthly donation includes a subscription to Bitch magazine in print and digital, a special rage-inspired mug you’ll never wanna put down, exclusive access to a members’ only texting group, and loads of other snazzy benefits. So, don’t wait. Become a member today at BitchMedia.org/rage.

♪  “Light and tears along a path (‘Long a path)/
A knife between her teeth, she roams….” ♪
DAHLIA: Thanks for listening to Backtalk. This show is produced by Cher Vincent. Bitch Media is a reader- and listener-supported feminist nonprofit. If you wanna support the show and our work, please head over to bitchmedia.org and donate.

Read this Next: Backtalk: The Hideous Man Who Became President 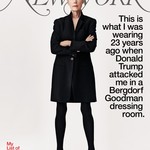 by Amy Lam
This week, Dahlia and Amy discuss E. Jean Carroll’s cover story for “New York” magazine about all of the hideous men from her life.