This week, Dahlia and Amy reflect on the past years of pop culture, feminism, and rageful conversations. Backtalk couldn’t have happened without its listeners and all of the thoughtful feedback that have sparked convos in each episode. We’ve giggled, we’ve cried, and we’ve learned so much along the way. Thanks so much for all of the support.

Always and forever, your rage cheerleaders!

This episode of Backtalk is sponsored by Lewis & Clark College’s 39th annual Gender Studies Symposium in Portland, Oregon, from March 11–13. Don’t miss out on this exciting series of free lectures, workshops, and panel discussions, an art exhibit, and keynote talks by Jack Halberstam and Feminista Jones. We’ll see you on campus!

You can break away from the cult of perfection by subscribing and listening to the award-winning Brave, Not Perfect Podcast. It’s hosted by Reshma Saujani. She’s the founder and CEO of Girls Who Code and author of the international bestseller Brave, Not Perfect. Her TED Talk about teaching girls bravery instead of perfection has over 5 million views. Join Reshma as she shares her secrets about bravery and success because she wants to help you fear less, fail more, and live bolder. She’ll even answer your questions and give you tips about how to get a little braver every day. Plus, she has revealing conversations with other changemakers about their complex journeys—and what we can take from them to improve our own lives. You can tune in and subscribe to Brave, Not Perfect wherever you listen to podcasts.

“Wait a Minute!” by Willow

Read this Next: Backtalk: VictimblamingToo 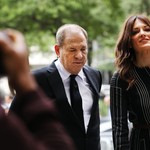 by Amy Lam
This week, Dahlia and Amy discuss comments made by Harvey Weinstein’s lawyer, Donna Rotunno, insisting that women could avoid sexual assault by not placing themselves in risky situations.