Backtalk: So Many Feelings & Escapist TV

This week Dahlia and Amy talk about feelings, all of them. They’ve got outrage fatigue with all of the bad news we’re inundated with regularly. They look at a couple of news items, on a global and local level, and talk about what they’re able to control when everything feels out of control. From the “mother of all bombs” being pushed out of a cargo plane to revoking Title X, they parse out what they can do. One of the ways they cope with the worse news is through television, and they talk about their favorite escapist television shows: Big Little Lies, The Leftovers, Schitt’s Creek, Chewing Gum, and One Day At A Time.

SAW: Another week, another recommendation for more fictional horror (how else will we cope?). Check out the zombies-of-the-un-undead in this coming-of-age cannibal drama, Raw.

READ: Dahlia commemorates the one-year anniversary of Prince’s passing by reading Touré’s I Would Die 4 U: Why Prince Became an Icon and “Prince’s Closest Friends Share Their Best Prince Stories.”

HEARD: Trishes calls her music “indie pop with hip-hop influence,” and it’s a perfect mix in the track “Animal.”

Relevant: Titus Andromedon Should Break Up With “Unbreakable Kimmy Schmidt” 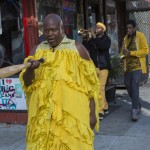 by Neesha Powell-Twagirumukiza
Titus deserves so much more than being the punchline of white women’s jokes.