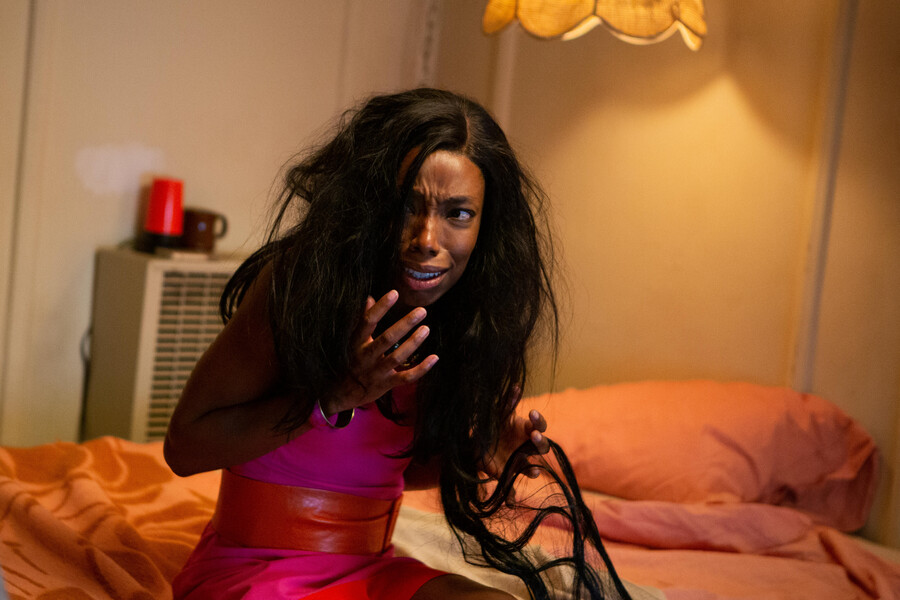 The biggest problem with stories about Black hair is that Black women are so rarely the ones who get to tell them. While the fibers that naturally grow from our heads have been the site of both control and liberation, Black men somehow always get the final say. First, there was Chris Rock’s 2009 documentary Good Hair—a farcical if sincere exploration of African American hair politics. And now there’s Justin Simien’s Bad Hair, a satirical horror comedy set in the ’80s that once again tells a story about Black women with little to no input from us. Simien, the man behind both the film and Netflix versions of Dear White People, brings together a litany of Black Hollywood’s biggest stars, old and new, including Vanessa Williams, Blair Underwood, and Kelly Rowland, but only manages to mock one of the struggles Black women have been navigating their entire lives.

In the film, Anna Bludso (Elle Lorraine) is trying to move up the corporate ladder after a retooling at her company—a failing, urban MTV copycat—lands her with a new boss Zora (Vanessa Williams) and a new opportunity to prove her worth. When Zora suggests that she won’t make it much further with her natural hair—specifically maintained because of an early traumatic relaxer—Anna opts for a silky new weave, installed by none other than Virgie (Laverne Cox), a stylist to the stars. After getting the weave, Anna begins making professional gains, but of course there’s a catch. Her new hair has a life of its own—and it has to feed on blood in order to maintain its pristine, polished look. The film itself is ambitious and largely fun. Leaning heavily on camp horror tropes, Simien creates a moody, tense atmosphere that builds anticipation.

The scene in which Anna has her weave installed is legitimately uncomfortable to watch, and it’s well countered by the hilariously acidic barbs Zora directs at her staff of largely Black women as they protest the coming corporate changes. But the film’s overreliance on its fictional lore leaves much to be desired. Bad Hair originally debuted in January 2020 at the Sundance Film Festival, and that version included a frustrating postscript that revealed Anna’s weave had been sourced from a former plantation operated by Black witches who were using the weaves as a means to take over the bodies of the unsuspecting women who wore them. The film’s conclusion seemed to be that Black women were to blame for their vanity and any harm that came to them because of their political and philosophical choices around hair. The final scene showed Anna and a few of her Black female coworkers with fresh box braids, newly possessed by the unseen witches. The message was irritatingly clear—the only “moral” choice was to wear your natural hair.

Hulu’s version of the film wisely excises this tasteless portion, but the result is a toothless satire that never builds to a convincing point. In his quest to create a fable about Black women’s hair, Simien overlooks the actual function it plays in Black women’s lives, opting instead for a superficial finger wag about the value and importance of natural beauty. A central focus of the film is a story about an enslaved woman who—admiring the flowing tresses of the lady of the house—fashions a wig for herself out of the moss from a tree. As the movie progresses, the moss-haired girl’s fate begins to align with Anna’s. The unintended message is that these hair-related horrors befall Anna (and by extension all Black women) because she desires proximity to whiteness. What’s frustrating is that the film begins on a strong foot: Anna is withering away in her assistant position and aching for new opportunities to show her worth at work. She has witnessed her casual, noncommittal boyfriend Julius (Jay Pharaoh) surpass her in the company’s hierarchy based on an idea she didn’t get credit for. Time and again she’s overlooked and told to wait her turn at work, though she’s barely able to afford her rent.

The biggest problem with stories about Black hair is that Black women are so rarely the ones who get to tell them.

At the same time, she has to justify her passion for the entertainment business to her family who consider her chosen career a waste of her skills. When Zora tells Anna that the only thing standing between her and her goals is a different hairstyle, it’s very apparent to the audience that the gorgeous weave she can’t afford is the best choice for her career, even though it directly contradicts her preferences. Navigating respectability is nothing new for Black women, many of whom have to choose to conform in order to succeed. But Bad Hair slowly descends into frothy nonsense, lacking any of the substance needed to sustain a successful satire. It isn’t just that Anna’s new weave brings her the usual problems like a tender scalp and increased upkeep. It’s a killer weave that murders her lecherous landlord when he tries to assault her and then drinks his blood. When Anna gets wise to her hair’s motivations and tries to starve it out (resulting in a messy, tangled nest atop her head), her weave sets its sights on her menstrual blood instead.

In a deeply unnecessary scene, the weave plunges into Anna’s underwear, gorging on the remains of her uterine lining in order to restore itself to its original sheen. If there was a message to be found there about the unfair pressures Black women face surrounding their hair, it escaped me. It is interesting to watch Anna navigate new office politics as her company takes the music channel in a more mainstream direction. She helps Zora convince one of the channel’s VJs, Sista Soul (Yaani King Mondschein), to get her own weave and tone down her Afrocentric aesthetic in order to fit in with the network’s new look. But as her work opportunities grow, her private life falls apart. The weave takes over her life as the witch it belongs to grows in power. Simien should be commended for what seems to be a sincere effort to explore a very real issue that Black women face, but he lost the plot when he turned the film into a mockery of itself. It’s hard to believe that a Black woman director wouldn’t have made more of an effort to ensure the film’s Black female characters were never the butt of the joke. While it was a good idea to excise the film’s original ending, without new material to cohere the story, all we’re left with is an unfulfilled mission statement that inadvertently makes a mockery of an all too real issue for Black women.

Read this Next: The Souls (and Hair) of Black Girls