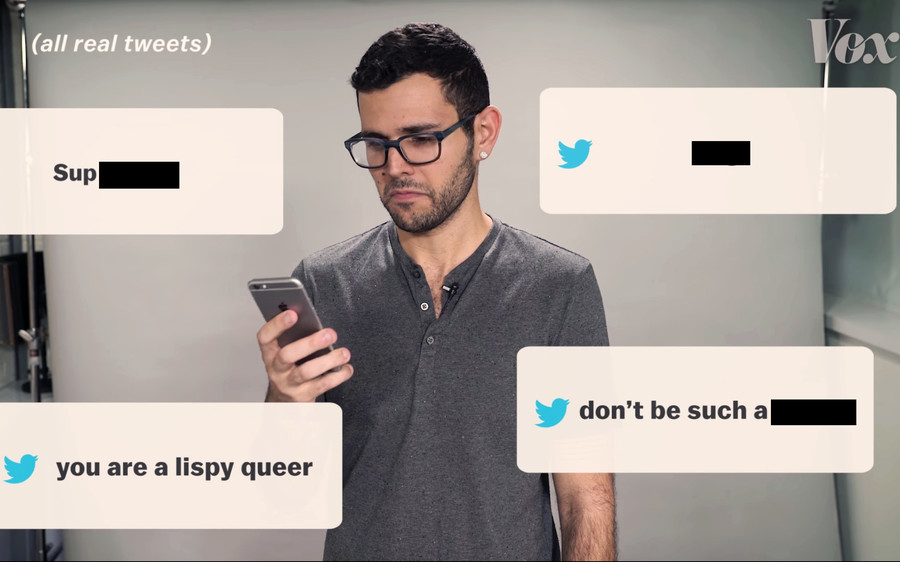 Last month, Carlos Maza, host of the Vox video series Strikethrough, spoke out against the ongoing harassment he receives on YouTube. In a series of tweets, Maza condemned the video-sharing platform for failing to enforce its anti-harassment policy against Steven Crowder, a conservative YouTuber who has routinely targeted him because of his sexual orientation and race. “Every time [one of Crowder’s videos] gets posted, I wake up to a wall of homophobic/racist abuse on Instagram and Twitter,” Maza tweeted.

For the past two years, Crowder has repeatedly harassed Maza on his show, Louder with Crowder, referring to him as “Mr. Lispy Queer,” an “anchor baby,” describing him using the t-slur, and deriding him because he “likes dicks.” The “alt-lite” YouTuber has garnered over four million subscribers on his channel, which features gems such as “‘Rape Culture’ Is A MYTH,” “There Are Only Two Genders,” and “5 Reasons to Build the Wall!” Just last year, Maza was doxxed by Crowder’s fans and received waves of threatening text messages. He has tweeted about the toll that the constant online and offline abuse has taken on his mental health. “It makes life sort of miserable. I waste a lot of time blocking abusive Crowder fanboys, and this shit derails your mental health.”

While YouTube initially claimed that Crowder’s videos didn’t violate the site’s rules, their harassment and bullying policies specifically state otherwise. According to YouTube’s guidelines, content and behavior “intended to maliciously harass, threaten, or bully others” is not allowed on the platform. Despite this, Crowder’s videos targeting Maza remain on the site. To make matters worse, YouTube defended its decision in a blog post, saying, “If we were to take all potentially offensive content down, we’d be losing valuable speech—speech that allows people everywhere to raise their voices, tell their stories, question those in power, and participate in the critical cultural and political conversations of our day.” Apparently using homophobic and racist slurs against queer men of color now constitutes “valuable speech.” Got it!

YouTube then had the audacity to release an “apology” to the LGBTQ community during Pride Month. After receiving notable pushback from other LGBTQ creators, CEO Susan Wojcicki spoke about YouTube’s decision at the Code Conference in Scottsdale, Arizona, saying, “I know that the decisions we made was very hurtful to the LGBTQ community and that wasn’t our intention at all.” While YouTube proudly displayed a rainbow logo as a symbolic performance of allyship, they still doubled down on their decision to let Crowder remain on the platform, but have demonetized his videos until he complies with their policies.

This might seem like a reasonable first step, but LGBTQ-friendly videos are already routinely demonetized on YouTube. In general, most YouTube videos that discuss politics, social justice, or sexuality are systematically flagged by the site’s algorithm and made ineligible for ad revenue. Videos that are both pro- and anti-LGBTQ are treated the same way by YouTube’s flagging system. Additionally, most content creators rely on alternative forms of revenue, such as brand sponsorships, merchandise, and fan-funded sites like Patreon, for the bulk of their income. Steven Crowder has since bragged that his channel was already largely demonetized to begin with, making YouTube’s decision less effective than a slap on the wrist.

As Maza pointed out on Twitter, half measures like removing ads on videos also emboldens bigots to play the victim. Not only have Crowder’s fans started going after Maza with even more vigor for his attempts to “censor” them, now Blaze TV, a conservative streaming app that broadcasts Crowder’s show, is using YouTube’s demonetization to market their monthly subscription service. As long as social media sites like YouTube refuse to hold bigots accountable, creators facing harassment will have to make the choice between suffering in silence or speaking out and making the harassment worse.

As long as social media sites like YouTube refuse to hold bigots accountable, creators facing harassment will have to make the choice between suffering in silence or speaking out and making the harassment worse.

YouTube’s failure to protect marginalized creators from harassment is nothing new; historically, the company hasn’t publicly responded to targeted abuse on the site. Marginalized YouTubers, myself included, have been speaking out about the harassment they’ve experienced from other users for years to no avail. Writer, comedian, and YouTuber Franchesca Ramsey, who has been particularly vocal about this issue, called out the platform for not taking accountability for the harassment festering on the site. “One of my harassers made 40 videos about me over the course of three years with my full name in the title,” Ramsey tweeted. “[And] one in which he detailed wanting to ‘hate fuck’ me, which sounds a lot like rape, no? I contacted YouTube multiple times, and no action was taken.”

For marginalized content creators using the platform, the ongoing harassment is both disheartening and traumatizing. A search of my username on YouTube still yields results from alt-right, anti-feminist, and anti-LGBTQ channels with video titles like “Feminist needs to shut up,” “YOUTUBE FEMINIST TRIGGERED BY TRUMP!” and “Watch marinashutup pussywhip her boyfriend.” On their own, video responses like these aren’t particularly meaningful or substantive. Misogynistic, ignorant, and cringe-inducing, yes, but they’re easy enough to ignore. The problem, however, arises with the sheer volume of harassment the fans of these creators generate. One video response from a far-right channel with 100,000 subscribers can lead to thousands of their fans bombarding your social-media accounts for weeks on end.

While Crowder is solely responsible for targeting Maza, this particular incident is not isolated. “This is not just one individual harassing me,” Maza told NowThis News. “This is a systematic YouTube-wide problem and it’s not by accident. It is the product of YouTube’s choices and the way that it chooses to not enforce its anti-harassment policy.” YouTube doesn’t want to admit that it profits from the far-right cesspool of harassment on its site, but many attack videos garner significantly more views than the originals. As of this month, YouTube is still making money off of Blaze TV’s ads running on their site and Crowder is still able to promote his homophobic merchandise, containing slogans like “Socialism Is for Fags,” directly on YouTube.

Harassers who target LGBTQ people, women, and people of color on YouTube are still seeing their influence, subscriber counts, and income grow. YouTube may be able to slap a rainbow over their logo and release a Pride video once a year, but it ultimately means nothing if they don’t actually do anything to protect LGBTQ creators on their site. If creators repeatedly using homophobic and racist slurs to target queer people of color doesn’t violate your site’s harassment policies, then you need to fucking reevaluate them.

Read this Next: Reclaiming Hysteria 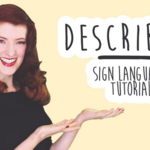 by Kate Averett
Demonetization and algorithm bias can dramatically affect the income that disabled creators stand to make.