In Mocking “Defund the Police,” Obama Warps His Own Legacy | Bitch Media

Legacy LostBarack Obama Has Shown His True Colors in 2020 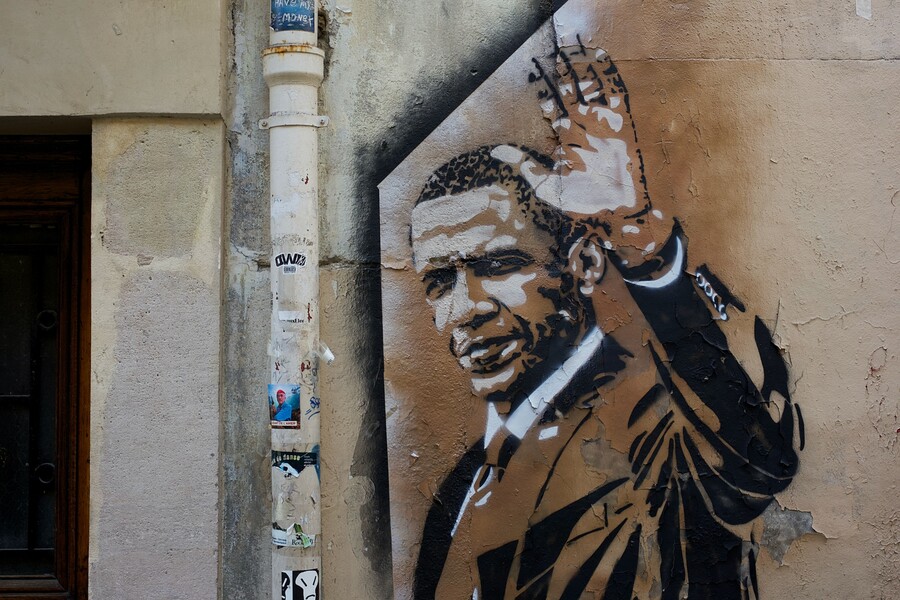 On December 3, former president Barack Obama spoke out publicly against cries to defund the police. “If you believe, as I do, that we should be able to reform the criminal justice system so that it’s not biased and treats everybody fairly, I guess you can use a snappy slogan, like ‘defund the police,’” he said in an interview on Snapchat’s Good Luck America. “But, you know, you lost a big audience the minute you say it, which makes it a lot less likely that you’re actually going to get the changes you want done.” His remarks outraged organizers, activists, and abolitionists for a number of reasons: “Defund the police” is not a “snappy slogan;” it’s a radical and actionable demand that millions of people across the globe have been organizing toward for decades. Further, though Obama has assumed that everyone wants to “reform the criminal justice system” as he does, this is not the case: Many abolitionist organizers, including Angela Davis, Mariame Kaba (who has contributed to Bitch), Reina Sultan (who has contributed to Bitch), and Toyin are committed to completely abolishing the prison-industrial complex, and have spent years researching and explaining the meaning behind and real-life applications of the “defund the police” demand.

Obama’s Good Luck America interview is but one example of the former president angering progressives as of late. In a recent interview with Stephen Colbert, Obama defended the many drone strikes he ordered during his presidency, which killed unintended civilians nine out of 10 times according to data from The Intercept. “The problem with the drone program was not that it caused an inordinate amount of civilian casualties,” he said. “The drones probably had less collateral damage.” The president also published the first volume of his memoir, A Promised Land, on November 17, which similarly caused controversy among leftists. In one passage, he noted that he couldn’t afford to look soft on terrorism as a “liberal president,” but that he “took no joy” in ordering people killed. In another section, he wrote that police officers were justified in arresting prominent African American historian Henry Louis Gates for attempting to enter his own home in 2009: “I could easily picture [Gates] cussing out a cop to the point where even a relatively restrained officer might feel his testosterone kick in.”

For some Americans, these recent remarks about race and policing feel surprising, as they might expect Obama, a former Chicago organizer who built his political platform around the language of hope and racial unity, to be more sensitive and attentive to the demands of Black organizers. But Obama’s thoughts on police reform are not new. In fact, the politician has long defended the reputation of the U.S. police and military over fighting for the rights of Black Americans. In 2016, Obama told Colin Kapernick and other NFL players who took a knee during the national anthem that they should think about the pain they might cause military families. In 2014, during the height of the Black Lives Matter uprisings in Ferguson, Missouri, he released a statement urging folks not to riot over the grand jury’s decision to not charge officer Darren Wilson for murdering Michael Brown, writing that “nobody needs good policing more than communities with high crime rates” and that justice will not be achieved by “throwing bottles,” “smashing car windows,” or “using this as an excuse to vandalize property.” Despite his public image as a chill, equality-seeking pacifist, these actions concretely illustrate that both during his presidency and today, Obama is a staunch reformist desperately clinging to the social and political status quo

Though Obama’s political ideology has not changed over the last decade, recent anger over the politician’s views illustrates that public opinion of him certainly has. This is because as issues of policing and prison abolition in America come to the forefront of our cultural conversation, people are much less forgiving of politicians who continue to support the police and other racially violent systems, even if they are Black. Public outrage over Obama’s dismissal of the phrase “defund the police” is a key example of how public opinion toward the former president has shifted. In 2008, Obama rose to the top of the Democratic ticket with his still-famous slogan, “Yes, we can.” At the time, the phrase galvanized Democratic supporters who hoped admitting a Black man to the White House would be a victory in the fight for racial equality in the United States. Though of course electing the first Black president in America was a historically and symbolically significant event, Obama’s lack of effective anti-racist policy during his tenure in office showcases how often, racial representation in politics can often only go so far.

For this reason, though “yes, we can” was a rallying cry in 2008, it has lost its flavor in 2020, with many Americans wondering what exactly Obama “can” or will do to advance the rights of Black people in America. Our collective disillusionment with empty, easily palatable catchphrases further explains the current popularity of demands such as “defund the police,” which serve as not only a slogan for the left, but an actionable step toward a safer world for Black people (one that has already proven effective). It is unsurprising that Obama is ignorant of this work—or actively sidestepping it—since he spent the majority of his time in office either ignoring or openly thwarting progressive anti-racist demands by making light of calls to address environmental racism in Flint, Michigan, and enacting laws to track down people who threaten police officers. Obama continues to act in the best interests of the establishment in 2020: He stayed out of the public eye for the majority of 2020—though he did appear at a summit after George Floyd’s murder to talk with organizers and activists, and told NBA players to protest differently than a labor strike—and ultimately stepped into the spotlight to quash progressive demands by arguing for police reform and endorsing centrist Democrat Joe Biden for president over the Democratic Socialist candidate Bernie Sanders.

“Defund the police” is not a “snappy slogan;” it’s a radical and actionable demand that millions of people across the globe have been organizing toward for decades.

For reformists like Obama, stagnation and empty catchphrases are a political sweet spot: Phrases like “defund the police” make him uncomfortable because they’re actually demanding action. Obama’s recent disparagement of the Black Lives Matter movement has served as a rude awakening for many Americans who were hoping that electing Biden into the presidential office will return the country to a sense of normalcy after four years of Donald Trump. This was, in fact, an idea that Biden himself campaigned on throughout 2020, and upon winning the election in November, he announced, “America is back” to his national security team. This statement has caused many to wonder: back to what? The tumultuous events of 2020, such as the pandemic, economic recession, and Black Lives Matter uprisings following the death of George Floyd, have caused many to confront the ugly reality that “normal” life in America unquestionably necessitated several forms of systemic racism such as immeasurable police violence and the disproportionate incarceration of Black folks in U.S. prisons.

This collective reckoning of racism’s role in the fabric of the United States helps explain the changing public perception toward Obama’s legacy: When Trump won the presidential election in 2016, much of America was heartbroken that Obama was leaving office. On the contrary, 2020 has brought about a much more public and fraught debate about the role that any U.S. president, regardless of race, has in enacting racism and violence on both a national and global scale. In this way, Obama’s shameless mockery of radical Black abolitionist demands has forced many Americans to stop sentimentalizing the “old America” that figures like Obama and Biden represent, and instead commit to building a new world that prioritizes community safety and racial equality. Obama’s rejection of calls to defund the police is disappointing, and stands as yet another example of a prominent Black politician who refuses to listen to the demands of their constituents. But while it hurts that Black politicians often do not have the needs or best interests of everyday Black people at heart, it’s illustrative of a frank reality: Obama was never going to be the leader we needed. As we look ahead, it’s imperative that we follow the lead of radical Black abolitionist organizers who are fighting every day to defund the police, abolish prisons, and make America a safer place for Black folks to live.

Read this Next: Beyond Moral Purity 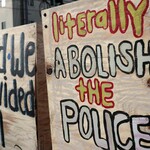 by Reina Sultan
They aren’t “doing nothing” to stop Trump—rather, they’re working to better our communities through other means.