Be a Man | Bitch Media

Be a ManThe Disruption of Toxic Masculinity in “Master of None” 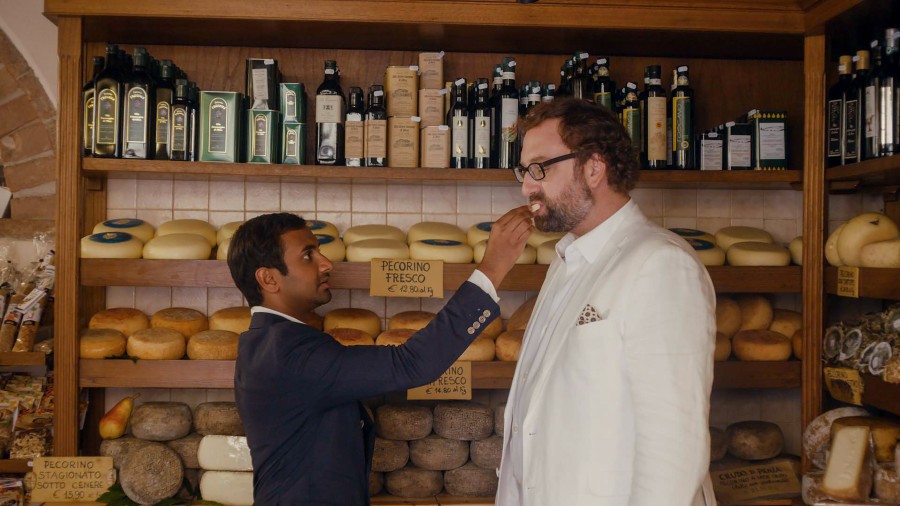 Spoilers below for season two of Master of None

Aziz Ansari’s Master of None is back for a second season and holding space for new articulations of masculinity. Main character Dev Shah (Aziz Ansari) explores the world with a refreshing race- and gender-conscious lens that pushes for healthier relationships for men. While Master of None has some manic pixie dream girl tendencies, the show’s strength lies in how men’s friendships and emotions are displayed. The show models what healthy platonic relationships should look like for men: Dev offers reassurance and support to his friends, doesn’t shy away from discussing feelings and emotions, and consistently checks in when they seem upset or distressed. He doesn’t rely on the assumption that his friends know he is there for them. Instead, he actively reaches out to them.

The central example of this is Dev’s relationship with his best friend Arnold (Eric Wareheim). Their relationship is silly: They travel around Italy singing about food and call each other “cutie.” When Arnold seems upset after getting their car stuck in a small passage in Italy, Dev asks if he needs some time to cool off or if he needs to talk, and Arnold reveals that he’s hurting because his ex-girlfriend is getting married. Dev offers to be his emotional support and is vigilant about consoling Arnold throughout the episode. Dev turns to Arnold for advice on how to navigate his romantic life, too, and Arnold responds with encouragement and guidance. Both men know they can talk about feelings and relationships because it’s necessary for their mental well-being. Arnold and Dev’s friendship goes beyond current representations of male friendships by actively including emotional availability and the discussion of feelings. It doesn’t rely on misogynistic discussions of sexual conquests. Conversations about feelings and emotions aren’t fleeting or represented by the ironic male exchanges of emotionality in most bromance narratives. Arnold and Dev’s relationship actually thrives on both men’s ability to be vulnerable.

One of the most touching episodes delves into Dev’s relationship with his best-friend-since-childhood Denise (Lena Waithe), a Black lesbian woman. The progression of their relationship and Denise’s sexuality is told through snapshots of Thanksgiving dinners through the years, starting with the first dinner attended by Dev as a child. This episode is remarkable for two reasons: It gives space to the complexities and intersections of a Black queer woman growing into her own skin and depicts a healthy platonic relationship between a man and a woman. Like he does with Arnold, Dev holds space for Denise. He checks in with her and respects her boundaries when she wants to be called “Lebanese” instead of “lesbian.” These might seem like little things, but the imbalance of emotional-labor performance between genders is well-documented. Dev’s role as a friend explores the possibility of men being emotionally supportive of their platonic female friends.

Dev goes out of his way to support his friends. He senses when they might be upset and confronts these situations, rather than avoiding their emotions. He doesn’t hide his own feelings either. In an extremely relatable scene, Dev tells Arnold that he’s heartbroken about ending his relationship with his love interest, Francesca. “I don’t even think this is about her,” Dev tells him. “I just miss that connection so much. And now I just feel so fucking alone.” Dev exposes how he feels about the absence of romantic love to Arnold because they trust each other with their vulnerabilities. Their conversations about emotions are cornerstones of the show and their friendship. By far, the most interesting aspect of Master of None is how it displays emotional processing and pain rather than cutting it out. When Arnold is about to attend his ex-girlfriend’s wedding, he browses old photos of them on his phone, sighs heavily, and then mutters “fuck.” He is in visible emotional pain and later misbehaves at the wedding. This earlier scene makes his misbehavior more human because it’s a torturing practice we have all indulged in.

Dev makes a show of healthy emotional processing as well. When he realizes he has feelings for Francesca, Dev holds back tears in the back of an Uber because she is engaged to another man and leaving New York. The silent scene lasts about three minutes, just showing Dev and his emotional response to love and rejection. When he is feeling heartbroken about Francesca again, Dev drinks and makes a pros-and-cons list. Toxic masculinity teaches men not to overthink or feel, but Dev is able to cope with his emotions. Men are not supposed to flinch in the face of adversity; Ansari is daring to flinch.

Dev’s conversations with his family are similarly constructed around emotions and honesty. In the second season, Dev explores his feelings toward Islam as a child of immigrants who has been Westernized. The push and pull of his reality is told through his decision to eat pork, and it all comes to a head during a conversation between Dev and his father. His father speaks to him about the difficulty of wanting Dev to connect to his culture while knowing his son will never experience it the way that he did. It’s a tough topic for both men, but seeing them push through their emotions to gain better understanding of each other is valuable. This touching conversation between Dev and his father is part of a larger trend in the show: social issues are openly discussed by diverse voices.

Master of None confronts difficult issues head on, without being afraid of alienating its audience. The “Thanksgiving” episode gives glimpses of Denise’s family and Dev discussing police brutality in minority communities. When asked what a minority is by Dev, Denise’s mother responds: “It’s a group of people who have to work twice as hard in life to get half as far, and Denise, you a Black woman, you gonna have to work three times as hard.”

However, the show is certainly not flawless. Master of None struggles to construct female characters. For instance, Francesca is a textbook manic pixie dream girl: She is quirky enough to be cute, but is only inserted in the story to create a love triangle with Dev and her fiancé Pino. With the exception of Denise and her female relatives, women characters don’t possess the complexity afforded to male characters. Waithe and Ansari cowrote the “Thanksgiving” episode, which might explain the depth of Denise’s character.

In the episode “First Dates,” Dev dates a string of women to illustrate the assembly line of online dating, and therefore hardly gives depth to any of the women he’s going out with. Ansari attempted to tackle the issue of sexual harassment in the entertainment industry with the narrative of Chef Jeff, a big-shot culinary television actor, but ultimately fails. While Dev believes the victims when they come forward, the nuances of standing up to a famous offender are overshadowed by Dev’s love life. Just after Jeff’s victims come forward and Dev’s show with him is cancelled, he tells Francesca that he doesn’t care about the show because she is with him. This is where the subject dies. There’s also no discussion of how hard it is for a man of color in the entertainment industry to publicly disavow a white man who is his boss. It’s a missed opportunity to delve into men being complicit in the system of rape culture.

Master of None’s strength lies in how masculinity is articulated by Dev and his friends. Netflix gave him leeway to tell those stories, which has resulted in an incredible example of what masculinity can look like if we let men be softer.