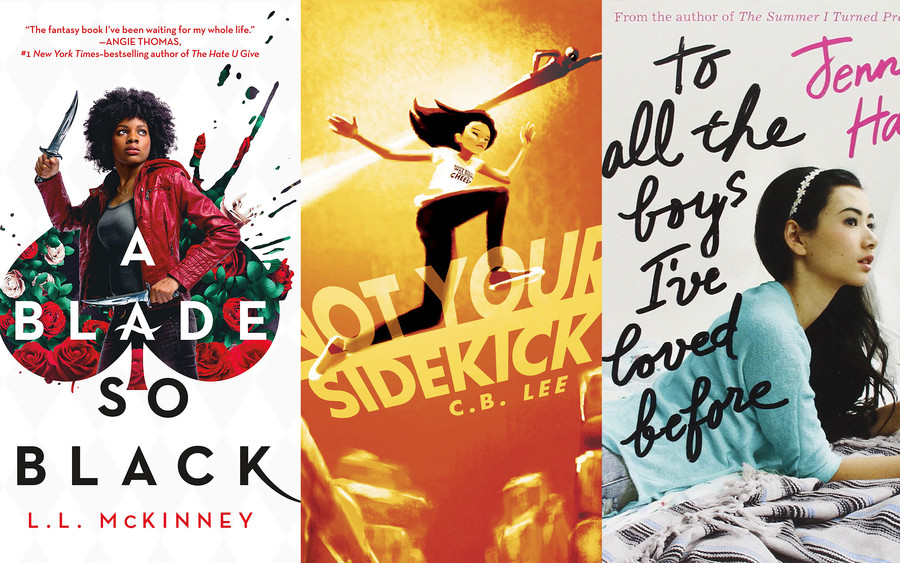 A Blade So Black by L.L. McKinney, left, Not Your Sidekick by C.B. Lee, and To All the Boys I've Loved Before by Jenny Han (Photo credit: Imprint, Duet Books, and Simon & Schuster Books for Young Readers)

Inside your favorite independent bookstore is a section devoted entirely to young adult literature. You might recognize some of the titles at a glance: Nic Stone’s 2017 novel Dear Martin and Angie Thomas’s 2017 novel The Hate U Give, which explicitly discuss social justice and racial discrimination; or Emily M. Danforth’s 2012 book The Miseducation of Cameron Post or Mark Oshiro’s 2018 novel Anger Is a Gift, which explore the harsh realities of life as a queer teenager. These books offer necessary and safe explorations of hard topics, but tucked within the shelves are other, lighter stories. They’re romantic comedies, space operas, and  fantasy adventures that  offer a breather from the real world while reaffirming teenagers of their place within it. These stories are escapist fiction—literature that doesn’t explicitly focus on the social and political issues in our real world, allowing the reader to temporarily forget about them and fall into the story. Some might see such stories as trivial, but in 2020—between the trauma of Latinx kids being caged at the border, the repeated push to eradicate queer rights, the abuse of Black children at the hands of the police, and a planet that’s literally on fire—they’re a needed and necessary part of growing up for today’s kids.

In our current hellscape, young readers can find cathartic release in escapist fiction, be it fantastical or realistic, that allows marginalized teenagers, in particular, a chance to be front and center. Queer people, disabled people, people of color, and folks at all the intersections get a chance to be a hero, an antihero, or the center of a love triangle, for reasons outside of their political and social identities.

By now, you might know the phrase “compassion fatigue.” The original science focused on the secondary trauma that caregivers, like nurses or emergency technicians, would experience when helping people in distress. On a broader level, though, compassion fatigue is “caring too much and the pain that comes from it,” says Larissa Krause, an associate clinical social worker who specializes in trauma and neurofeedback. The idea is one that’s entered our popular consciousness. On  Netflix’s weekly Patriot Act, series, Hasan Minhaj described the compassion fatigue felt by most people as having “50 tabs open in our mental browsers.” Minhaj encouraged viewers to give themselves a break for the sake of their sanity: “I’m not saying, ‘Shut down your browser.’ Just close a couple tabs.” But for teens, compassion fatigue manifests much differently.

“[Teenagers] go through this incredible growth neurologically. It’s like all these highways are launching out,” says Krause. As teenagers begin forming new neurological pathways, “we start to look at our peers. The people we surround ourselves with become these role models for us.” The intensity of these new neurological pathways is affected by adverse childhood experiences (ACEs); that term may sound “scary” because it encompasses a multitude of traumas such as having an incarcerated parent or experiencing  physical abuse, but nobody is immune from ACEs. Even the most well-adjusted among us will score at least a two on an ACEs quiz.

New neurological pathways combined with ACEs lead to a strain on a teenager’s mental health—and that’s before stressors like political upheaval, social media, and the 24-hour news cycle are introduced. Add those, and it breaks our window of tolerance or our ability to think and feel without slipping into fight-or-flight mode. “Now, more than ever, we have access to information that is so overwhelming,” says Krause. Though valuable in forming social connections, going on social media “is like sending a kid into a candy store with no direction. You’re gonna make yourself sick.” In order to keep neurological pathways healthy, teenagers have to step back from constant political and social engagement.

“Our brain is going to crave explanation for whatever we’re witnessing, so we tell ourselves a story. [But] our brain needs a break. It needs to make sense of something. It needs to engage in curiosity and creativity.” Or, in other words: our brains need books. East City Bookshop in Washington, D.C., serves the greater Capitol Hill community, and as with many independent bookstores across the country, the books inside offer both sharp critiques of the current administration and reprieves from the never-ending conversations. For Cecilia Cackley, the children’s book buyer and event coordinator, that means embracing one of the store’s core values: no book shaming. There’s nothing wrong with rom-coms or fantasy adventures if that’s what a reader needs to decompress. It’s something that many young adult writers already understand. “What’s revolutionary is that escapist fiction can be a ballast in times of economic or political turmoil, especially for women and marginalized people,” says Sandhya Menon, author of the 2017 novel When Dimple Met Rishi. Menon writes contemporary romantic comedies for teens much like the popular Jenny Han, whose bestselling To All the Boys I’ve Loved Before trilogy recently became a series of Netflix feature films. Contemporary escapist fiction allows readers, Menon says, to “reimagine the world we live in as benign, low stakes, and [a place where] happily-ever-after is achievable for everyone.”

It also prevents the stories of marginalized people from becoming a monolith. Menon is both “a woman of color and an immigrant,” but the stories she writes aren’t about the struggles of living as both in America. Those stories have a necessary place on bookshelves, but they can’t be the only stories that end up in readers’ hands. If escapist fiction gives readers a break from the current world, then the easiest way out is by going to another. That world could be Los Lagos, the fantastical world the Mortiz sisters navigate  in Zoraida Córdova’s Brooklyn Brujas series. It might be Andover, the near-future city full of superheroes found in C.B. Lee’s Not Your Sidekick (2016). It might be Wonderland as reimagined by L.L. McKinney in A Blade So Black (2018). Or it could be the many worlds and many planets captured  in Ashley Poston’s adventure-filled space opera Heart of Iron (2018).

Poston, who grew  up as a queer teen in the South, knew she didn’t want to read stories that reflected her real life. “I wanted to read the story about the girl who opens her window to see the head cheerleader on her front lawn with a stereo bopping Kesha as she asks her to the prom.” That desire eventually brought her to writing both romantic comedies and fantastical adventures that feature diverse characters. Heart of Iron and The Princess and the Fangirl, a contemporary reimagining of The Prince and the Pauper, made the American Library Association’s Rainbow List in 2019 and 2020, respectively, for having “significant gay, lesbian, bisexual, transgender, or queer/questioning content, aimed at children and youth from birth to age 18.”

Escapist fiction is literature that doesn’t explicitly focus on the social and political issues in our real world, allowing the reader to temporarily forget about them and fall into the story.

Similarly, Córdova decided to write the Brooklyn Brujas series, which kicked off with 2016’s Labyrinth Lost, because she was sick of “the same tired narratives: poverty, undocumented migrants, violence.” Though Córdova recognized the importance of Sandra Cisnero’s groundbreaking 1984 novel The House on Mango Street, she didn’t enjoy  reading it as a child because it didn’t reflect her upbringing. “I exclusively searched for fantasy when I was a teen and would go to the library on my own,” says Córdova. “I could see myself more in a vampire, even a white vampire, than I could [in] Jane Austen.” Now, Latinx kids don’t have to rely on vampires for a taste of magic: They can reach for Córdova’s books, including the forthcoming Incendiary, which takes place in a fantasy kingdom called Puerto Leones and offers a more serious alternative to the Brooklyn Brujas and their magical hijinks. “Latinx kids need magic and space and thrillers and mysteries,” says Córdova. “They need genre and romance. They need escapism to know that their stories are not a monolith.

Dahlia Adler, author of the 2019 book, His Hideous Heart: 13 of Edgar Allan Poe’s Most Unsettling Tales Reimagined and the forthcoming book, Cool for the Summer, receives dozens of book recommendation requests every day  on the LGBTQ Reads Tumblr, which is an extension of her queer-focused book website that’s designed to help readers, many of whom are teenagers, find books that center around LGBTQ characters. Lately, requests skew toward sapphic fantasy and gay trans romances, which are currently two of the biggest gaps within the industry, though Adler knows that will shift with a number of forthcoming titles. There’s also a high demand for books like Casey McQuiston’s bestselling 2019 novel Red, White & Royal Blue, which is arguably the epitome of romantic escapist fiction, since it tells the light, happy story of Alex and Henry as they fall in love; it’s no surprise that queer teens are clamoring for more. “It’s not easy to imagine hope and acceptance and love everywhere when that hasn’t always been your experience,” says Adler. But finding and reading stories that internalize love and acceptance is a key part of managing and overcoming compassion fatigue for teenagers.

“If we teach kids how to shift the way they’re thinking about things and how to learn about their own inner dialogues and to find their strengths—which fictional books do—it allows them to realize they have this amazing power,” says Krause. “Shifting your lens in the story that you tell [yourself] can help alleviate feeling trapped.” Cackley perhaps understands it best. “Seeing yourself in stories that aren’t all the same serious realistic narratives is powerful and [reminds] teens that there is no one way to tell their stories. When people in power traffic in stereotypes and erasure, these books fight back and help teens do the same.”

Read this Next: The Best Queer YA Novels of 2019 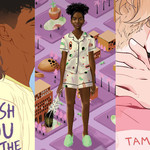