Beyoncé Wrapped Capitalism in Orange Boxes and Called It Empowerment 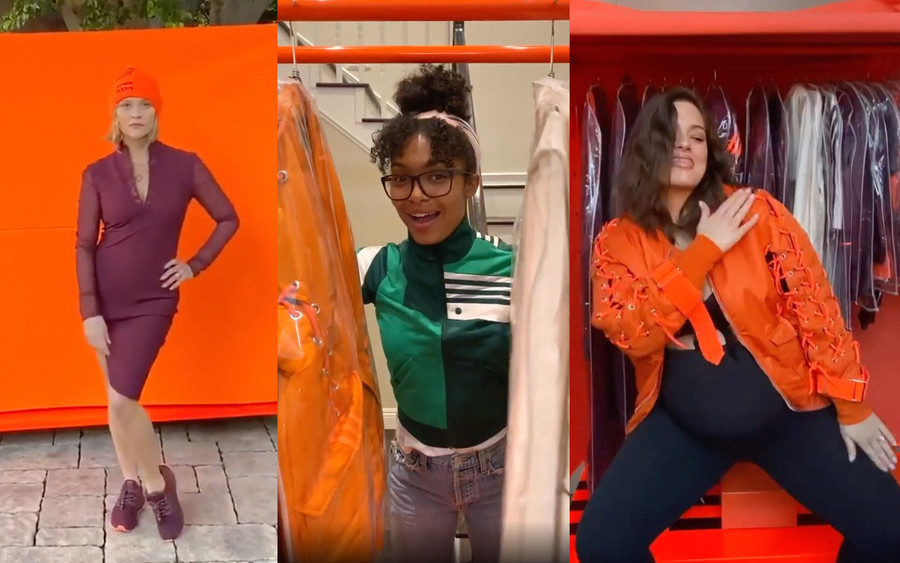 On January 18, Beyoncé dropped Ivy Park’s first collaboration with Adidas. Though the streetwear (a style with impossible-to-ignore roots in Black culture) almost immediately sold out, Beyoncé’s take on the trend—featuring an oxblood, white, and orange color scheme—didn’t exactly land as her team intended because of the race and class consciousness now prevalent among her fans and followers. A week before the capsule collection officially launched, gigantic orange boxes worth about $3,070 (before shipping) began arriving on the doorsteps of A-list millionaire celebs, such as Yara Shahidi, Zendaya, and Reese Witherspoon, who unofficially became Ivy Park ambassadors, flaunting a new free wardrobe in videos shared across Instagram and TikTok.

These celebrities modeled the line, smiling excitedly for the camera and thanking Beyoncé for her generosity, but no matter the intention, this strategy wasn’t moving or inspiring to witness. Why? Because athleisure is streetwear stripped of its racialized history and reinterpreted for the mainstream, and it’s hard to convince a race- and class-conscious fanbase to empty their pockets in the name of Black capitalist excellence. Ivy Park’s promotional strategy both seemed like a strange circular relationship where the wealthy help the also wealthy and like a move where the radicalized roots of streetwear were flattened and decontextualized. In the case of the former, there were tiers to Ivy Park’s marketing plan: the larger-than-life, rolling closet rack covered in an buttoned-up orange cloth was reserved for more famous celebs, while a smaller rolling orange and oxblood box was gifted to a second tier of semi-famous celebs, and a couple of influencers and entertainers were given a cardboard orange box.

In some ways, it’s a smart marketing technique to use the star power of Zendaya or Megan the Stallion to expose a line to their respective fan bases. There’s nothing new about celebrities receiving free merchandise; it’s a marketing tactic in a world where celebrities are brands. In the age of macro-influencers (who can double as celebs) and micro-influencers (who appeal to niche audiences), brands strategically reach out to people who will expose their products to potential consumers and, based on audience engagement, possibly make a return on their investment. Making money is always the end goal, but for a celebrity like Beyoncé who has made inclusivity central to her brand, this tiered marketing schema not only reinforced a hierarchy but highlighted our collective investment in celebrity.

Meanwhile, gifting Ivy Park to the likes of Witherspoon separated streetwear from its roots. At its essence, streetwear is the spirit of cool, survival, and self-expression. In 1989, Carl Jones launched Cross Colours after being inspired by teens on the subways of New York City. In her 2019 book, Dressed in Dreams: A Black Girl’s Love Letter to the Power of Fashion, historian Tanisha C. Ford writes that Cross Colours was a love letter to the hip hop generation, designed for “those of us who were making statements out of baggy jeans because we had to wear ill-fitting hand me downs.” Jones spun the shame of wearing hand me downs, effectively rebranding it. During the late’ 80s, the tracksuit also underwent a cultural reinscription: As the tracksuit moved beyond basketball courts and sports arenas, the purpose and the social implications of the garment changed.

It was no longer about utility; it was about style. “The tracksuit in fashion is the antistrophe to the workwear trend,” writes Joshua Stein in a 2017 article for the Daily Beast. “That was about participating in an albeit idealized labor system. The tracksuit is about checking out of the modern-day one.” The roots of streetwear are also entangled with the rise of Black celebrity-backed clothing brands. Hip hop fashion brands were born from rappers, including Beyoncé’s husband, Jay-Z, realizing that simply name-checking brands in songs increased the brand’s sales. Jay-Z pioneered streetwear brand Rocawear in 1999 after a deal with Iceberg, a popular European streetwear brand, fell through. As Jay-Z notes in his 2010 memoir, Decoded, he regularly sported Icewear in the ’90s, and thanks to his influence, hundreds of his fans began rocking the brand the well. Despite that, Iceberg rejected him when he attempted to broker a partnership with the brand.

“They offered us free clothes, but we wanted millions and the use of their private jet,” he writes in Decoded. “We walked out of their offices realizing we had to do it ourselves.” Fellow rappers like Diddy and 50 Cent followed suit, creating their own brands, wearing their own clothes in their music videos, and name-checking their brands in their songs. At the time, these acts felt powerful because Black people were finding ways to build their own wealth and pushing back against companies that didn’t recognize their value in the process. Ultimately, capitalizing off their influence was more profitable than flexing the designer clothes they were wearing. Turning influence into profit was a story of overcoming and survival, a story of Black entertainers realizing their worth in the zeitgeist and flipping it into liquid cash.

But the tide is shifting: Many people no longer consider wealth the gateway to freedom and power for Black people. As Jasmine Burnett wrote in August 2019 article for Bitch, “Black women stand to gain the most from disrupting the individualistic and exclusionary system of capitalism. Instead of championing the wealthy, we must champion the redistribution of wealth.” According to the Bureau of Labor Statistics, the median weekly earnings of someone working full time is $936, the median earnings of Black people as a whole are $756, and Black women’s median is $738. As such, people aren’t impressed with celebrity culture and excess wealth, especially given that it’s an election year and class consciousness is en vogue because financial stability is barely attainable for the majority.

Streetwear has been pathologized because it has long been the uniform of the displaced, disenfranchised, and working class.

The cultural view of streetwear is changing as well: Alexander Wang didn’t recreate the tracksuit in its entirety when he partnered with Adidas in 2017, but due to his involvement, the tracksuit became high fashion. As Sultan Isahafan writes in a 2019 article for Brainwash, “Streetwear, point-blank, has simply been about re-contextualizing fashion for the streets. It does not exist as a subset of clothing; it is youth culture expressed with clothing, unique to its own microcosm.” Streetwear is as utilitarian as it is egalitarian. The Adidas tracksuit in all its polyester has had many lives, from the Olympic stadium to fashion runways to the streets—but the cool emulating from the people that popularized it can’t be taken on and off like a tracksuit. It can’t be sold, despite the intentions of Ivy Park. “When you think of Beyoncé you think of these gowns, extravagance, not streetwear, it’s an interesting contradiction that she’s trying to sell athleisure/streetwear to Black people,” says writer Devyn Springer. “Streetwear is synonymous with Black fashion and we’re at a moment where people are trying to depoliticize it.”

As a whole, streetwear has been pathologized because it has long been the uniform of the displaced, disenfranchised, and working class, and it is often conflated with laziness because of who chooses to wear it. (In many larger cities, such as New York City, London, and Paris, certain establishments use dress codes to exclude people—many of them Black and people of color—from wearing sneakers or baseball caps.) Athleisure, on the other hand, has been primarily marketed toward white women. It’s readily available, created for those with busy, heavily-regimented lifestyles; that’s the reason the clothing looks almost uniform-like. From the beginning, athleisure has been worn to distance its wearer from the stereotypes associated with streetwear; over time, athleisure’s hyperfunctionality has become the antithesis of streetwear and the person wearing it has become less likely to be policed.

In the January 2020 issue of Elle, Beyoncé said that she “designs IVY PARK with everyone in mind, emphasizing a ‘fly’ look for all—whether dropping off the kids, going to the gym, or out on a dinner date.” Beyoncé isn’t hurting for wealth, power, or fame, so it’s strange to think she would need to drum up publicity for any of her ventures, especially when her surprise album changed the landscape of the music industry. She doesn’t need another business venture, as she sings in “Boss,” a song on the 2018 Everything is Love album, “Ain’t nothing to it, I bossed up out my momma whip/ My great-great-grandchildren already rich.” So why are we making Beyoncé richer by shopping Ivy Park, especially given the way the line sidesteps its own cultural history? Beyoncé’s estimated net worth is $400 million, and she doesn’t need to work for the rest of her life. She simply doesn’t relate to the precarious state most of her fans exist in, especially her primary audience of Black women; and, with this Ivy Park release, she is illustrating yet again the way that wealth and its gifts are circulated among the wealthy while the rest of us sit back and watch, waiting for our turn.

by Tamara Winfrey Harris
The policing of feminist cred is the real moral contradiction.
by Najma Sharif
View profile »

Najma Sharif is a writer living in the void.