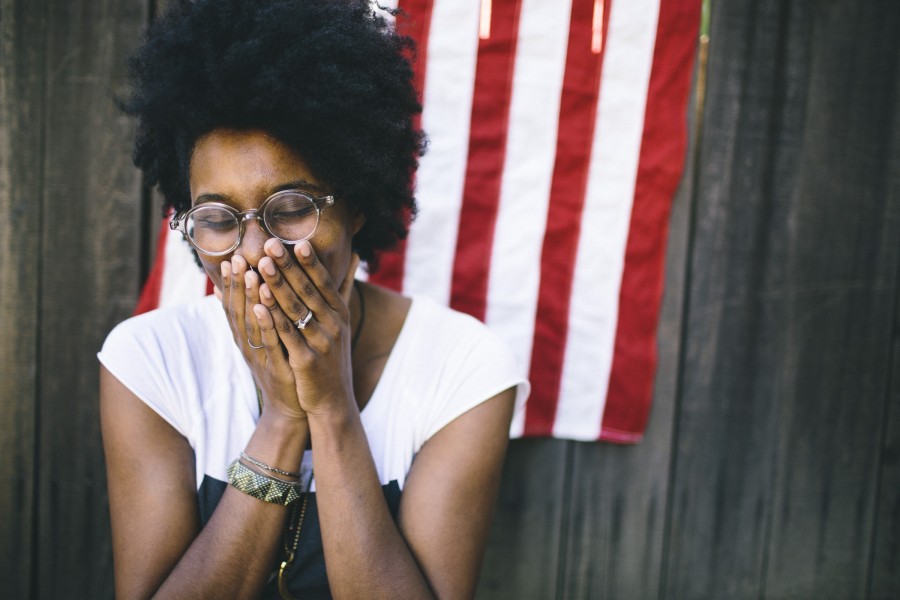 Portland activist/writer/photographer Margaret Jacobsen is used to organizing, but when they took over as lead organizer of the Portland Women’s March, they inherited a potentially huge event that was plagued from the start by conflicts between intersectional feminists and those who saw intersectionality as a source of discomfort and distraction. The initial organizer, who lives in Eastern Oregon, had advocated for a march that was conflict-free and not “political”—a decree that translated into muffling the voices of would-be marchers who wanted to do more than pop on a pink hat and bask in the womanity of it all. But after the Portland chapter of the NAACP, a march cosponsor, rescinded its support for the event, Jacobsen had two weeks to pull together a march that aimed to reflect myriad issues and challenges, from Black Lives Matter and immigrant rights to preserving healthcare and transgender rights. There’s no question that the march was a success—though Jacobsen had planned for an attendance of about 20,000, the city turned out in a big way, with 100,000 attendees and a roster of speakers, mostly women of color.

But, as with so many of the marches around the world, after the witty signs were laid down, the photos posted, and the crowds headed home, the question of what happens next loomed—and, with the Trump administration working quickly to fulfill racist, xenophobic, and antichoice campaign promises, looms even larger now. We caught up with Jacobsen to hear their thoughts on what the Portland march accomplished, and how we can harness the energy and passion of the day for sustained change.

So, two days later: How do you feel?

On Saturday I felt really hopeful. Sunday I was processing things. And now I’ve kind of arrived at this place of, “Okay, so we marched, and it was good, and we gathered.” You know, I love long-term planning. I love trying to mobilize people. But I’m now arriving at a place of [thinking that] it wasn’t an actual protest, in the sense that we didn’t really disrupt anything. The city knew what we were doing. The cops were there and agreeable. We essentially paid to be able to protest.

We gathered, and that’s great, that’s really wonderful. But now what are we gonna do? What do we do next time?

After the marches, on social media, I kept seeing white women emphasize that agreeability. “This was so peaceful. The cops were awesome.” But why were they peaceful and awesome? Because people of color were not the majority at so many of the marches.

I understand people have this expectation of protection, and I think white, privileged people who wanted [the march] permitted and wanted cops there for safety. But a lot of the people who were marching for their rights can’t call on that privilege or that safety when they’re being pulled over based on their skin color and being attacked. And so the march was beautiful and inspiring, but we also have to challenge the fact that [there were] so many white women posing with policemen during this march, after we had had so many hard discussions about being a person of color in America. And then when people pointed out that [those photos] were offensive, these white women are like, “Why can’t we all get along?”

Someone just sent me an article where it was like, “Women are now blaming women of color for changing the [march]” And I was like, good! Let them blame us.

I wrote an article last year about how I recorded microaggressions, and I had a white woman email me. She described how she lets people touch her long blonde hair. And she was like, “If you would be kinder to us, we’ll let you into our sisterhood.” And I was like, No. I want nothing to do with your garbage sisterhood. I will make my own sisterhood. Thank you. And there’s been a lot of that type of mentality of that just proves the inherent racism that people have, where they’re like, “If you could just be kinder to us, we would listen to you. If you would be civil.” And it’s like, but you don’t even give us that, right? We’ve had to fight for civil rights.

Leading up to the march, people were upset that I was trying to push conversations about why feminism has gotten to this place where we have to make a choice—either we’re gonna make it intersectional, or we need to leave it behind. And people are clinging to [past] waves of feminism and using it as a badge, as if to say, “I don’t need to be intersectional because I’ve been doing this since the ’60s, since the ’70s. You have no right to critique what we did.”

We honor what you did, we appreciate it, but it also wasn’t enough. You still left people out. You still pushed them to the back. And I feel like I had a lot of conflict, being a Black person, a Black mother who’s raising Brown children. And if [the march was] predominantly people of color with our children, it would probably have been a very different story and a different interaction. So Saturday was a success in some ways. But it’s not enough. We leave so many narratives out of the conversation, and then when you try to include [them], people are like, “Why does it matter? Why do we need to talk about it?”

The symbols of the march, especially the pussy hats, have definitely contributed to the feeling that the march was about normative womanhood. And one way people justify that is to note that for many people, the marches were their first dip into activism. But it’s more complicated than that.

It is. Most of the organizing that I do is with people who don’t naturally lean towards activism. And I do a lot of educating around things and then kind of prodding people into activism and being like, “Great. You have tools now. Go do things and be things.” And so I agree to a certain point, where I’m like, great. I’m glad you showed up. But your hat is the same as a safety pin, you know? And I was reading about a Black woman’s experience. She didn’t wanna march, but she went out anyway. And then her experience leaving D.C. and getting on the train and all of these white women in their hats and their safety pins who were just rude to her.

But if you’re a woman, and you do feel like you’re oppressed, then it should be easy for you to hear someone else be like, “I’m also oppressed, but in a way that you’ve never been oppressed.” It’s not enough to have, to be like, “I’m a feminist! So I can’t be bad!”

I know you’re probably sick of talking about the initial organizing: the initial organizers and Facebook group member were clearly hurt and felt very defensive about the NAACP pulling out and the subsequent change in leadership. Do you feel like there have been any breakthroughs in conversations since then?

When we took over the organizing, we inherited a group page that had, at the time, 9,000 people—now I think it has like 16,000—and the event page that had like 30,000 people who said they were attending, and then the organization page for Portland. And I ripped off all of the Band-Aids. I was like, “I am your new organizer. I’m going to turn off the moderating of comments. Every comment goes. And I want you to have the hard conversations.” And at first, people were like, “This group was so peaceful before. What have you done? You’re disruptive.” And I was like, “Do you know why it was peaceful? Because people were being silenced.”

They were trying to control a narrative that wasn’t even real. They were trying to present this idea of unity even as people were saying, “I’m afraid if I go to this march, I’m not gonna be acknowledged, and I’m not going to be seen.” And those [people] were shut down and blocked. And I was like, “I do not care if you’re going to be angry at me.” Which they all were. And that happened all across the country when people of color and trans people and queer people were like, “We are part of this. Please let us be a part of it.”

Over time, after the shock wore off, a lot of older women in particular started reaching out and saying, “I understand now. I didn’t know.” And some people clung to their fragility and wore that as a cloak. But I would much rather have hundreds of people who started learning than thousands of people who feel comfortable and safe. I mean, it is a safe space, but it’s not a place for them to get comfortable.

And that’s the interesting thing [about] people wanting to march but not be divisive. They were assuming that any conflict was bad. And I believe in healthy conflict. I believe that without conflict, we actually can’t go anywhere; we can’t learn anything. Conflict is not going to kill us.

What, for you, would be the ideal outcome of this march?

To have all of the people who showed up and said they wanted to do things get involved. To have them donate money and support the people who have been working at things every day for years. And that’s kind of a goal: “You wanna show up, you wanna do something? I have ten places off the top of my head for you.”

Would you do it again?

I would do it again. Not tomorrow, though. Maybe in two months.