Boys and Their ToysPrivatizing Space Is the Ultimate Tech Bro Fantasy 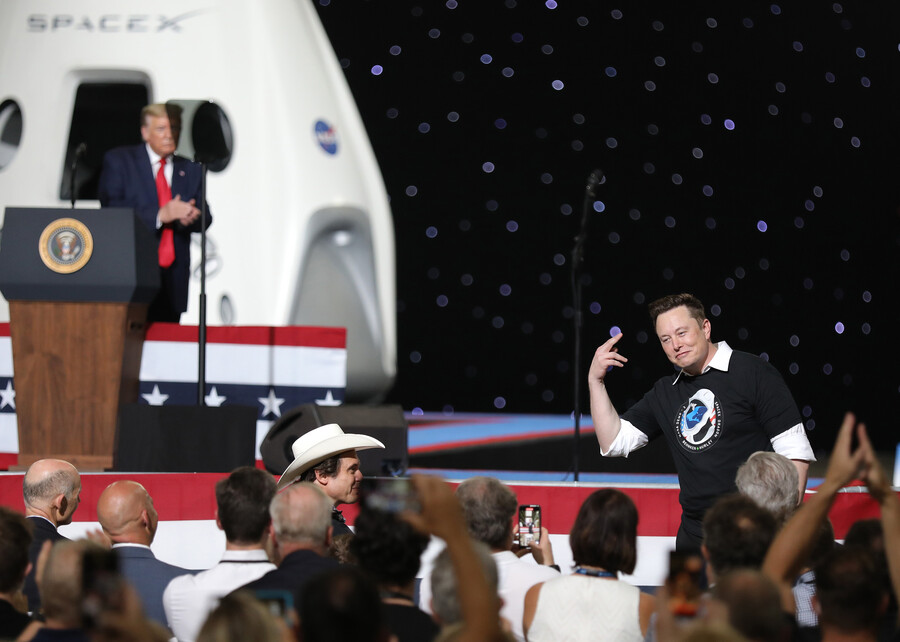 While working my first graduate job at a tech start-up in Berlin, Germany, a city that has been declared one of Europe’s versions of Silicon Valley, I got into an argument with my boss because I’d asked him why our office didn’t recycle. It was 2018, and the climate crisis was reaching a fever pitch: The United Nations had released a landmark report detailing the urgent changes needed to limit global warming to a maximum of 1.5°C in under 12 years, and more countries were committing to lowering carbon emissions. After performing a complex cost-benefit analysis of how much productivity the company would lose per year if each employee took 10 seconds out of their work day to recycle, he looked me dead in the eye, and, with complete conviction, said that there was no point in stressing over climate change because “SpaceX will be flying people to Mars by 2024 anyway.”

My boss was referring, of course, to the space exploration company of dot-com billionaire and Tesla CEO, Elon Musk, whose plans for Mars span from commercial spaceflight trips to the eventual creation of a colony on Mars—an escape route for (wealthy) humankind when planet Earth implodes or runs out of juice. Over time, I’ve come to see this exasperating incident as symptomatic of a wider space-mania among tech bros in the start-up sphere. Alongside beanbag meetings, optimization calculations, and the desire to disrupt for the sake of disrupting, is a preoccupation with space exploration as the pinnacle of entrepreneurial achievement. My then-boss’s retort encapsulated men in tech’s privileged tendency to avert their eyes from the problems down here, and focus them on a shinier extraterrestrial alternative that will allow them to save humankind.

It’s a tendency that has trickled down from Musk and the alpha males at the apex of the non-diverse tech sphere, and it’s one that has come to define the 21st-century space race. A much narrower affair than the international showdown of the Cold War era, this space race is not an ideological battle between East and West or communism and capitalism. Instead, this race takes place firmly within capitalism, as a coterie of tech billionaires compete to privatize the solar system and flex their fantasies for starfaring civilizations. Though Richard Branson and Mark Zuckerberg are among the billionaires vying for dominance in space tourism, Blue Origin, founded in 2000 by Amazon CEO Jeff Bezos, who’s now the richest person on Earth, has been SpaceX’s greatest adversary for the past two decades.

The Musk–Bezos feud picked up steam in 2013 when SpaceX beat Blue Origin to take over the historic Launch Complex 39A at the Kennedy Space Center, where the first Apollo mission to the moon took off in 1969. It has since played out on the public stage in patent disputes and Twitter spats studded with copycat emojis. The phallic symbolism of point-scoring over rockets would almost be too obvious to comment on, if it weren’t for the fact that Musk went so far as to make a “blue balls” joke about the shape of Blue Origin’s lunar lander in 2019. Space exploration is certainly not the sole terrain of white men, and these companies are indeed admirable for their advancement of space technologies, but the testosterone-fueled Twitter beef alone reduces the modern space race to a glorified pissing contest. The earthly pursuits of these tech titans diverge, of course. Musk’s bombastic rhetoric, impromptu dancing, and outpouring of memes have seen him transcend the status of Silicon Valley genius to become something of a cult hero among twentysomething Reddit users.

Even within the troposphere, he already occupies an excessive amount of space. Whether he’s taking the alt-right red pill with Ivanka Trump; “well, actually-ing” his partner Claire Boucher, commonly known as Grimes, for attributing their newborn baby’s name to the wrong aircraft hours after surgery; or even cropping up in the explosive Johnny Depp–Amber Heard court case, it feels like he’s everywhere, manspreading across the zeitgeist. His self-styled assimilation into the “meme-sphere” is so profound that satirical headlines like “Kanye West Drops Out Of Race After Elon Musk Offers Him Position As President Of Mars” are hard to distinguish from his real life. Like his memes, Musk’s approach to space is bold and brash. In 2018, he notoriously launched his Falcon Heavy rocket into orbit around Mars with a red Tesla sports car strapped to it, David Bowie’s 1969 hit “Space Oddity” playing inside, and an astronaut dummy named Starman at the wheel.

If Musk wants to claim the mantle of Bowie’s Starman, then perhaps “the man who sold the world” is a fitting moniker for archvillain Bezos. While Musk made his billions revolutionizing the car and energy industries with sustainable alternatives, Bezos has gutted local businesses and subjected his workers to grueling conditions with the unfettered capitalism of Amazon. As the world slumps into a coronavirus-induced recession, Bezos has emerged from the pandemic as a winner: He’s comfortably on his way to becoming the world’s first trillionaire, and his net worth hit a meteoric high of $180 billion this month (compared to Musk’s $71 billion). Bezos pumps $1 billion of his fortune into Blue Origin on an annual basis, and elaborated his own vision for a starborn civilization during his 2019 “Going to Space to Benefit Earth” speech.

He glanced over Earth’s “immediate problems” of “poverty, hunger, homelessness, pollution, overfishing in the oceans”—all of which are within his budget to tackle—before delving into plans to solve Earth’s “long range” problems, such as eventually running out of energy. Bezos proposes the transfer of heavy industry and trillions of humans to free-standing space settlements, akin to those envisioned by Princeton University professor and physicist Gerard K. O’Neill. In doing so, Earth will be preserved as a sort of paradisiacal natural park (for those wealthy enough to take vacations, that is). Just as Musk presents himself as the Peter Pan of the tech world, in his speech Bezos tenderly prefaced his space colony idea as “my version of a misspent youth,” a passion project dating back to his high-school days. But behind this smoke screen of childlike wonderment and boyish innocence, Bezos’s dreams for a starfaring civilization reek of entitlement and reveal a willful ignorance to the fact that Blue Origin is bankrolled by the very corporate practices damaging Earth in the first place.

For Musk, the evasive tendency of final-frontier dreaming and the darker undertones of post-Earth expansionism reached a symbolic zenith in May. As the United States erupted into anti-racism protests in the wake of the murders of Breonna Taylor, George Floyd, and Rayshard Brooks at the hands of the police, and police violently attacked peaceful protestors, Donald Trump was looking skyward at the launch of the first crewed spaceflight operated by a commercial provider—SpaceX’s Crew Dragon Demo-2. While cities burned and innocent people were arrested, Musk gave an emotional post-launch press conference in which he declared the United States “a distillation of the human spirit of exploration” and celebrated the launch as “something that all of humanity can get excited about. It’s just a fundamentally positive good thing, and I think we need more positive, good things in this world.”

For white male tech bros, once you’ve gamified and “won” at Earth’s power systems, the irresistible next step is conquering space.

Musk described it as an essential step toward his Mars colony, which he pitched as a moral imperative: “We must make life sustainably multiplanetary…I call upon the public to support this goal.” It’s seemingly lost on the tech behemoth that they’re romaniticizing interstellar colonial expansion as the United States still suffers the horrific consequences of its last colonial project—the slavery and racism the “new world” was built on. Musk echoed the neocolonial language of conquest, new frontiers, and necessary sacrifice that riddled his speech at 2012’s Mars Society Convention. By creating a base on the red planet, Musk said, “terrible and great things will happen along the way, just as happened in the formation of the United States.” Musk and Bezos’s competition to “save” humankind with their respective brands of capitalism embodies what Irish author Mark O’Connell calls “the overwrought performance of masculinity” amongst doomsday preppers in his 2020 book, Notes From an Apocalypse: A Personal Journey to the End of the World and Back. O’Connell draws incisive parallels between the pursuit of extraterrestrial colonies and critic Sarah Sharma’s theory of “the male fantasy of exit.”

Sharma describes how “‘pulling out’ is a deceptively simple solution to real-life entanglements” and “the very privilege to imagine doing so is fundamentally a male prerogative.” She sees the male privilege of exit—the deferment of responsibility that was latent in my boss’s cavalier attitude toward recycling—as directly opposed to the act of “care.” While women are typically encouraged to nurture the world around them, men have the power to enter and exit spheres, including interplanetary ones, as they please. For white male tech bros, once you’ve gamified and “won” at Earth’s power systems, the irresistible next step is conquering space and justifying that thirst for growth with savior narratives. Beyond the battle of egos on Twitter, the patriarchal projects of colonial expansion motivating the current space race are deeply disturbing. Faced with the prospect of a Musk- or Bezos-shaped kingdom in the stars or eventual extinction, I’d opt for the latter.

by Elizabeth Yuko
In the 1960s, a group of women spent months training for space travel. But they never got to go. 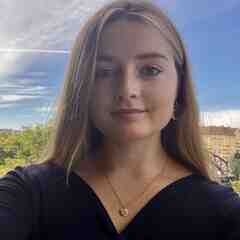 Madeleine is a freelance journalist covering art, culture, current affairs, digital trends and gender. Her work has been featured in the Financial Times, VICE, The Independent, EXBERLINER Magazine and Elephant, among others. She lives in Berlin. To see more of her writing or to say hello, check out her website.