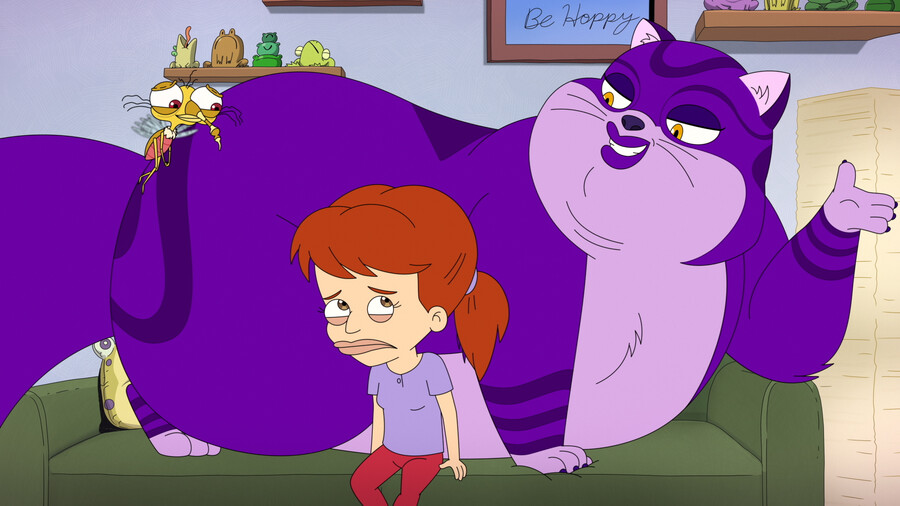 Big Mouth has never shied away from mental health, especially when it comes to Jessi (Jessi Klein), a foul-mouthed, sarcastic preteen. The series introduced Depression Kitty (Jean Smart), the large purple cat who mostly circles Jessi, in Season 2. Jessi doesn’t quite feel like herself throughout the season: She argues with her parents more than usual and shames other girls at school—including Gina (Gina Rodriguez), who grows large boobs before the rest of the girls and therefore garners much of the boys’ attention. Jessi’s parents’ divorce acts as the final straw that prompts Depression Kitty to overwhelm the rest of her life. She stops spending as much time with her friends, avoids her family, and even abandons her Hormone Monstress, Connie (Maya Rudolph), who had previously been her guide to all things puberty (for better or worse). Depression Kitty sucks Jessi into a lull, encouraging her to come back to bed, telling her she’s worthless, literally weighing her down by placing her large, furry body on top of Jessi’s, and urging her to stop caring about anything at all.

Depression Kitty returns in Season 4, but this time she’s made more powerful by the arrival of Tito the Anxiety Mosquito (a shrill Maria Bamford), in Jessi’s life. Depression Kitty and the Anxiety Mosquito reunite in Jessi’s bedroom like old friends, enthusiastically embracing each other and commenting on how they’re inserting themselves into the life of yet another teen girl. Amid their excitement, one thing becomes clear: They like to bring depression and anxiety to any teen they can get their hands on, but there’s something special about getting to take down young women like Jessi. The Anxiety Mosquito isn’t unique to Jessi. In fact, we meet Tito at summer camp, which Jessi attends alongside our standard cast members—Andrew (John Mulaney) and Nick (Nick Kroll), plus a few new characters.

One of our newcomers is Natalie (Josie Totah), who comes out as a trans girl on the first day of camp; it’s through Natalie that we get our first buzz of the Anxiety Mosquito, who appears at Natalie’s ear and encourages her to be passive, to not fight back against the transphobia she experiences from both camp leaders and her fellow campers. Natalie, though, is able to swat the mosquito away, and instead she does the opposite of what it requests: She bravely stands up for herself and finds comfort and friendship in Jessi. Natalie’s rejection doesn’t deter the Anxiety Mosquito. Instead, it ramps up in Nick’s story. Reeling from his falling-out with former best friend Andrew, Nick is relentlessly stalked by the mosquito. In one scene, as his camp anxiety hits a fever pitch, Nick finds himself standing in the woods and surrounded by a circle of the mosquitos, all of which shout stressful comments at him. “You’re going to have the worst summer, and everybody’s going to hate you!” one tells Nick.

They reappear in the showers, when Nick gets self-conscious about how the boys compare their naked bodies, and again in episode three, when Andrew mocks Nick in front of their classmates. The mosquitoes gather and form the shape of Andrew’s face to taunt him, and Nick gasps and says he thinks he’s having a panic attack. It was interesting to watch how Big Mouth navigated the introduction of the Anxiety Mosquito as a new, stressful character. Tito’s introduction in this particular season makes sense: The narrative is no longer just about periods, masturbation, and first crushes; the storylines have shifted and grown as the preteens do. They’re not only worrying about their bodies; they’re worrying about who they are in the context of their peers, who they want to be, and who they hope to become. Their internal thoughts no longer circle the drain over what a “normal body” is—they’re more concerned with being loved or hated, with feeling shame and guilt.

As camp comes to an end, Nick feels his anxiety lessening and says he’s glad to be leaving Tito behind. Of course, this isn’t the case: Anxiety doesn’t end just because one life event is over. Instead, we watch as a haze of mosquitos follows the teenagers right back to their homes. For Jessi, the Anxiety Mosquito amps up yet again as she starts her first day at a new school. (Her mother moved them to the city in the Season 3 finale.) Depression Kitty and the Anxiety Mosquito keep her insecure and nervous, as Tito taunts her at school—“This class is way too hard. Or maybe it’s just that you’re not very smart?”—and Depression Kitty lures Jessi back to bed yet again. She sobs under her covers, away from her home and away from her friends, struggling even more than she was before. 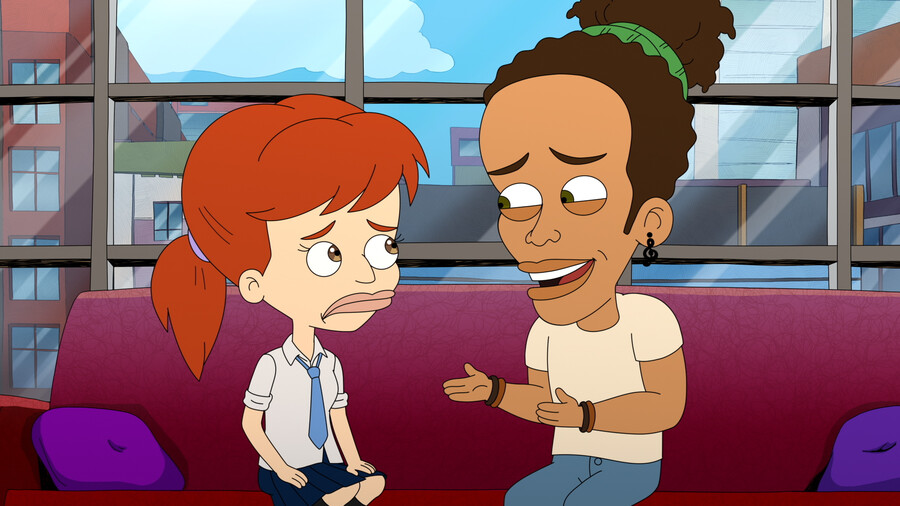 One day while skipping school, it feels like change is afoot as Jessi meets another kid who’s also playing hooky. Michael Angelo (Sterling K. Brown), who’s a year older than her, is what it takes for Connie to swoop back into Jessi’s life, riding a literal wave of Jessi’s physical response to the “international hunk of mancakes” that is Michael Angelo. He’s a massive jerk, a fact that’s obvious to anyone over the age of 16, but to Jessi, he’s just a beautiful teenage boy with gorgeous curly hair and an overinflated ego. He paints portraits on the streets, and Jessi swoons and shifts the way she speaks and carries herself to appease him. But of course, a new crush isn’t enough to stave off depression and anxiety. Instead, it’s in Jessi’s relationship with Michael Angelo that we see the true gendered element of Big Mouth’s portrayal of mental illness. Michael Angelo, asshole that he is, begins manipulating Jessi by talking about how they never go further than making out.

He says he’s in “agony” because his “blue balls” are just killing him. He turns to her and asks whether she could imagine having a stomach cramp, clearly a nod to how so many cis men act as though cis women have never experienced any real pain. Connie, our voice of reason, snaps, saying of course Jessi can relate, but her voice is masked by those of Depression Kitty and the Anxiety Mosquito. “It’s a hand job, it’s your job,” Tito panics. We launch into a scene where a pair of blue balls are taken to the “blue-balls ward of the boy hospital,” while Connie shouts about how there are no free tampons yet (of course) there’s a blue-balls ward. As they die in the hospital bed, the blue balls say, “Thanks for nothing, Jessi.” Then they explode, and Jessi is horrified. As a result of the pressure from her anxiety, her depression, and of course, Michael Angelo himself, Jessi finds herself kissing her boyfriend that evening and worrying about what should come next.

The trio of characters—Connie, Depression Kitty, and the Anxiety Mosquito—appear behind the sofa, watching and offering their own takes. It’s a perfect illustration of how puberty, anxiety, and depression combine and leave young women like Jessi vulnerable to the desires of manipulative boys and men. “No one’s ever gonna want you,” the Anxiety Mosquito asserts, voice high and panicked per usual, and Jessi is coerced by Michael Angelo. The scene is less stressful than it sounds, given that Big Mouth is committed to its humor above all else. Instead of panicking like the Anxiety Mosquito, Jessi actually laughs out loud at Michael Angelo’s penis. Connie and Jessi converse with it, mocking the penis and playing with it as they, too, laugh out loud. Although the moment ends with Michael Angelo snapping cruelly at Jessi and dumping her, it’s clear she’s going to be okay. Though she’s sad about Michael Angelo, she still has Connie. While the episode illuminates how anxiety and depression led Jessi astray, it also illuminates the strength of the character—who, as the season continues, learns a lesson about her own power.