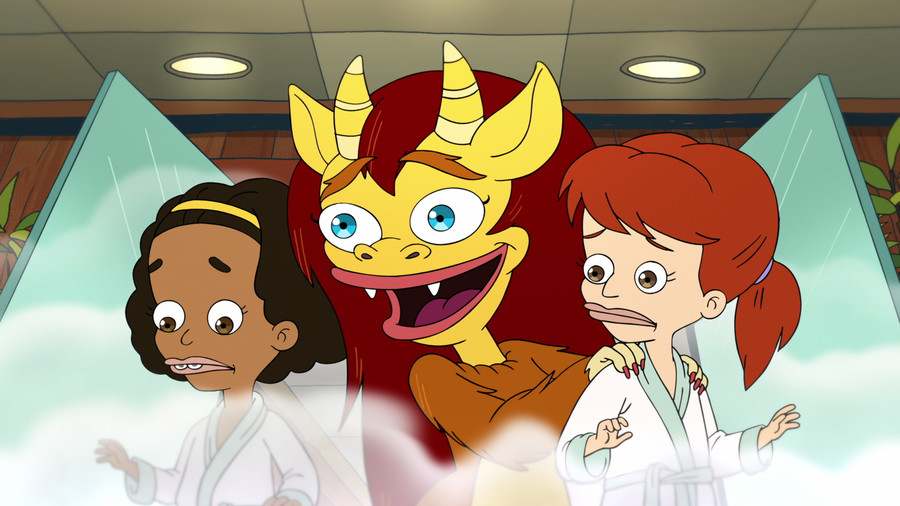 Though Big Mouth’s main characters are largely male, the show’s girl characters really make it sparkle. Nick (Nick Kroll), an insecure and sometimes-thoughtful boy; Andrew (John Mulaney), Nick’s best friend and the show’s eventual asshole; and Jessi (Jessi Klein), who becomes more and more rebellious as the show progresses, are Big Mouth’s core characters in the first season. But by the third season, Jessi is joined by Gina (Gina Rodriguez), the first girl in school to start visibly developing, and Missy (Jenny Slate), an extremely sweet girl who’s the most well-versed in sex. These teens are notable because of their range: none of them are the same or even similar. Though Big Mouth has been critiqued, it has grown a cult following largely because it manages to explore puberty and sexuality without objectifying any of its characters.

“The show is an excellent meditation on sexuality overall but I think it does an especially great job showing the subtleties and double standards of female sexuality,” says film critic and writer Caitlin Kennedy. “The first scene that comes to mind is the Korean Spa in Season 2.” When she realizes that her daughter is developing insecurities about her changing body, Missy’s mom takes her and Jessi to a spa where she immediately strips down. The girls are initially shocked and nervous, but then they see bodies with different shapes, sizes, and colors. They’re also serenaded by Connie the female Hormone Monster (Maya Rudolph) with “I Love My Body,” a body-positive anthem we all could’ve used as teenagers.

“Having a scene like the Korean Spa, where every type of body is praised, displayed, and viewed as a source of empowerment and joy, [rather than] the lens of sexualization, is huge for a female viewer,” Kennedy says. “Missy is a perfect vessel for performing how that insecurity blossoms and grows in young women.”

Missy’s innocent naiveté is one of the reasons she’s become a fan favorite. Not only is she one of the show’s only Black characters, but she’s a sweet and kind teenager who still wears overalls and displays refreshing awareness about herself and others. “There’s something about Missy that resonates with me because, even though the main characters are in seventh grade, she has this childlike innocence that blends with the raging hormones that hit at this age,” says copywriter and marketing strategist Rebecca E. Carvalho. “There’s something in her that’s clinging to the ‘old’ her as she grows up. I was really touched by this portrayal since so many children shown at this age in TV and film seem to have it all figured out.”

Black writer and director Kirby Marshall-Collins developed a similar connection with Missy. “Missy is an unexpected revelation,” she says. “I love her every season because she’s an intelligent, brown girl who looks adorable in her overalls and writes her fan projects in between all of the chaos happening in middle school. But as Season 3’s intro reminds us, Missy’s developing at a different time than most of her friends.” Sex isn’t a new concept for Missy, thanks to the open conversations she’s had with her parents, so she has a deeper understanding of sexuality than most of her classmates. “I relate the most to Missy and her overflowing imagination and curiosity,” says bisexual writer Ella Dawson. “I love that she’s both a nerdy kid struggling with insecurities about her body and her slower physical development while writing gleeful queer romances starring Nathan Fillion for her own amusement. That she can be both sexual and reserved, horny and brilliant, is a really lovely change of pace from the narrow way teenage and preteen girls are usually written in pop culture.”

If Missy is the show’s sweetest teen girl, Jessi is its most angsty. Throughout the show’s three season, Jessi has undergone a major character arc. She’s un character because she could care less about being polite: She cusses out her mother, steals and breaks rules, and constantly lashes out because her parents divorced after her mother decided she wanted to date women. But Jessi’s behavior can be attributed to the unspoken hurt she’s feeling—a hurt given space onscreen. She’s given a Depression Kitty, which literally embodies her pain. “I loved seeing Jessi go through the season primarily without Depression Kitty coming back,” Marshall-Collins says. “She gets through her mother’s breakup, strengthens her own friendships, and Depression Kitty [still] slips back into her life. Jessi even says ‘I thought I got rid of my depression,’ but these imbalances aren’t something that people can get rid of without actually working at it.”

Jessi’s also allowed to be messy in a way that many teen girl characters aren’t. She’s smart but she steals, she’s depressed but she’s funny, she’s insecure but she still has some confidence. “I think of the ‘Sexy Red Bra’ scene early on where she experiments with sexual power and realizes that it’s more than what she’s ready for, at this time,” says Kennedy. “Teenage girls sit in a really bizarre social position of being children—of being inexperienced and undeveloped in some ways and not being fully ready for all that sexuality entails. But they’re also developing those urges and feelings in a hypersexed culture that’s already appraising their bodies as sexual currency. Jesse is perhaps the quintessential illustration of the female experience.”

Much of the realness around Big Mouth’s portrayal of its teen girls is that they don’t all feel thrilled about their more “adult” bodies, something noteworthy considering the way that men have historically written about women’s bodies. Instead, the teen girls of Big Mouth experience a great deal of frustration, shame, and, yes, sometimes enthusiasm, about their new, changing bodies. We first connect with Gina in Season 2’s “What Is It About Boobs?” episode when she becomes the first of her peers to develop breasts. The boys she encounters as her body changes make gross comments and hugely objectify her, and in the “Dark Side of the Boob” episode, Gina is slutshamed when people learn that she let Nick feel her up. “I kept yelling at the screen: That was me!” says editor Danielle Sinay. “I was a D at 11, DD at 12, E at 3, [and] eventually HH. That’s really how boys and girls treated me in middle school. It was hell..” Though Gina doesn’t get a lot of screentime, it’s clear that Gina isn’t just the hot girl that Nick gets to explore with. She’s a fully fleshed-out person.

While Big Mouth is a show about teens of all genders going through puberty, it shines best when it delves into the worlds and inner workings of its teen girl characters. The story of how boys and men feel about pleasure and sexuality has been explored time and time again, with shows ranging from Sex Education to Family Guy building entire narratives around male pleasure; the high-school-boy-loses-virginity story is a genre in its own. In the same way that films like The To-Do List, Blockers, and Booksmart have toppled the likes of American Pie and Porky’s by homing in on young women’s sexuality, Big Mouth is also reshaping cultural narratives about puberty.