Billie Eilish’s Body is Not Ours to Claim | Bitch Media

Billie Eilish’s Body Is Not Ours to Claim 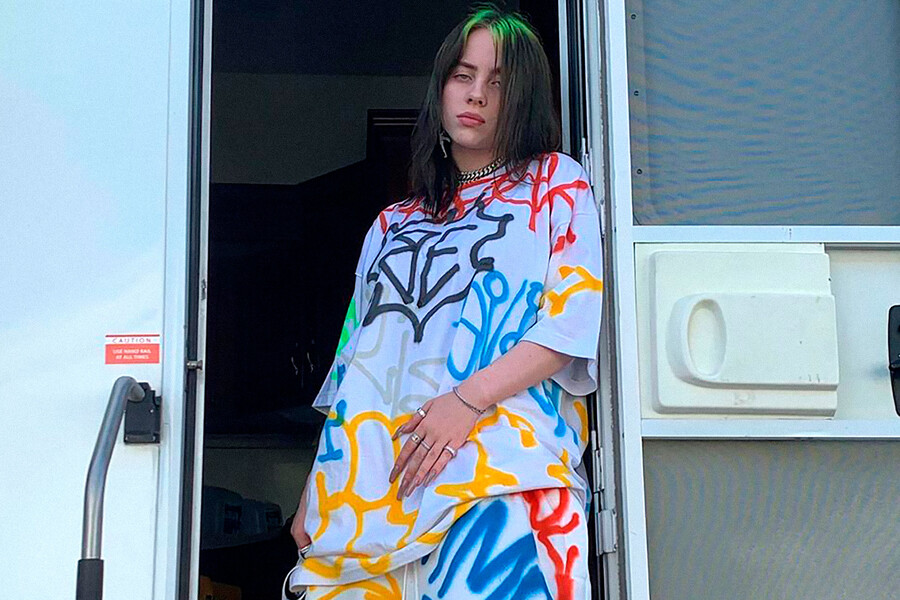 Since the moment she exploded into the music scene with 2016’s viral “Ocean Eyes” and solidified her standing among pop giants with her 2019 studio album When We All Fall Asleep, Where Do We Go?, there was an immediate obsession with Billie Eilish—and with her body. The now–18-year-old star would become known for the dark themes in her pop music, with her debut studio album debuting atop the Billboard 200 and becoming the best-performing album of 2019. She won the American Music Award for New Artist of the Year in 2019, and the Grammy Award for Best New Artist in 2020. But, as with so many young women who find themselves in the spotlight, Eilish’s body and fashion choices have spawned as much cultural obsession as her music. Eilish is more likely to be found in baggy cargo pants than in tight jeans, favors men’s t-shirts over blouses, and, even at awards shows, prefers loose tracksuits and chunky sneakers to gowns and heels.

Her style is both innate and intentional; as she explained in a 2019 Calvin Klein commercial, “I never want the world to know everything about me. I mean, that’s why I wear big baggy clothes.” Eilish’s own choices can’t stop assholes from being assholes, of course. On Wednesday, a man in the United Kingdom tried to shame Eilish after paparazzi shared photos of her dressed in a tank top and going about her business. The man tweeted out the photos with the sneering comment, “In 10 months Billie Eilish has developed a mid-30’s wine mom body.” The backlash was swift, with people jumping to Eilish’s defense by offering counter-opinions on the photo and on her body. It’s normal! It looks like theirs! It’s fine if she isn’t as thin or as curvy or as tall or as short as her pop-star counterparts! At the end of the day, it felt like everyone had something to say about Eilish’s body, despite her years-long effort to prevent exactly that.

Eilish is well aware that her decision to prioritize her music over her appearance makes her an outlier in the notoriously gendered music industry. “I wear what I want to wear,” she told V magazine in 2019. “But of course, everyone sees it as ‘she’s saying no to being sexualized’ and ‘she’s saying no to being the stereotypical female.’” On the first night of her 2020 world tour, the artist played a short film titled Not My Responsibility that addresses the subject. Against a moody, shadowy background, Eilish slowly removes layers of clothing while her own voice intones, “If what I wear is comfortable, I am not a woman. If I shed the layers, I am a slut…. Some people hate what I wear, some people praise it. Some people use it to shame others, some people use it to shame me. But I feel you watching, always. And nothing I do goes unseen.” The message is clear: she hears us, and she knows what we’re saying.

“Would you like me to be smaller? Weaker? Softer? Taller? Would you like me to be quiet? Do my shoulders provoke you? Does my chest? Am I my stomach? My hips? The body I was born with, is it not what you wanted?” It’s a game she’s not interested in playing, and yet it’s a game she remains trapped within. Unlike the young, white, female teen pop stars who came before her, Eilish has come of age at a moment in which female celebrities can use social media to express their disdain for the tabloid-media machine that strokes an often context-free obsession with their bodies. In contrast to the millennial likes of Britney Spears and Christina Aguilera, Eilish has access to both the power and the language necessary to describe her experiences and defend herself. And in many ways, media itself is more willing to challenge itself: Magazines that in 1995, would have told Eilish to be grateful for her fame are ones that in 2020 stand alongside her and confront the misogyny that comes with celebrity.

In August 2019, in a now-deleted post on Instagram, Eilish critiqued Nylon Germany for a bizarre cover that pictured a bald, topless digitized likeness with visible, glossy decolletage. “You’re gonna make a picture of me shirtless? That’s not real? At 17? And make it the cover? Even if the picture was supposed to look like some robot version of me … I did not consent in any way. 4. ANNNDDD YOU’RE GONNA REMOVE ALL MY FUCKIN HAIR? booooooooooo to you.” These days, former teen stars readily address their inability to push back against their own media objectification. Natalie Portman famously spoke during the 2018 Los Angeles Women’s March about the “sexual terrorism” she faced at only 13: After her breakout role in Léon: The Professional, she was sent a fan letter more akin to a “rape fantasy,” and a local radio show counted down to her 18th birthday. In the 2016 New Yorker piece “The Sexual Innocence of Britney Spears,” Amanda Petrusich explored the trajectory that took Spears from sexualized pop nymph to angry public head-shaving: “There was a pleated skirt; some increasingly sexualized choreography; a stretch of erratic behavior; some botched, dead-eyed performances; a couple of hospitalizations,” Petrusich wrote, “and eventually a man with bleached hair and eyeliner was sobbing on the Internet, supine and agitated, begging the world to leave her alone.”

Billie Eilish’s desire to claim her body rejects a gaze that fans and media have always felt entitled to.

Miley Cyrus, who shocked viewers during her MTV Video Music Awards performance with Robin Thicke in 2013, told Harper’s Bazaar in 2017, “People were so shocked by some of the things that I did. It should be more shocking that when I was 11 or 12, I was put in full hair and makeup, a wig, and told what to wear by a group of mostly older men.” At only 19, Eilish’s body has been examined and discussed by everyone from creepy male celebrities and internet trolls to adult women hosts of entertainment news shows that reshare videos and Boomerangs of her in bikinis. Meanwhile, on TikTok, young lesbians and queer women enthusiastically and curiously seek to claim Eilish, commenting, “She has to be gay, look at her clothes, she’s like us!”

Grown men who host radio shows count down to her 18th birthday just as revoltingly as they’ve done since the days of Spears, the Olsen Twins, and many others, reporting excitedly that she has “teased” that she might “ditch the baggy clothes when she turns 18.” On Reddit, one user offered, “I am waiting [sic] the days until Billie [E]ilish turns 18 so I [can] beat off to her instagram.” Eilish has made it undeniably clear that she doesn’t want to be a sex symbol. In Not My Responsibility, Eilish asks “Is my value based only on your perception? Or is your opinion of me not my responsibility?” It’s rare for pop stars to be granted privacy—especially when they’re young, and especially when they’re women—and Eilish’s desire to claim her body rejects a gaze that fans and media have always felt entitled to. Regardless of how we comment on her body—whether it’s to praise it or relate to it as a statement of body positivity or warp it into masturbatory material, it’s still an act that goes directly against Eilish’s wishes. The more she pulls away, the more we reach out to suck her back in, and the more we strip her of her right to exist as an artist, rather than a body.