Bioliteracy Sounds Awesome, But It Needs To Be Inclusive, Too. | Bitch Media

Bioliteracy Sounds Awesome, But It Needs To Be Inclusive, Too. 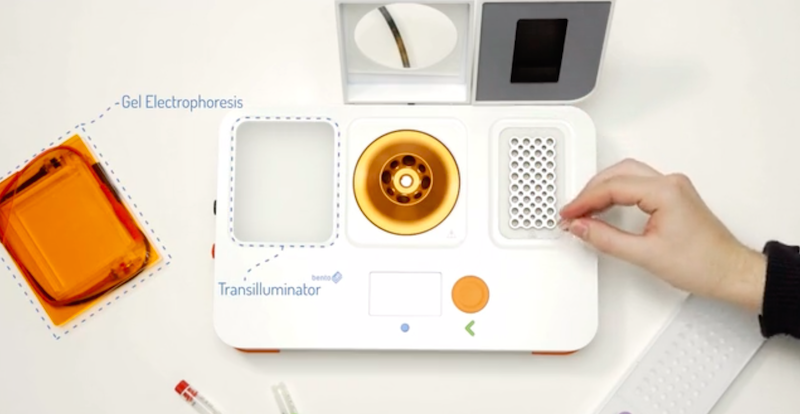 New DIY science kit Bento Lab hopes to be “a DNA laboratory for everybody.”

If you’re not someone who works in biotech, you might assume that something called CRISPR is a dating app for people who really love bacon. It’s actually the name of a new genome-editing technology that allows scientists to more easily find and replace genes within animal, plant, human, or bacterial DNA. But can you imagine if curious citizens, rather than just well-read scientists, had the tools to decipher the hype surrounding the latest biotechnologies?

That’s exactly the goal of public hackerspaces dedicated to DIY science that can be found in London, Paris, Sydney, California, Montreal, Mexico, and elsewhere around the world. The future where biology meets technology is exciting, trendy even—as Bill Gates famously told Wired, if he were a teenager today, he’d be hacking biology instead of computers.

The push toward public bioliteracy—the ability to understand, analyze, evaluate, and apply scientific concepts and new technologies—was among the most interesting topics under discussion at SynBioBeta, London’s premiere synthetic-biology conference, which happened on the weekend of April 6th. At the conference, entrepreneurs, industry leaders, venture capitalists, students, and bio-enthusiasts gathered to get the scoop on the newest developments and tools in synthetic biology. At the sessions, scientists covered everything from using CRISPR to alter a mosquito’s genes—preventing it from carrying malaria—to creating customized anti-aging products based on your DNA. Yet whatever the topic, the message was clear: Emerging biotechnologies that are capable of altering the genetic makeup of the planet and the human condition are no longer science fiction. And we need to understand what they are, how they work, and whether or not we should be pursuing them.

Molecular biologist Ellen Jorgensen, for instance, envisions a future where everyone will have a baseline knowledge of DNA, since, as she puts it, “biotech is bleeding into every part of our lives—there needs to be a better understanding of it.” Jorgensen is the cofounder of Genspace, a community lab in a Brooklyn warehouse where members can do things like edit genes into bacteria and get crash courses from Jorgensen on sifting through the hype around CRISPR. Noting that “people are usually intimidated by spaces that are foreign to them,” Jorgensen sees Genspace, and other hackerspaces where people learn about biotech and computer science or engage with miscellaneous DIY projects, as crucial sites of education. At Genspace, there are formally educated scientists, artists, hackers, and students openly collaborating on projects. At $100 per month, membership isn’t cheap, but Genspace is pursuing grants that would help bring in members from underrepresented and economically disadvantaged communities. Through their partnership with the Urban Barcode competition, Genspace is also able introduce high-school students from around NYC to the community lab.

Then there’s Bento Lab, a lab in a box that offers citizen scientists the ability to engage in hands-on molecular biology. Users can, among other things, analyze the type of meat in their hamburgers or investigate the genomic DNA in their environments. Bethan Wolfenson, along with cofounder Philip Boenig, wanted to create Bento Lab in part because when it comes to biohacker spaces, as with traditional science, male-dominated labs are the norm. “DIY bio is a great concept, but [the reality] too often is like a bunch of white dudes in their 30s and 40s,” she notes.

But amid all our excitement about being at the forefront of citizen science, there is also a danger that these initiatives could replicate the same monoculture they are trying to erode. As Boenig notes, often “tools that are sold are as ‘democratized information’ usually benefit those who would have access to those tools anyway.” One of the stretch goals of Bento Lab’s Kickstarter campaign (which they hit in just 36 hours) is to address this issue by making the the kit accessible to schools in low-income communities. But when it takes three years just to build hardware and your company is just starting out, finding ways to make your product immediately affordable can be a challenge.

Any fresh approach to science education involves taking on these challenges—as well as acknowledging the political and social forces which shape science education and scientific discovery. To do that, we can’t just advocate for more public science tools or biohacking spaces or STEM funding—we need a bioliteracy push that integrates the perspectives and methods of other disciplines. Many artists and designers have begun to integrate their perspectives into the field of synthetic biology with fascinating results, and the possibilities for feminist biohacker spaces are blooming. A collective of Spain-based radical biohackers and “TransHackFeminists” called GynePunks have focused on reclaiming the body by developing DIY gynecology instruments and educating others about the profession’s often-ugly history of experimenting on female slaves.

Applying feminism, antiracism, and social science to disciplines that are too often treated as discrete collections of objective data enriches our understanding of what science is and how it’s relevant to our lives, our politics, and more. To truly move toward a bioliterate world, we need to understand biological sciences and scientists as part of the society in which they exist, rather than as impartial observers. Or, as Andrew Webster, the Director of Science And Technology Studies at University of York, wrote this month in Nature, “Change in the direction of science cannot be viewed from a single position. It is relative and depends on the position of the observer and on the interplay of diverse knowledge communities.”

If we don’t start our best efforts towards citizen science by examining our own positions in the world and asking ourselves questions like “Who or what is this technology serving?”, “Is this technology useful or accessible to a particular community?”, and “What bias am I bringing into my project?” then we risk replicating the same systems we’re trying to erode. We cannot simply treat the current trajectory of scientific discovery as a pre-determined path to the future. Each milestone represents a point of inquiry, and an opportunity to imagine and contest the tools, values, and systems we want to create for the next generation.