Birdwatching Really Is for Everyone | Bitch Media 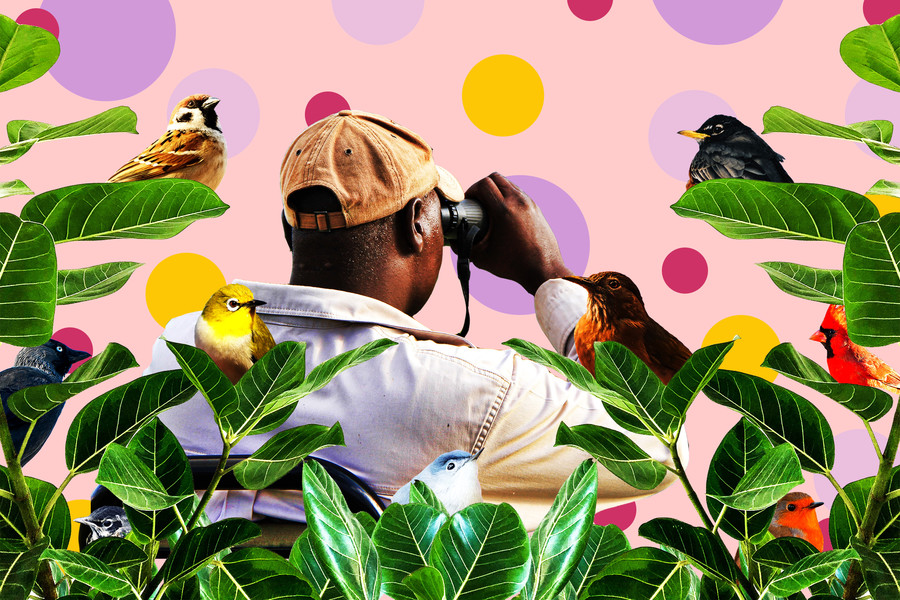 “The official word for an African American in cryptic clothing—camo or otherwise— is incognegro. You are a rare bird, easy to see but invisible just the same.” So begins “9 Rules For The Black Birdwatcher,” J. Drew Lanham’s 2013 viral essay in Orion magazine, which brought great attention to the growing community of Black birders, and more broadly, Black, Indigenous, and other birders of color, surprising white folks in the outdoors world as much as it did urban-dwelling BIPOC. “But isn’t that shit white people do?” is a familiar refrain for outdoor enthusiasts of color, though they’ve worked for decades to encourage their kindred to venture out, break down the barriers of entry for almost entirely white nature institutions, and establish greater representation for folks of color in ornithology. But now, in the golden age of social media, these outdoor enthusiasts might be hearing this question less and less.

Over the past decade, there’s been a huge shift in the great white world of the outdoors, with people of color taking up more space within it than ever. From queer BIPOC park rangers using the #Parks4All hashtag on Instagram to several web series springing up about Black communities and the outdoors, it seems, from the outside looking in, like an exciting time to be a brown face in a historically white space. Though I’m a lover of the natural world, I’m no birdwatcher, so I looked to those in the field of birding to answer these questions: What has changed, and what still needs to?

In 2008, wildlife biologist and ornithologist John C. Robinson published Birding for Everyone: Encouraging People of Color to Become Birdwatchers, sharing the data he’d collected to better identify why there was such a lack of diversity in the birding world (alongside practical tips like how to identify birds by song). “Diversity within the birding community itself has been a long time coming,” Robinson wrote in the introduction to his book. “I have been actively birding since I was 6 years old, but I was in my 20s before it began to dawn on me that that the birders I met all seemed to be cut from the same white cloth.” In 2011, middle-school teacher Dave Magpiong and others organized the inaugural Focus on Diversity: Changing the Face of American Birding Conference in Texas, which continued until 2013.

Following the popularity of J. Drew Lanham’s “9 Rules” article, he published The Home Place: Memoirs of a Colored Man’s Love Affair with Nature in 2016, a gorgeous look into his family’s legacy of land stewardship in South Carolina and, ultimately, a poetic study on what it means to share community with nature. It’s one of many titles that confirm that the relationship that BIPOC have with the outdoors is nothing new. “Birds and other wildlife are all around us even in the heart of the most concrete of jungles,” wrote Dave Lindo in last year’s release, How to Be an Urban Birder, the first urban guide to birdwatching. “You just have to look up!” Lindo drew from his experiences in just walking around the busiest streets of London with a pair of binoculars in hand and now leads urban birding tours and courses internationally.

It’s a read that environmental educator Tiffany Adams enjoys, and a notion that she embraces—birding may well be one of the most accessible wildlife-related past times, she says, telling the Seattle Audobon that, “Birds are everywhere; therefore, birding is for everyone.” A born-and-raised New Yorker, Adams told YES! magazine earlier this year that “not too many people saw the value of birding in the projects,” in the Manhattan neighborhood of Chelsea, where she grew up. “But when they’re migrating, birds don’t say, ‘Oh no, those are the projects, I’m going to go to Central Park.’”

All these folks, along with their books, efforts, and organizations, have laid the groundwork for a new generation of diverse wildlife-lovers who are coming into an established community while still contending with the whiteness of the field. Wild Diversity, a Portland-based organization, “focuses on reinvesting in community knowledge expansion in stewardship, outdoor education programming, and skillshare centering Black, Indigenous People of Color (BIPOC) and LGBTQ+ communities through decolonized stewardship,” as described on their website. They lead birding excursions around Mt. Hood exclusively for BIPOC and/or queer and trans folks. In New York City, the first Feminist Bird Club chapter was founded in 2016, aiming to promote intersectionality within the birdwatching community. Through their work, they’ve raised funds for the Movement for Black Lives and the New York Abortion Access Fund, and have since branched out to Chicago, Boston, Buenos Aires, and other cities.

From books to social media to IRL meetups, and now TV, BIPOC birders are using varied mediums to get their communities outside.

Francis Mendoza, a Filipinx ranger with the East Bay Regional Parks District in California, uses Instagram to speak about environmental justice and to increase visibility of brown folks in leadership positions at organizations that involve the outdoors. “Despite this long storied history of [Filipinxs] working and being outdoors, I never saw our version of connecting to the outdoors represented anywhere on TV, movies or newspapers,” he wrote on the website Bay Nature earlier this year. He also professed that after decades of work within this industry, he’s finally begun to see a plethora of cultural diversity of all kinds in the natural spaces of the East Bay.

From books to social media to IRL meetups, and now TV, BIPOC birders are using varied mediums to get their communities outside. In Birds of North America, Bronx-raised host Jason Ward travels around the country, from Chicago to Ohio to Los Angeles, to birdwatch with Wyatt Cenac, Jonathan Franzen, and other famous folks. Having known birders to wake up at the break of dawn to catch wildlife in flight, I’ve given this pastime a hard pass, but while watching this series, I’ve found myself thinking, is birdwatching…cool? Unfortunately, the show met some conflict when Rolling Stone premiered Birding with Charles just months later, a semi-ironic take on nature shows that’s very similar to Birds of North America—except that Ward and other Black folks believe it plays into stereotypes, and even pokes fun at Ward’s project.

Hosted by Rolling Stone staff writer Charles Holmes, Birding with Charles is a web series has him taking celebrities and musicians on short excursions that come off as more entertaining than educational. No matter how you look at it, BIPOC remain minorities in the ornithological sphere, and I wonder if J. Drew Lanham’s words in 9 Rules, written just a few years ago, still hold the same weight: “There’s talk and posturing about diversifying the hobby, but the money is not where the mouths are. People buy binoculars that would fund the economy of a small Caribbean island—where, coincidentally, lots of neotropical migratory birds winter, and where local people of color might contribute to their conservation if more birders cared about more than counting birds.”

Glancing at the list of benefactors funding projects like Wild Diversity and other efforts to diversify the outdoors, it does seem like mainstream white institutions are beginning to put their money where their mouths are, but only after years of inside labor performed by BIPOC. It’s not enough, not yet, but what this community of birdwatchers have proven, along with the wider outdoors world of changemakers of color, is that there are enough of them that adventurers of color can look toward their own communities for support rather than having to engage with the whiteness of that world. The white European settlers knew what they were doing when they attempted to conquer the land of Turtle Island, forcing out Native Americans and forcing enslaved Africans to work the earth, thus introducing a fraught relationship to nature where there once existed a respectful exchange. But there have always been those BIPOC sowing seeds of resistance to the dominant narrative, and we may now be in the midst of a harvest.