Bisexual Erasure in Grace and Frankie 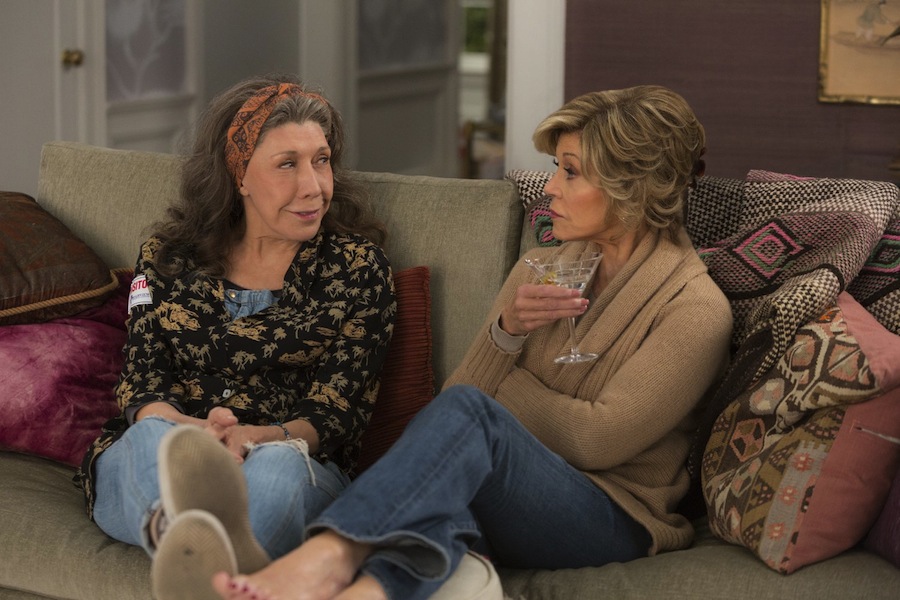 This article contains plot details for both seasons of Grace and Frankie.

Netflix show Grace and Frankie does a lot of things well: It centers on two older women, played by Jane Fonda and Lily Tomlin, whose characters are frank and complex. But the show bothers me for one big reason: It completely ignores bisexuality.

In Grace and Frankie’s pilot episode, the show’s namesakes discover that their husbands have been cheating on them for years—with each other. While this is a fresh approach to the straying-spouse storyline, no one ever asks, “Hey, Robert and Sol, are you into women and men?” Instead, everyone jumps from straight to gay. When the two men admit that they’re in love, Frankie counters with, “You mean you’re gay? And this is who you’re gay with?” Robert responds, “This is who I’m in love with.” The possibility of the men feeling romantic love for each other and for their wives is never brought up. 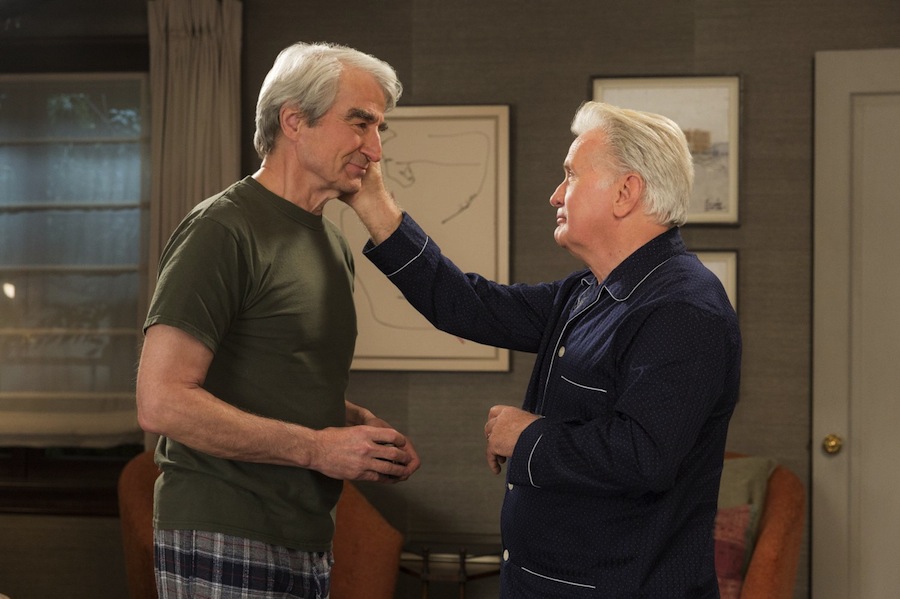 Marta Kauffman and Howard J. Morris, the show’s creators, completely ignore that Robert and Sol could be sexually interested in both men and women. It's like Grace and Frankie is playing a giant game of Password, and “bisexual” is the word that cannot be spoken. Throughout two seasons and 26 episodes, bisexuality is not referred to once. Even when (spoiler) Sol and Frankie sleep together again in an emotional moment, it’s assumed that Sol only did so because he felt bittersweet about his family coming apart, not because he felt a deep attraction to Frankie.

Read This Next: The Questioning Continuum: Seeking Sexuality as a Lifelong Practice
Read This Next: As a Biracial Woman, It's Powerful to See “The Mindy Project” Explore Identity

This erasure doesn’t just happen in Grace and Frankie, it happens all the time in our pop culture. Bisexual characters are rarely portrayed in TV and movies and this underrepresentation contributes to the bias against bisexual people. “They are less likely than their gay and lesbian peers to be out to the people they love, because their identity is constantly misconstrued as either a form of confusion, a lie, or a contrived and hypersexualized means to an end,” says Alexandra Bolles, a media strategist at GLAAD and bisexual advocate. “Perpetuating these tropes undermines the truth that bisexuality is real and that bi people deserve to be treated equally and fairly.”

Bisexuality gets such a bad rap that, according to a 2013 report by the PEW Research Center, 72 percent of people who identify as bisexual are not open about it to the most important people in their lives.  According to GLAAD’s 2015 Where We Are On TV report, there are 59 regular and recurring LGBT characters on shows created and owned by Amazon, Netflix, and Hulu. Of this group, nine are bisexual women and only three are bisexual men. The same trend maps onto cable shows: Out of the 271 regular and recurring LGBT characters on scripted broadcast, cable, and streaming programming, 53 women and 23 men identify as bisexual.

Grace and Frankie could be forward-thinking even if the characters just discussed the possibility that Sol and Robert could be bisexual. Currently, it’s more socially acceptable for women to be sexually fluid than men—at least in a sexual context. As Shiri Eisner writes in Bi: Notes for a Bisexual Revolution, “Rather than accepted, female bisexuality is ‘encouraged’ on the sole grounds that it be palatable to straight men. Bisexual women are presented in hypersexualized contexts…while also reassuring us that these women are not really bisexual, but are simply behaving so far for the satisfaction of the presumed male spectator.” Yet male-identifying bisexual folks are rarely seen, even in a sexualized manner. As a result, out of the hundreds—if not thousands—of characters on TV and online, only 26 are bisexual men.

It could be argued that bisexuality isn’t addressed on Grace and Frankie because it’s hard for writers to grasp. After all, in a 2013 PEW Research Survey, about half of gay men and lesbians said that sexual orientation is extremely or very important to their overall identity; only two in 10 bisexual men and women said the same. As culture writer Holly Eagleson argues, since bisexual characters lives aren’t often as strongly defined by their sexualities, it’s harder for audiences to understand them. Consequently, shows need to spend more time exploring the characters, which could be risky financially.

“Media, like so many other aspects of society, clings to simplistic and inaccurate binaries,” says sex educator and author Al Vernacchio. “The defining element of bisexuality isn't something visible or easily shown. How do you portray a person or a couple as bisexual without leaping to silly or offensive portrayals? TV and film are visual media. What does bisexuality look like?”

Yet even when bi men are portrayed on screen, the characters are often stereotypes. Bisexual characters are represented frequently as untrustworthy people who are prone to infidelity, who can’t form genuine relationships, and who engage in self-destructive behavior. GLAAD’s report cites Cyrus Henstridge on E!’s The Royals, who seduces a member of Parliament and then blackmails him. Tyrell from USA’s Mr. Robot sleeps with a male office assistant so he can install spyware on the man’s phone. Finally, Chamberlain Milus Corbett from FX’s The Bastard Executioner uses sex as a tool to get what he wants.

In less dramatic shows, bi characters are still portrayed in a negative light, or their sexuality is ignored. When Larry's parents discover that Piper used to date a woman in Orange Is The New Black, the word “bisexual” is never used. Instead, Piper says, “I used to be a lesbian. Now I’m not.” On Grey's Anatomy, Callie was only deemed bisexual in the last few seasons. Before that point, she was labeled as gay or confused.

“The way gay and lesbian people navigated greater societal acceptance was by coming out,” Vernacchio says. “The problem with bisexual people isn't that they can't or don't come out, it's that too many straight and gay/lesbian people refuse to acknowledge the reality of their existence, even when it's made abundantly clear by bisexual people themselves.” This problem is worsened by the fact that bisexual characters are rarely portrayed on TV, and when they are, they are shown in a negative light. In the future, let’s hope that Netflix, a company that has the freedom to be as progressive as it wants, will be inclusive of different sexual orientations—especially bisexuality.

Read This Next: The Questioning Continuum: Seeking Sexuality as a Lifelong Practice
Read This Next: As a Biracial Woman, It's Powerful to See “The Mindy Project” Explore Identity 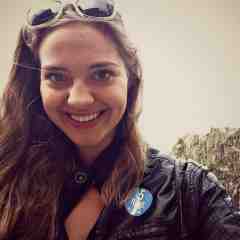 Jillian is a comedian and freelance journalist. She has been published in Salon, Marie Claire, PBS Mediashift, The New York Observer, The New York Post, Quartz, The Establishment, and more. If you shout her name three times, she’ll appear in your mirror. Stalk her on Twitter @thatJillian or send a digital carrier pigeon to thatJillian@gmail.com.

I love the analysis in this piece, but the details of the spoiler are a little mixed up. It's Frankie and Sol that end up sleeping together, not Frankie and Robert. I would've liked to see how the writers made that alternate version work!

Very nice article. One thing that I would is that this piece itself dances around a word that seems unavoidable as part of the topic: "monogamy". The sense is that as long as one is mono-sexual, many people can still cling to a mythology that there is a single "one and only" for everyone in the world, with whom they are meant to be monogamous. Bisexuality seems to more necessarily shatter that myth, in that there have to be at least two people in the world to whom one is attracted. So in this way bisexuality is an even greater challenge to standard societal beliefs than homosexuality.