The “Bitch Doctrine” Is the Uplifting Manifesto We Need | Bitch Media

The “Bitch Doctrine” Is the Uplifting Manifesto We Need

The day before picking up Bitch Doctrine, Laurie Penny’s new collection of essays, I finished reading The Mother of All Questions, Rebecca Solnit’s latest collection. A Venn diagram of the subjects covered in both books could almost be a single circle: rape culture, toxic masculinity, Bill Cosby, the imminent end of patriarchy and its rather ghastly death throes, the gender binary and what an uncomfortable corset it can be. Both even tackle that batshit CDC campaign that suggested women avoid a second glass of chardonnay because it could lead to pregnancy or “violence” (presumably at the hands of gremlins, because men are never once mentioned). Where Solnit’s approach pulls in many strands of thought and analysis and reads them as one might parse tea leaves, Penny’s writing hits like a triple shot of Lavazza on an empty stomach. It’s bracing and a little jittery and very good.

Identifying as genderqueer but female with “she/they” pronouns, Penny describes getting used to the internet rite of passage that is death and/or rape threats to any woman with a public voice, but feeling genuine contrition when she’s rightly called out for using trans-appropriative language. She’s clear about her advantages in life (among them being young, middle-class, white, and well-educated), but keeps redirecting focus to issues beyond her own demographic, noting that for so many who are resistant to the burgeoning changes of the moment, “(W)hen you’ve been used to privilege, equality feels like prejudice.”

Chapters are made up of short sections that come together like pie wedges to form a whole. In “Culture,” Penny notes that Nellie Bly’s courageous journalism could not earn her the same recognition that being a “lonely orphan girl made good” did; examines the failings of white imperialist masculinity as embodied by James Bond; and follows the current, practically legal requirement that any print media include a think piece on Girls (though this one manages to find a unique take on the show). Penny seems able to empathize with those at whom she directs her strongest critiques, like Gamergate bros who have hounded women out of internet and public spaces in part because they have long felt like bullied losers. She’s not letting them off the hook for a second, but instead trying to understand their reasoning. If you’re feeling scattered and exhausted by recent news, Bitch Doctrine has a galvanizing effect; read it to shore up your talking points and reaffirm your commitment to the fight for progress.

Relevant: The Future is Feminist Joy 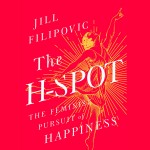 by Allison Mccarthy
The H-Spot: The Feminist Pursuit of Happiness reveals the blueprint to happier lives.