When the Chips Are DownAnaïs Mitchell Goes Straight to Hades 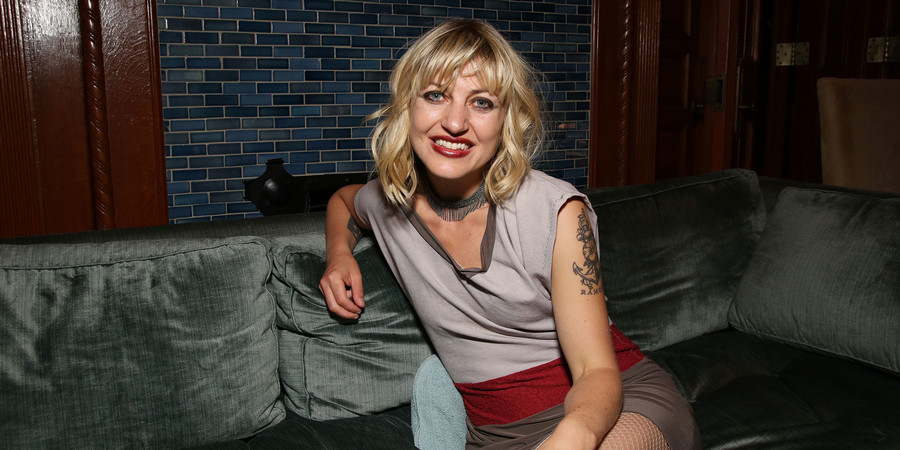 “The enemy is poverty/ And the wall keeps out the enemy/ And we build the wall to keep us free/ That’s why we build a wall/ We build a wall to keep us free,” bellows the grave chorus of Hadestown, the postapocalyptic folk opera released by Righteous Babe Records in March 2009. Based on the myth of Orpheus, the album re-creates the underworld as the final reprieve from a destitute U.S. economy, but the false security of the underworld has a price—loss of contact with the corporeal earth. Hadestown is the brainchild of musician and writer Anaïs Mitchell, whose first release on Ani DiFranco’s label was The Brightness (2007). Prior to signing with Righteous Babe Records, the Vermont native traveled throughout the Middle East and Latin America, studying language and politics, and recorded The Song They Sang When Rome Fell (2002) and Hymns for the Exiled (2004).

Alongside Mitchell as Eurydice, Hadestown features Justin Vernon as Orpheus and DiFranco as Persephone, who runs a speakeasy and bootlegs remnants of the natural world. The record follows in the tradition of political operas like Pink Floyd’s The Wall and Green Day’s American Idiot, but also includes a subplot of ill-fated romance similar to The Decemberists’ 2009 folk opera, The Hazards of Love. Bitch recently spoke with Mitchell about the uncanny insight of her lyrics and her resonant opera.

Many artists have been intrigued by the Greek myth of Orpheus—the story of a powerful musician who moves inanimate objects with his songs. Hadestown takes a strikingly fresh spin on the myth. In your portrayal, the underworld is a walled-off, authoritarian realm that leaves those who dwell aboveground facing food scarcity and privation. What inspired you to retell the myth in this setting?

When I started writing Hadestown, a couple of songs came out of me from nowhere and they pointed to this tale. The beautiful film Black Orpheus, which retells the myth in Rio, where the underworld is a bureaucracy, also inspired me. In that depiction there’s one scene with a janitor sweeping up the identity papers of missing persons in a building that looks like a monolithic Death Star; I was struck by the idea of a faceless bureaucracy. That encouraged [me to set] Hadestown in a futuristic U.S. depression.

In the original story, Orpheus’s wife, Eurydice, is bitten by a serpent and sent to the underworld, but in Hadestown she is tempted by the security Hades offers. Why the change?

[In the original myth] Eurydice dies without agency, but in Hadestown she chooses the underworld and deals with the repercussions. There’s something about mixed metaphors that allows you to stumble on unexpectedly rich ideas. [In the opera] Eurydice sings, “I trembled when he laid me out,” so she does succumb and there is an element of death, but it was important that she made the decision—that it didn’t just happen to her.

The opera seems be a folk/jazz hybrid. How would you describe the sound?

I wrote all the songs on my guitar—lyric-heavy, with lots of fingerpicking. I knew from the beginning that I wanted my friend Michael Chorney (formerly of the band Magic City) to help with the score, and he shaped it, so what would have been a folk song took on another color. When I was writing the songs, I wanted them to be interesting enough melodically that Michael would have fun scoring it. The guitar is so skeletal, and so I picked some melodies note by note. We were influenced by Bertolt Brecht and Kurt Weill’s The Threepenny Opera, which is awesome because it is folksy, vaudevillian, and gritty. I had in mind the voices of my friends in Vermont, who ended up being the original cast. Later, as motivation for the album, I kept the voices of Ani DiFranco and Justin Vernon in mind as well.

Is there a specific character you identify with in the opera?

It was very natural to sing as Eurydice because she is young, impressionable, and emotional, which suits my voice. But I feel elements of all of the characters: I have days where I have a Persephone moment, and of course as a singer and songwriter, I feel for Orpheus. In a funny way, it was easiest to write Hades’s songs because he knows what he wants and what he’s trying to do.

What do you hope Hadestown will evoke in listeners?

Myths are so powerful in so many unexpected ways.They are rabbit holes where the echoes of human stories bounce around. I can’t control the way this story resonates with people, but I know it will, because myths come out of the ground of human experience. First and foremost, I hope people have an emotional response. I know there’s a lot for the mind to digest, but the power of music will move people, and their hearts will feel for the characters. The anthem of Hadestown is “Why We Built the Wall.” It is meant to pose the question: When people are in desperate situations, such as the horrific logical conclusion of global warming—and these conditions do exist now—who among us is not going to be behind the wall when the hungry are at the door?

When the chips are down, are people going to turn others away? Hadestown pays homage to the Batman/Joker struggle; Batman believes people have compassion, and the Joker is certain they will turn against each other. So there is a political undercurrent, but I would rather raise questions than provide answers. That’s what stories are about: asking questions and having people feel them with their hearts.

Read this Next: B-Sides: Q&A with Ana