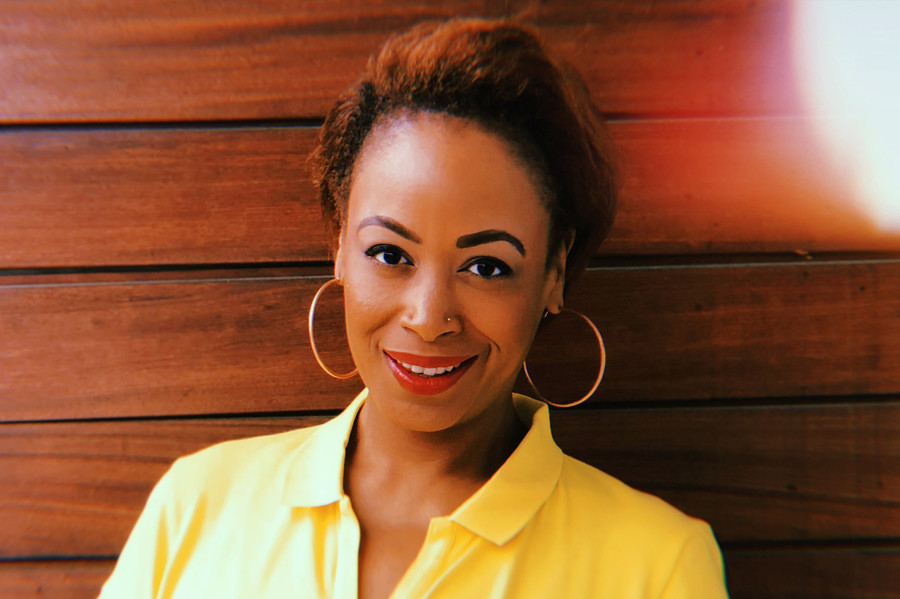 Feminista Jones, author of Reclaiming Our Space: How Black Feminists Are Changing the World from the Tweets to the Streets (Photo courtesy of Feminista Jones/HUJI Cam)

This article was originally published on January 29, 2019.

I’ve known Feminista Jones, author of Reclaiming Our Space: How Black Feminists Are Changing the World from the Tweets, since we were in junior high school, and I’ve proudly watched her use social media and blogging to coordinate one important moment after another. In 2014, she organized the National Moment of Silence (#NMOS14) after a police officer fatally shot Michael Brown Jr. and created the #YouOKSis movement to raise awareness about street harassment. Women comprise the majority of social-media users, so it’s no surprise that Black women have leveraged Twitter to do everything from pressuring Bill Haslam to grant clemency to Cyntoia Brown to launching the #MuteRKelly campaign. The platform has become an alternative way for grassroots activists to communicate and create change.

“‘It’s just Twitter’ is a refrain often tweeted by people who insist that they don’t take much of what they read on Twitter seriously. For them, Twitter is simply another social media platform they can log onto, browse a few tweets and trends, and check up on their favorite celebrities’ latest antics before logging off and going on about their lives,” Jones wrote in a July 2013 Salon article. “For others, though, particularly for people of color, Twitter has become one of the most important tools of modern sociopolitical activism, a powerful force in the Zimmerman trial aftermath and beyond.”

While a lot of nonsense is shared on social media, especially in the wake of 45’s election, Reclaiming Our Space is a reminder that Black feminists have been using Twitter and Facebook to build offline movements. The book chronicles Jones’s life as a queer Black feminist community activist, public speaker, and social worker who believes that “Black feminism is the key to Black liberation.” By documenting her Black feminist journey, Jones pays homage to Sojourner Truth, Anna Julia Cooper, and Angela Davis, and gives credit to current scholars, such as Meredith Clark, the first woman to study Black Twitter. Reclaiming Space also offers an enriching history of hashtags, like Knob-Slobbing Feminism (#KSFem) and Mikki Kendall’s #SolidarityisforWhiteWomen, to show how Black women have moved from the margins of popular culture discourse to the center.

“[Reclaiming Our Space] is a documentation I think is important,” Jones says. “It just so happens that a lot of the people I write about are my peers and friends. I wrote it so that 100 years from now, when people are wondering what Black women were doing during the Trump era, they can look back and see. This book is a placeholder in history so these women are not forgotten.”

I was struck by how vulnerable and candid you are about your divorce and other personal things. Why did you decide to include so many anecdotes in the book?

It was important to share my journey because I have a lot of younger women looking up to me who don’t know how long I’ve been doing this work. I [started] my first major blog in 2004, so there [hasn’t been] overnight [success]. It’s been a mental and writing evolution. I also wanted to show that pain can be a purposeful catalyst for things. You can turn [your pain] into [a purpose] that helps others.

You write about how long it took you to bring different parts of your identity to your work. Why was that a process? You also spell out how social media can be beneficial, but there’s often a lack of context. So folks might see that you have thousands of followers and think, “Oh, she came out of nowhere.”

I say all the time, “Just because you’re new to me doesn’t mean I’m new to this.” The first thing [I decided] was what I wanted to talk about. I had to decide what my lane would be. One of the panels I did for BlogHer was about being a Black feminist, BDSM, sex-positive kinkster. Like, no one else is really doing that! (Laughs.) When you become an expert, in part because you are the only one, or you’re one of the only ones, you get invited to things [that gain] you exposure. If someone hears you talking about hip hop, then they will invite you to talk about that. I realized that focusing on particular parts of my identity got me more access than being a Jane-of-all-trades. But I am a Jane-of-all-trades because I’ve had all of these intersectional experiences, so I worked on making these different parts of me come together.

The academy has to embrace Black sexuality. The academy has resources, legitimacy, and the ability to put a stamp on things that says “this is true” in a way that [people outside of academia] don’t. Unfortunately, our bodies have been pathologized and viewed so negatively; it’s always about abuse, harm, and pain. The easiest way for people to express power over women’s sexuality is to shame them by calling them sluts. But the shift I’m seeing is that women don’t care as much, and of course, that moves the needle.

Can you say more about Black feminism serving as protection and as a guide. What does that look like for you day to day?

Black feminism is a theoretical framework and practice, of course, but I also think it’s a way of life. If we were to create a guide—what is it that we’re already living—[then we have to ask] what are we already doing? I try to get people to think about the things they do in their everyday practice and relate it back to feminism. That’s why you can get free birth control, [and] why you can get an abortion. We are meeting people where they are. Black feminism is important as we think about cultivating self-love, identifying love individually, and the way [love] serves us. Black feminism convinces us to define love and value in ourselves. 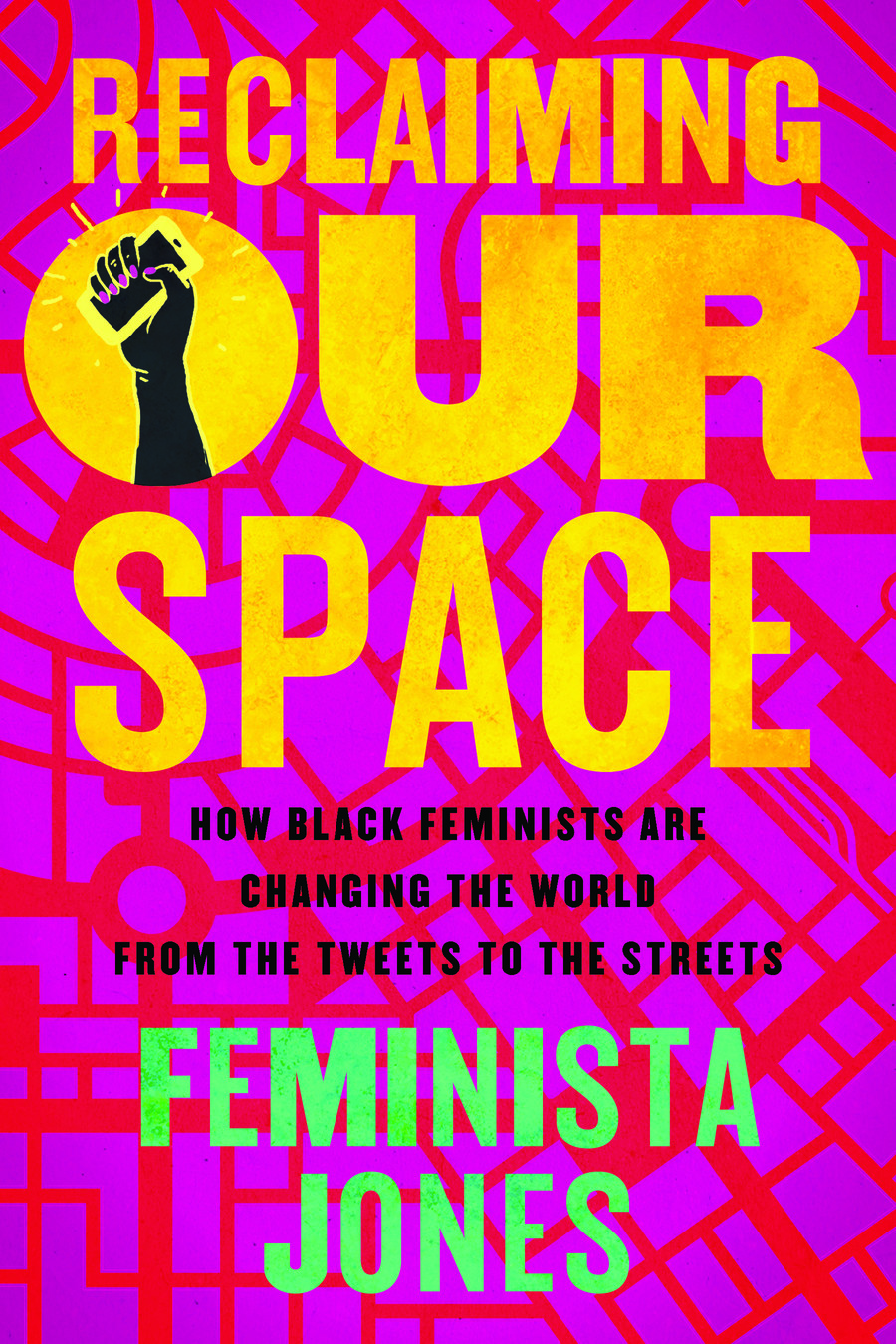 Reclaiming Our Space: How Black Feminists Are Changing the World from the Tweets to the Streets by Feminista Jones (Beacon Press)

Let’s talk about your critique of problematic white women feminists. You write, “Their privilege as white people often gets in the way of their ability to be truly intersectional in their feminist praxis, because clinging to their whiteness, if it means lessening their suffering, is just too tempting to pass up.” What are these women missing?

The more money you have, the more access you have to the spoils of capitalism. You become isolated, so you’re not receiving new information or absorbing the transitions the world around you [is undergoing]. I kind of give [Emma Watson] credit for listening when people push back. What are they getting wrong? Lena Dunham—she’s racist. I don’t want to say there’s an absolute racism, but it’s almost inherent. But feminism by definition doesn’t make room for white supremacy or racism. You are a white woman saying positive things about women, but you are not a feminist. We can all have ideas about our lived experiences, but you can’t claim [you’re] a feminist if you haven’t read feminist theory. I want to know who Tina Fey, Dunham, and Watson have read.

Knowing what we know now about how Russian bots have infiltrated Twitter and Facebook, how can Black women reclaim space on these platforms ahead of the 2020 presidential election?

The book’s title, Reclaiming Our Space, pays homage to Maxine Waters reclaiming her time. I think that’s really important. I’m not waiting to be chosen or to be selected; I’m going after this. As we go into 2020, we’re going to see more resources being directed toward Black women. I think we’re going to see and hear more of the “listen to Black women” bullshit. But do people hear Black women? Do they hear us when we say what we want to happen in our communities? If you’re not meeting us there, [then] we may not support you. Maybe we’ll see Black women finally saying to Democrats, “I may not support you. Come get this vote. I know you’re used to it, but you may have to work for it.”

Read this Next: Sister Soldiers

by Tasha Fierce
Unless you’re looking for their names, you won’t find the stories of all Black women shot and killed by police officers in the past five years in the discourse surrounding police reform.