Culturesportsbaseballbitch interviewa league of their own 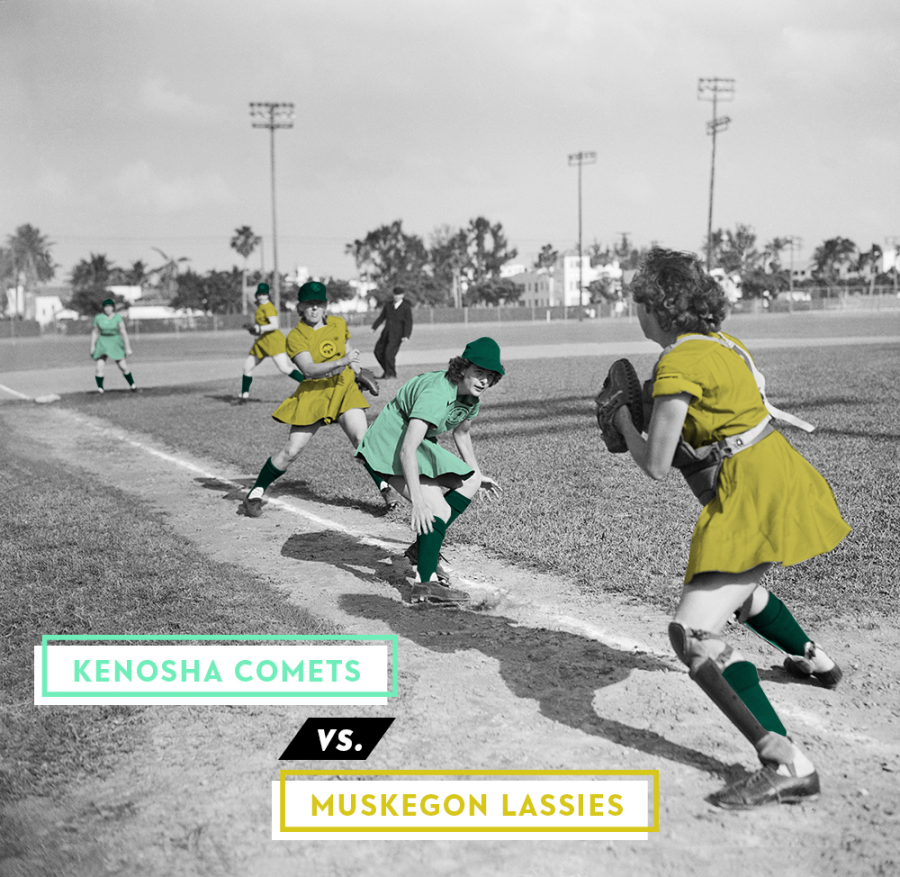 Kenosha 'Comets' play the Muskegon 'Lassies' in Miami, during Spring Championship play. Left to right are Dorothy Naum, 'Lassie' for third base, as she chases Helen Fibraski, of the 'Comets'. Lassie catcher Charlene Pryer blocks the plate. (Getty Images)

The All-American Girls Professional Baseball League was made famous by the 1992 movie A League of Their Own, starring Geena Davis, Lori Petty, and Madonna. The baseball league existed from 1943 until 1954, beginning during World War II when most of the men were deployed. The league was started by Philip K. Wrigley—of bubble gum fame, yes, but also the owner of the Chicago Cubs. Wrigley worried that the war, besides endangering the lives of U.S. troops, was also likely to endanger America’s favorite sport. Wrigley urged women to join the AAGPBL as a an act of patriotism that would boost national morale and aid the war effort, and was among the industry leaders who encouraged (white) women to come out and fill jobs vacated by the men serving their country overseas. Many women worked in the factories; others flocked to the ball field.

The AAGPBL began with four teams, all based in the Midwest, and eventually expanded to include as many as 10 teams at a time. In its inaugural season in 1943, the Wisconsin-based Kenosha Comets team saw 60,000 people attend their home games. League-wide attendance for that season’s 108 games reached 176,000, writes Lois Browne in her book Girls of Summer: In Their Own League. In its heyday in 1948, almost a million fans headed to the ballpark to watch the women play. By the league’s end in the early 1950s, some teams were still drawing decent attendance, particularly given the size of their population base. But overall, attendance dwindled and, eventually, the AAGPBL folded.

This year marks the 75th anniversary of the league; to commemorate the occasion, Bitch Media interviewed Jean Buckley, a center fielder who played three seasons in the AAGPBL. Buckley joined the league at a time when it was trying desperately to bring in new blood and regain the excitement and enthusiasm that had followed the teams in their early years. She spent the 1950 and 1951 seasons with the Comets, and played her final season with the Rockford Peaches.

Buckley, who is now 86, resides in Fortuna, California. She is originally from the Dorchester neighborhood of Boston, Massachusetts, and, despite being in California since 1954, she has maintained her regional accent. This conversation has been lightly edited for length and clarity.

Did you grow up playing baseball?
No. We just had the [Catholic Youth Organization]. Typical Boston. Had the CYO, Boston Parks Department. There was always the separation of the women and the men’s sports, which is fine. Women’s basketball, you couldn’t play the whole court. You just played half court in those days. That was also no sliding and stealing in softball. Just certain restrictions… There was not the training [for the girls]. Nobody learned to really how to throw a curveball or hit a ball. You didn’t play with your brothers. You didn’t play with your father. Women, girls, did not play with the boys. 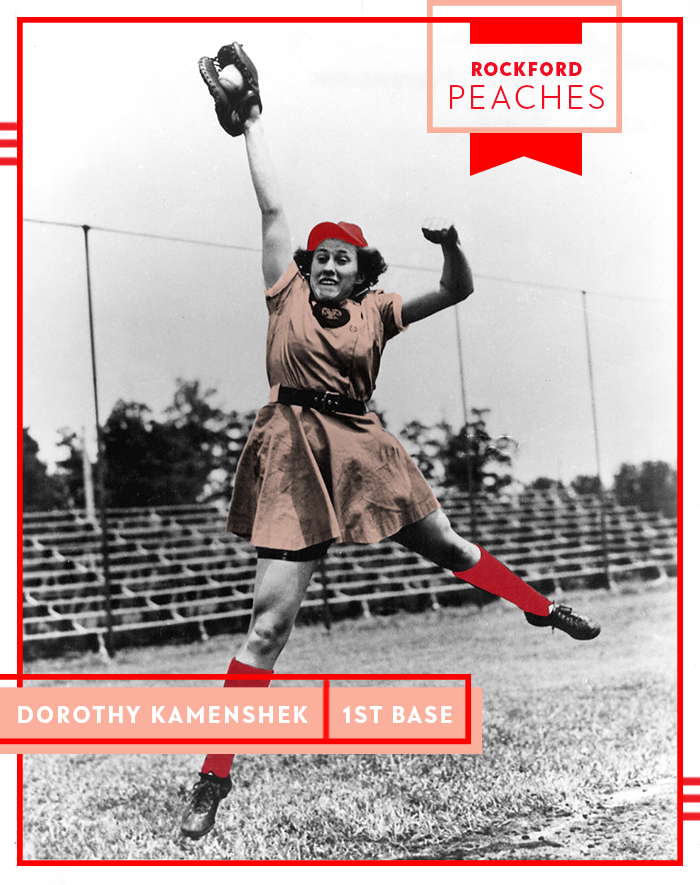 How did you end up playing for the All American Girls League?

Well, it just so happened that Mary Pratt [who was from Quincy, Mass.] played for them. She played [until 1947]. She’s an underhanded, left handed pitcher. She played for them and she was coaching the Quincy Raiderettes [an amatuer fastpitch softball team]. In 1950, I went to play with the Raiderettes and she said to all of us, “You know, they’re gonna have tryouts in Everett, Mass. at the gymnasium for the league.” [It was at] two o’clock in the afternoon. I was working and I turned my ankle and told them I had to go to the doctor. And over I went.

It was just like in the movie. Must have been 500 women in this gymnasium. Snowing outside. And all they did was say, “Okay. Take this ball.” Gave us all a ball. “And throw this ball.”  I never threw a baseball in my life. I only threw a softball. And I looked next to me and this girl was using two fingers instead of three. And I said, “Oh.” So, I used two fingers instead of three. I knew nothing about baseball. Then they had this relay. They pitched to us in the gym. I remember balls banging off the walls and the windows.

Like the scene with Marla Hooch trying out in the gym in A League of Their Own, where she was hitting baseballs out of the windows!

Yes. Then they had a lottery and said, “You want to come try out in South Bend, Indiana?” And they sent a train ticket. We picked up different people at every stop from South Station [in Boston] on. They must have had 300 or 400 girls in the hotel and the bus. They gave us a chaperone and they gave us free meal tickets. This was 1950, the [league’s] last hurrah. The league was changing: Television had come in. The war was over. They didn’t know if the league could last.

At the tryouts, somebody would knock the ball and run around and slide. Then they’d just cut [people] every night. Cut, cut, cut. Of course we went and cried at everybody at the train station as they’re leaving. Finally, [Kenosha Comets manager] Johnny Gottselig—who really wasn’t a baseball guy, he was a Blackhawk hockey player from Canada—took me aside with maybe four or five buckets of balls. I only had three-dollar spikes and the cotton was falling out of my softball glove. Oh, the whole thing was a mess. I hit all those balls and finally I just collapsed and said, “That’s it. I’m dead. I can’t do any more.” He said, “[Let’s] get you to center field on the Kenosha Comets.” I couldn’t believe it.

That’s what I remember: the love, the acceptance. We all lived in somebody’s home with the kids, with the family.

I didn’t know that the veteran [players] hated the fact that the rookies were playing. The league made them play one rookie a game. There was no love lost for me in center field. You didn’t get backed up by the left field or the right fielder.  I didn’t realize what was going on with the dissention and that sort of thing. It was a mess. It was an emotional mess.

At this time, as you said, the league was coming to an end. Attendance was dwindling and people didn’t know how much longer the AAGPBL would last. Did your experience with your teammates change the next year, when you were no longer a rookie? Were they more welcoming?

No, it was the same thing. But then, as I said, you could see the deterioration. Less and less people coming to the games. The league was falling apart. We were left at the end of ‘51 and got the letter [that] said we were no longer Kenosha Comets. I mean, they just dissolved it.

[But] then [Rockford Peaches manager] Bill Allington sent a letter and asked, “Would you want to [come to Rockford]?” So I said, “Oh. He’s a baseball guy. I should go learn something, and see if I could hit a curveball.”

Could you hit a curveball?

[Laughs] No. Nope, never. Because what happens is on a curveball, you bail out. You got to stay in the box. I would back out. It would go right over the plate.

You were saying that you had softball experience but not baseball experience, and then after playing baseball, you liked it better? 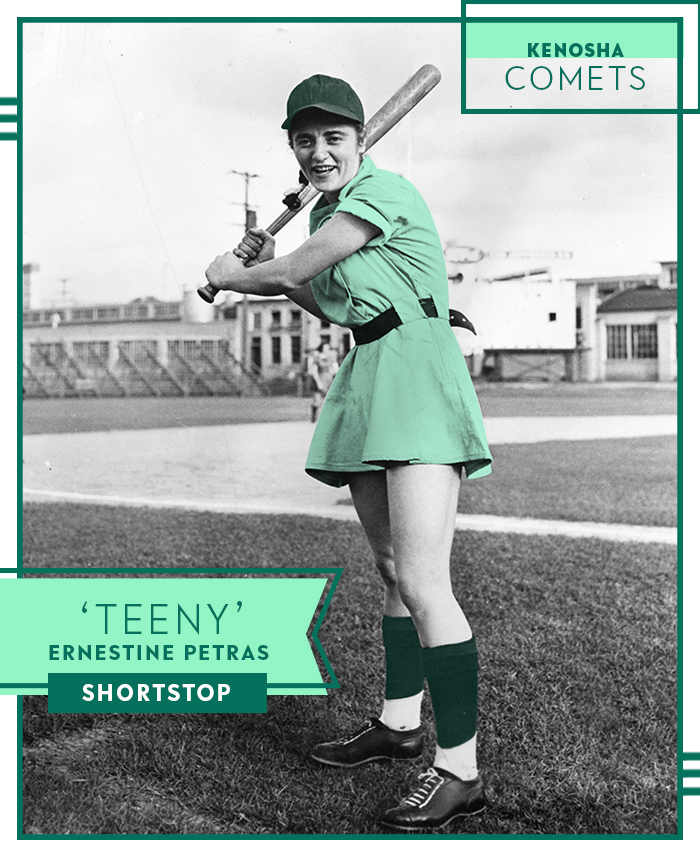 Ernestine "Teeny" Petras of the Kenosha Comets poses for an on-field portrait in 1949. Photo by Mark Rucker/Transcendental Graphics/Getty Images.

In the 1990s, there was an attempt to revive the spirit of the AAGPBL with the Colorado Silver Bullets, the women’s professional baseball team who played four seasons. As you know, once girls get to a certain age, most of them get funneled into softball. But there’s been a really big push to try to keep girls in baseball and get enthusiasm around the baseball. What do you think about those efforts?

Well, I don’t know if you’re going to do it because they started off wrong. The Silver Bullets, they said they wanted to go play the boys. You can’t play the boys. That’s the name of the game. And they went up and were dismantled by every boys team, even down to the high school. [Note: The Silver Bullets had a losing record for their first three seasons and a winning record in their fourth and final season.] That’s [where] they made the biggest mistake. They decided they could play with the boys and they couldn’t. That’s all there is to it. I never wanted to compete with the boys. I’d compete with the best girls, whether it’s soccer or baseball or basketball. You think I went against—what’s his name, 6’8”, 285 pounds—in basketball? No.

What are some of your best memories of your time in the league?

It was just a unique thing. The best memory was really all the Midwest. I came from New England. I love New England. But the Midwest: open, warm. More acceptance than by anybody in New England; they’re cold fishes. That’s what I remember: the love, the acceptance. We all lived in somebody’s home with the kids, with the family. There was a family day at the park. I don’t think the league would ever, ever, ever have existed if it wasn’t in the Midwest.

What did you do after you stopped playing?

When I came back [to Boston] at the end of ‘53, my family was getting ready to take off to California. I left Boston and have never been back other than visits and so forth. Well, we got out to California and… I said, “Oh, let me see. San Francisco State is $25 a semester.” $25 a semester to go to San Francisco State. Off I went. I put myself through. I went into elementary education for the rest of the time. Then I retired.

Have you kept in touch with many of the other players?

You have to understand that the movie [A League of Their Own] resurrected everybody from the dead. Ninety percent of the players got married. Ninety percent of them were grandmothers. Nobody told their kids they played. They had no things; they were all in the attic. And when the movie came out, the women were resurrected and they started telling their grandkids about the league. [They’d] never even talked about it.

I played with great women. I enjoyed them. I admired them. I learned an awful lot from them. On the whole I would say it was a 95 percent marvelous experience for three years. No regrets whatsoever. You got to have guts and just do things. Just takes guts to get out there and and take a chance and step up to the plate and swing away. That’s the name of the game.

On Your Mark, Get Set, Flow!

by Elizabeth Elder and Rachel Milbauer