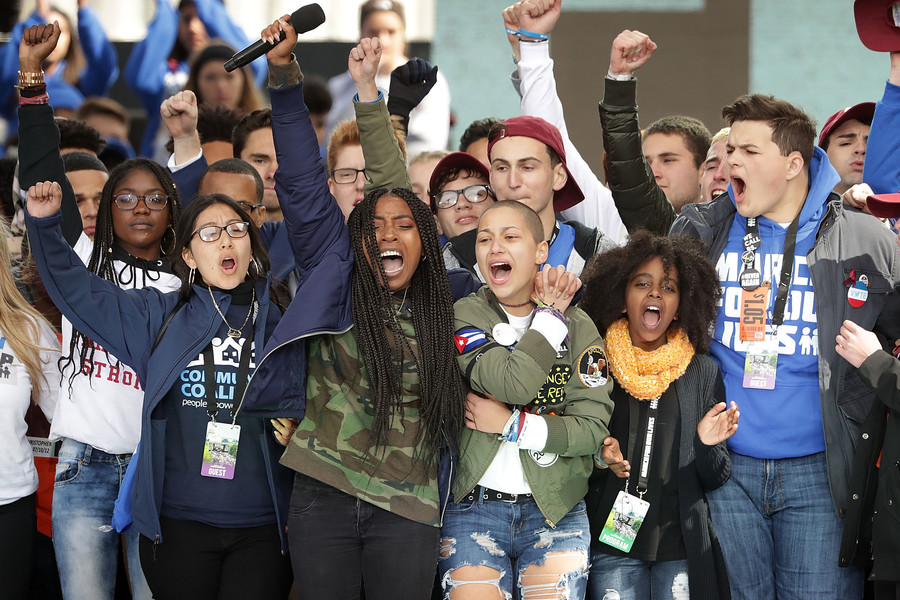 Students from Marjory Stoneman Douglas High School, including Emma Gonzalez (C), stand together on stage with other young victims of gun violence at the conclusion of the March for Our Lives rally on March 24, 2018 in Washington, DC. (Photo credit: Chip Somodevilla/Getty Images)

On April 20, 1999, two seniors walked into their Littleton, Colorado, high school, and fatally shot 12 students, one teacher, and themselves. Twenty-one others were also shot or injured. There were at least 16 school shootings in the United States before Columbine, but this particular tragedy became a flashpoint in the ongoing national conversation about mass shootings in schools. Since Columbine, hundreds of people have lost their lives in schools across the United States, including 32 college students at Virginia Tech in 2007; 20 first graders at Sandy Hook Elementary School in Newtown, Connecticut, in 2012; 10 students at Umqua Community College in Roseburg, Oregon, in 2015; and 17 people at Marjory Stoneman Douglas High School in Parkland, Florida, in 2018.

While we know the names of those who died and those who killed them, we are just beginning to fully understand the impact that these shootings have on the psyches of survivors. The National Center for PTSD finds that 28 percent of people who’ve witnessed a mass shooting develop post-traumatic stress disorder. Recently, two Parkland survivors died by suicide approximately a year after the shooting. The father of a child killed at Sandy Hook also died by suicide around the same time, highlighting that surviving a shooting or being close to it can have a heavy emotional toll.

With some stellar journalism exploring what it means to survive a traumatic event, and a growing interest in exploring how to address tragedies like this, “we have definitely hit a threshold,” says Dr. Kathy Wu, an assistant professor at Delaware Valley University who’s also a clinician at a group practice. As we near the 20 anniversary of the shooting at Columbine, I spoke with Dr. Wu about her work around trauma-focused cognitive behavioral therapy (TF-CBT) in young adults and how we can better support survivors.

Could you tell me a little more about your training in this area, especially around TF-CBT?

I received formal training and got subsequent certification in this modality of treatment for individuals who are experiencing post-traumatic stress symptoms at Rowan University’s School of Osteopathic Medicine’s CARES Institute. I received direct training from Esther Delinger, one of the founders of TF-CBT. There’s nothing better than being able to learn the strategies and interventions from the person who developed it and did the research.

TF-CBT is really a structured and short-term model with between eight and 25 sessions. There’s a great deal of assessment because we want to be sure the client is appropriate for the treatment. What makes it different is its application with children and incorporation with caregivers. Treatment is a parallel process where you work with the child and the adult in their life. That way, the work that you do has resonance when they leave your office, applying skills as they go along. Trauma doesn’t affect just the person; it has a wide reach that of course includes family. It delves not just into trauma reactions but into preexisting conditions, links to trauma, depression, anxiety, [and] perhaps other forms of destructive or unhealthy behavior.

The techniques that TF-CBT uses are geared toward helping process traumatic memories. Alongside that piece of engaging with clients in their traumatic narrative, getting them to not avoid, but really talk about it head-on, allowing the therapist to bear witness, can be really powerful for the client. Clients get to learn what triggers them, so we can stop perpetuating this sense of being disempowered, victimized, voiceless. When it’s all said and done, we have clients who are able to acknowledge aspects of their thinking about the event and restructure those thoughts in a way that is more productive, holistic, and genuine. Clients might report “I can’t be safe; I’m unloved; people can’t be trusted.” We use a gentle way of helping them reassess the accuracy and helpfulness of those thoughts.

There’s a lot of conversation right now about the lack of adequate support for survivors of mass shootings. What kinds of changes can we make when responding to survivors, especially young survivors?

Having support—not just within the family but also across communities—is really key. One of the things that happens through an experience is a person feels disconnected from the social fabric. They trusted it to keep them safe, [so] they really need to be reminded that they’re not alone in their experiences or what they will continue to experience down the line. We need to really emphasize ongoing support, especially for young people.

When an event happens, there’s shock, dismay, [and] anger. We sometimes rally around those people, but once those feelings dissipate, the attention and support goes with it. There’s this almost psychic numbing that’s happening across our society because these events are happening so often, we become desensitized. Being able to continuously account for the fact that the stages of healing are not linear, there’s the acute phase, the intermediate phase…we can’t just look at the symptoms and say once they’re reduced, the person is fine. The major work actually happens a year down the line, as is happening with the shooting [in Parkland, Florida]. Being able to reinforce support at various junctions and stretch out the timeline is really important.

Oftentimes people entering that long-term phase are the ones who are most vulnerable. The traumatic memories start morphing into debilitating anxiety and depression. There’s a greater risk for individuals at this phase to start self-medicating, and then they look around and find that [some of] the very people they may have had a shared experience with are feeling better. They ask: “What about me?” They feel this heightened isolation. What we really need to do in terms of supporting the survivors of mass shootings is continue the support, not just have this sense of urgency at the very beginning. The trajectory of the development of PTSD is not finite. It covers the person’s lifetime. Timeliness is really important.

You get this ripple effect where people [who] have increased vigilance and suspicion and are not able to trust social institutions may have minimized trust in each other. They trusted family systems and churches to keep them safe. You may see a great deal of sensitivity to perhaps the next thing they might believe to be a source of danger. With teenagers, there’s this sense that their futures are limited, and they don’t necessarily imagine a future. You have an overwhelming sense of hopelessness, which is a detrimental aspect of structural racism and structural violence that marginalized communities have to endure.

You mentioned in your faculty bio that you love memoirs. Are there any memoirs you’ve read that you think more people should be reading?

I liken the process of reading [memoirs] to icebreaker questions, like if you could have dinner or sit down for a meal with anyone living or dead, who would it be? I always think memoirs are conversations you could have over a meal.You get inside the author’s head and have their lived experiences as though they’re right there. I am drawn to stories of resilience, stories that are raw, honest, heartwarming, that make you a little uncomfortable or even angry. I walk away from those reading experiences feeling more empathic.

Some that stick out are Elie Wiesel’s Night, Frank McCourt’s Angela’s Ashes and ‘tis, Richard Wright’s Black Boy, Ishmael Beah’s A Long Way Gone, Paul Kalanithi’s When Breath Becomes Air, Trevor Noah’s Born a Crime, and Jesmyn Ward’s Men We Reaped. They all have this thread of resiliency, experiences with trauma, and being able to have a happy ending. It doesn’t necessarily mean a happy ending for the author, but their ability to live, reflect, and write is a happy ending.

Read this Next: Sometimes it Snows in April 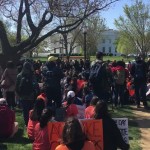 by Joshunda Sanders
For decades, April has marked a somber commemoration in the annals of gun violence, and this month is no exception.