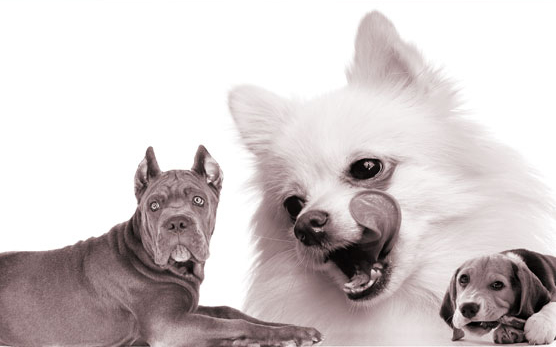 Dogs We Saw This Week: A Podcast

Bitch HQ sits in a tiny space above a restaurant on Alberta Street in Portland, Oregon. My desk is right next to a window that overlooks a bustling corner of people walking their dogs and getting coffee. Every day, I make at least one major announcement about a cute dog either: crossing the street, losing its mind over meeting another dog, and/or taking its doggone time catching up to its human companion. Did I ever think that I’d stumble upon a podcast that meets me where I’m at with my dog observations? No. Dogs We Saw This Week: A Podcast is exactly what its title promises. I want to hear more about Rocco—in detail. You probably need to hear about Rocco and the random pop culture discussions peppered in between whether or not he is afraid of briefcases in general or briefcases when women are carrying them because he’s sexist. And you probably also need to laugh. —Kate Lesniak, publisher 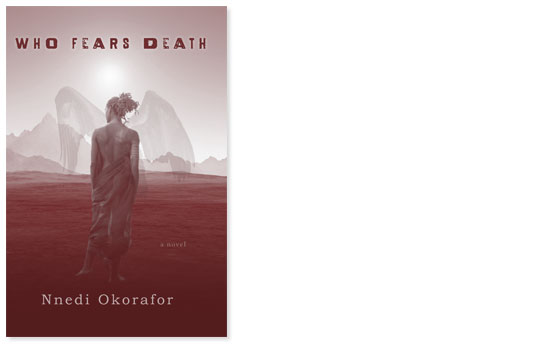 This year will see the HBO series based on Nnedi Okorafor’s 2010 sci-fi fantasy novel Who Fears Death. The novel is a coming-of-age story set in a postapocalyptic Africa and follows Onyesowu, a young girl trying to understand her magical powers. She has to battle her sorcerer father to unite the land in which she lives. The show will be executive produced by George R.R. Martin (Game of Thrones) with Okorafor consulting. Who Fears Death was awarded the 2011 World Fantasy Award for Best Novel and the 2010 Carl Brandon Kindred Award “for an outstanding work of speculative fiction dealing with race and ethnicity.” Read the book before the series premieres! —Dahlia Grossman-Heinze, Senior Engagement Editor 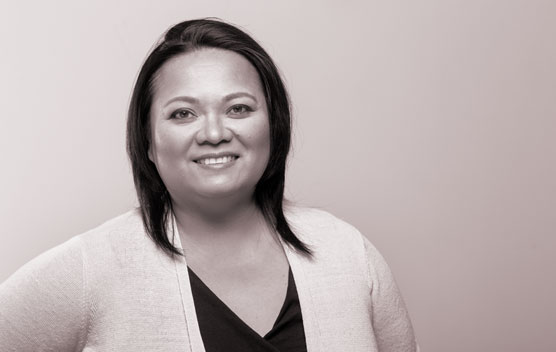 Grace Talusan writes uncommon stories about family, displacement, identity, and all the unsayable things that come from being born in a country that is not your home and exploring the country you call home in which you do not always belong. Talusan’s portfolio is a passport to improbable survival. She is the recent winner of the 2017 Restless Books Prize for New Immigrant Writing for Nonfiction, and when a writer licenses herself to offer this kind of borderless exploration, the gift is to all who wander. —Lisa Factora-Borchers, Editorial Director 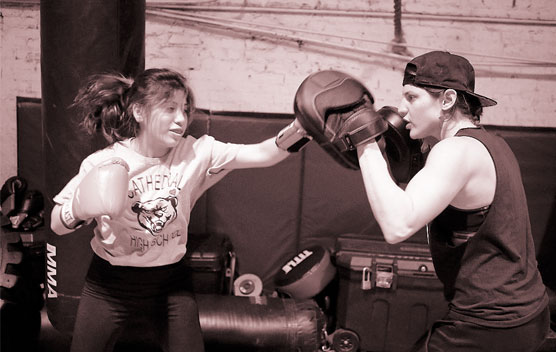 “What if girls didn’t question their strength?” This is the driving philosophy behind She Fights Foundation’s Youth Boxing Program, which offers free boxing lessons to girls ages 14 to 19 from low-income neighborhoods in NYC. Not a teen? She Fights has also created Feminist Fight Club as a means to build community around women fighters, encouraging them to hit back against the sexism and misogyny that run rampant in the ring, to show up for one another, and to support women in combat sports looking to make it to a professional level. Contact sports changed everything for me when I discovered them in college. Now that my knee won’t let me play rugby anymore, I’m thrilled to find an organization pushing women to be the strongest versions of themselves, whether it looks “cute” or not. —Soraya Membreno, Director of Community 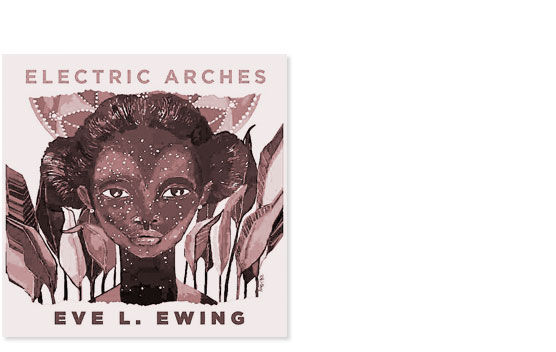 Eve L. Ewing’s debut poetry collection, Electric Arches, reads less like poetry and more like a dream or a trance. Published by Haymarket Books—a radical, independent, nonprofit book publisher in Chicago committed to “books that contribute to struggles for social and economic justice”—Ewing’s poetry offers a rich portrait of liberated Black girlhood. Which is not to say that these poems live in a world without all the current struggles of systemic racism and misogyny, but rather that Ewing has bestowed upon us a vision of what it might look like to subvert it, to have power over it. Hers is a world where we have magic at our fingertips. Even if you don’t think you’re a “poetry person,” or better yet, especially if you don’t think you are, this is a book to keep within arm’s reach. —SM 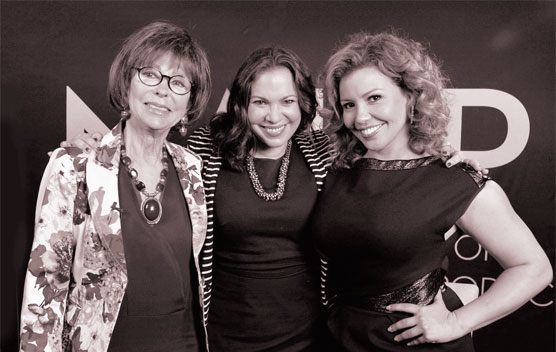 Are you loving the new One Day at a Time? Well, cocreater Gloria Calderon Kellett has another show up her sleeve! The upcoming semiautobiographical History of Them will be something like a mix of How I Met Your Mother (for which Kellett was a staff writer) and One Day at a Time as the series follows a multicultural relationship, narrated by the couple’s future daughter. Can’t wait to see what real-life gems Kellett mines to explore romantic relation-ships between Latinx and white folks. —DGH 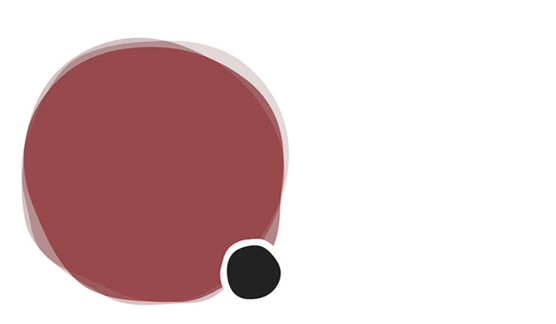 Cofounder Nadya Okamoto got the idea for Period during her first two years of high school when her family was without a physical home. “I was constantly thinking about the balance and spectrum of privilege around me, and connecting with homeless women who were in much worse living situations than I was,” writes Okamoto, now a Harvard sophomore. “Hearing how periods were one of their biggest challenges pushed me to realize how strongly I believed menstrual hygiene was a right, and not a privilege.” Period’s mission includes serving people who may not have access to menstrual products, educating high school and college students to destigmatize conversations about periods, and working as advocates for supportive public policy and law. Keep an eye out for their annual conference Period Con, and check out their website to learn about how to start a chapter or support their work. —Kristin Rogers Brown, Art Director 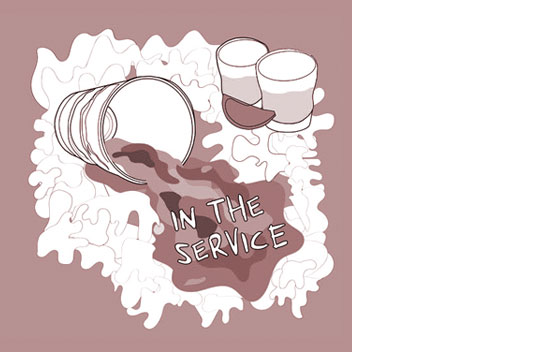 In the Service Podcast

The restaurant industry has been accruing bad headlines for a while now, whether it’s the wages that keep workers poor or white American girls traveling to foreign countries and stealing recipes. However, it’s rare to hear about the industry from those within. That’s where In the Service comes in: Cohosts Kath and Jan have 20 years of New York City restaurant experience between them, and their witty, sometimes laugh-out-loud funny podcast explores what it’s really like to work in the industry, discussing everything from getting tips, encountering sexism, and navigating those Yelp reviews we all love to write when the service isn’t up to par. Kath and Jan also interview other industry professionals, including chefs, restaurant owners, and those who keep the restaurant industry alive. If you want to know how restaurants survive and thrive, this is definitely the podcast for you. —Evette Dionne, Senior Editor