Red Aunts, #1 Chicken (Epitaph)
This Long Beach, CA quartet deals in speedy, vicious punk riffs and tantrumy screams guaranteed to send the average guy's testicles speeding back into his abdomen. Dirty sex, weapons, and roller derby are the order of the day, along with an ode to Patty Hearst. The album is subtitled "14 songs in 23 minutes," and the offerings range from the punchy ("Detroit Valentine") to the brutal ("Willabelle"), with a couple of fuzzed-out slide guitar things adding a crazed countryish element to the stew. This is the aural equivalent of slamming your no-good boyfriend's head in the door of your hotrod, with none of the unpleasant side effects.

Cub, Betti-Cola (Mint)
In the unrelentingly crappy new "Gen-X" book Our Noise by Jeff Gomez, one of the slacker-than-thou protagonists designs a t-shirt that reads "Cub is Goddess." I have to agree with this sentiment, though it's probably the only thing on which I could agree with any of those one-dimensional characters. But I digress. Members of the hyper-girly "cuddle-core" movement, this Vancouver band offer up minimalist, tuneful, Beat Happening-style pop songs with no showy musical flourishes. The songs are short and sweet, with an emphasis on goofy lyrics and animal references. ("Don't understand the things that you do/ Promised you'd make me the king of the zoo") Love songs to girls, love songs to boys, love songs to a chinchilla—this album has it all.

Cibo Matto, "Birthday Cake"
b/w "Black Hole Sun"
Cibo Matto is two Japanese women from New York whose moniker means "food madness" in Italian, and indeed, most of their songs have to do with food. At a recent S.F. show, they served up a bunch of songs about artichoke soup, beef jerky, chicken, and making said birthday cake. ("Extra sugar, extra salt, extra oil and MSG!") Their sound is an arty, funky hip-hop free-for-all that is impossible to witness or listen to without breaking into a huge grin. They have a brand-spankin' new major label album that will probably be huge. The B-side of this single is a Soundgarden cover, for some reason sung in French.

Liz Phair, Juvenilia (Matador)
Most of these songs were recorded before Liz got super-huge and graced the cover of Rolling Stone's odious "Women in Rock" issue, and it's nice to hear these unslick, mostly acoustic things contrasted with her other, very produced stuff. "Animal Girl" is a gorgeous, haunting piano-and-vocals piece, and her deadpan humor and flair for off-key melodic hooks is displayed well in songs like "South Dakota" and "Easy." But the scene-stealer is the amped-up cover of the Vapors' early 80s masturbation anthem "Turning Japanese." Since Liz is probably going to keep getting slicker and glossier, it's a good thing this album is out there.

Team Dresch, Personal Best (Chainsaw/Candy-Ass)
This album is poppy, crackling dyke punk, and takes its name from the Mariel Hemingway movie that we weren't supposed to watch when we were younger. Rythmic, acidic rants like "Hate the Christian Right" alternate with slower, acoustic-tinged songs like "She's Amazing." "Freewheel" is a slightly rockabilly kiss-off to a confused girlfriend, featuring soaring harmonies and a seriously catchy chorus. Members of this band are also responsible for the Free to Fight compilation, which features the sounds of girl punk bands interspersed with spoken-word pieces on fighting back against street harassment and sexual assault. 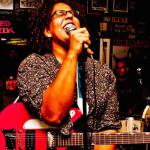 by Brittny Pierre
A mixtape of artists who embody an edgy spin on what represents Black music.