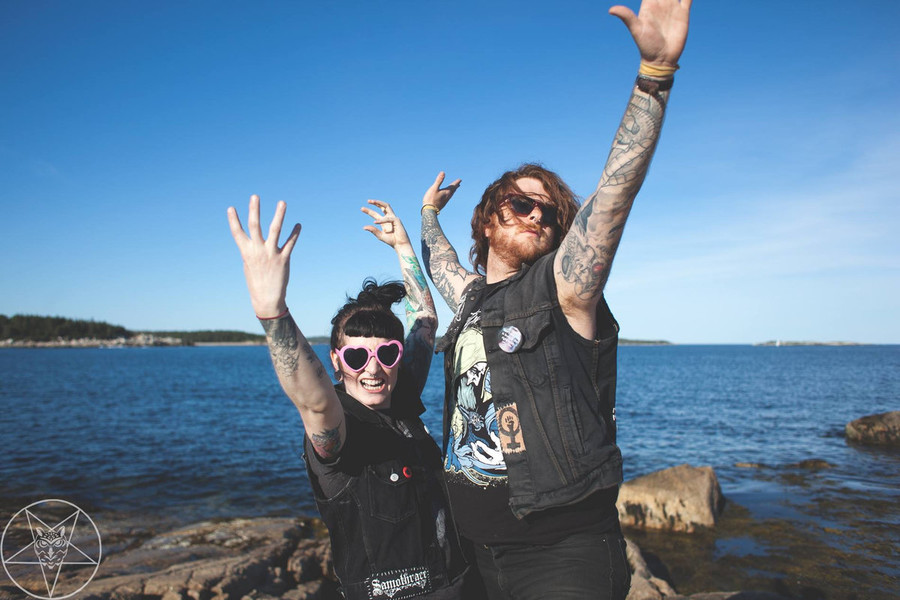 Fascism has already come to America (and to Brazil, and Poland, and so many other places), so it’s no longer a question of if or when but how we pull it up by its rotted roots. The struggle against right-wing violence impacts every segment of our society, from the halls of power to the grimy basement shows and dive bars that the country’s heavy-metal community calls home. But metal is too good for Nazis, and there are a growing number of artists who agree—so they’re using their music to make it crystal clear which side they stand on.

This playlist is just the tip of the iceberg. Many of the most compelling, visceral, and truly revolutionary artists in the metal sphere, like Yovel, Trespasser, and Hag Graef, are working overtime in the underground. Unfortunately, their music isn’t available on Spotify, which is why they’re not on this list. For now, consider this a survey of the frontlines of heavy metal’s fight against fascism, both within our own ranks and in the wider war against oppression.

Northern England’s Dawn Ray’d (whose name is a reference to American anarchist Voltairine de Cleyre) is one of the most prominent bands flying the black flag for anti-fascist extreme metal, and “Fire Sermon” is a perfect encaspsulation of their crisp songwriting, epic black-metal grandeur, gorgeous violin interludes, and revolutionary fervor. Let the fires burn as a signal!

“Experimental grindcore” is too tidy a way to describe what Cloud Rat does. Their seamless, scintillating blend of grind, crust, hardcore, noise, and achingly gorgeous acoustic passages is a true marvel, and their on-point politics make it even easier to fall headlong in love with the unholy racket.

Dispossessed is a revolutionary collective led by a group of disenfranchised individuals from what’s now known as Australia. On their latest album, the blackened death opus Warpath Never Ends, the lyrics center on anti-racism, Indigenous sovereignty, and the devastating effects of colonial genocide. As they make clear on songs like “PC Terrorist,” Dispossessed is not here to heal anyone’s white guilt: “We will not bend/ We will not break!”

False, “A Victual for Our Dead Selves”

False’s inspired take on melodic, epic black metal would sound right at home in the midst of a wintery Scandinavian snowfall, but their music emerges from a decidedly DIY punk perspective. The Minneapolis collective also just released what might be the best metal album of 2019, Portent.

Sunrot hate fascists more than they love New Jersey—and that’s really saying something, because these heroes of the tri-state area are all about building resistance and community in the land of Taylor Ham. Their industrialized, noisy doom is a blessing and a curse.

Vile Creature, “Harbinger of Nothing”

This Canadian duo’s queer, anti-oppressive doom is a balm for the soul of anyone who has ever felt like they didn’t belong in metal—and a jab to the throat of any fascist trashbag who made them feel that way in the first place.

An anti-fascist, anti-capitalist, anarchist feminist, Lord of the Rings-inspired atmospheric black-metal project from noted anarchist author Margaret Killjoy? It really doesn’t get much better than this.

A palpable sense of vitriol and anxiety simmers beneath the chords of Woe’s intricate black- metal compositions as they rage against capitalism, fascism, and the dying of the light. As brilliantine melodies crash and tumble around him, vocalist Chris Grigg howls mockery at the war machine while entreating us to mourn for the lost—and to fear for the future.

Ilsa’s sound is born of a hellacious trifecta of death metal, sludgy doom, and crust punk, and their queer anarchist politics only add fuel to the fire. “Nasty, Brutish” takes the listener lurching down toward hell (or the revolution, whichever comes first).

Violet Cold creator Emin Guliyev’s tendency to flit between genres—from the iciest atmospheric black metal to shoegaze, drum and bass, house, ambient, and noise—is a testament to his boundless well of creativity. The anti-oppressive political resolve fueling its sonic experimentations is the only constant to be found within this Azerbaijani project.

Read this Next: Smashing Through the Boundaries: Heavy Metal’s Racism and Sexism Problem—and How It Can Change