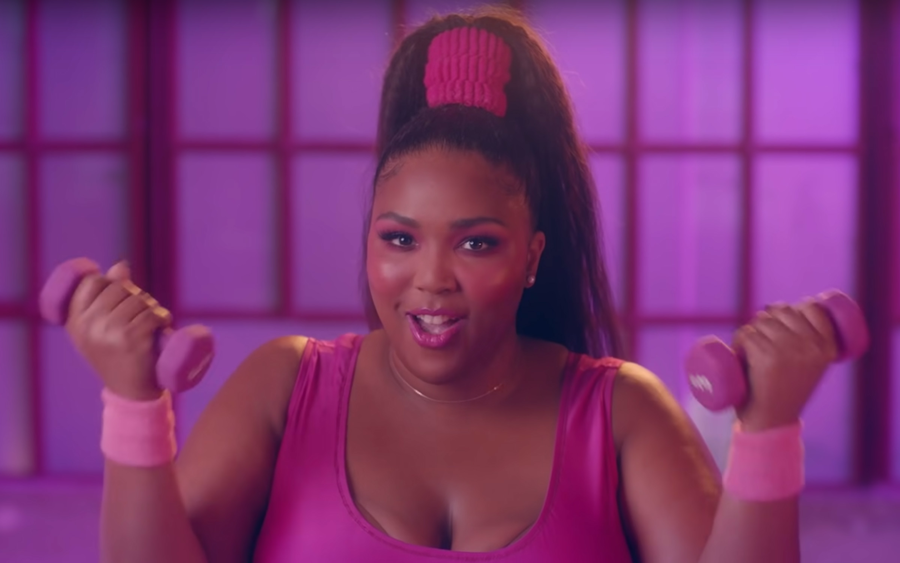 Lizzo in the “Juice” video (Photo credit: Screenshot from YouTube/Lizzo)

2019 has been a hellacious year. It started with Donald Trump being president and it’s ending with him being impeached, even as the Conservative Party gain control of the government in the United Kingdom. Reproductive rights are under attack in multiple states in the United States, and a number of people have died at the hands of the police. Through it all though, music has remained a salve—a means of escape in a world that’s (literally) on fire.

Music remains one of the guiding lights for the Bitch staff; it’s a way of staying connected, harboring joy, and most importantly, jamming out. So, we are continuing an age-old tradition of presenting our staff-selected best songs of 2019 list. Of course, this isn’t an exhaustive list; there are a number of other songs that could’ve made it, but these are the songs we hope you’ll listen to leading up to 2020. We hope they bring you as much happiness as they’ve brought us.

Lizzo had an incredible 2019. Between hitting the top of the Billboard Hot 100 chart and nabbing eight Grammy awards, there are few artists who had as much of an impact this year. “Juice” is the very embodiment of Lizzo’s ethos: It’s catchy, it’s fun, and it leans fully into the idea that self-love solves all. “Heard you say I’m not the baddest, bitch, you lied” is a way of life. —Evette Dionne, editor-in-chief

Igor is, by far, my most listened to album in 2019. “Earfquake” is a great single and the must-see video features a cameo from Tracee Ellis Ross. Rumor has it that Tyler, the Creator wrote this song for Justin Bieber who turned it down. Do you think Bieber regrets it?—Danny Fish, operations support coordinator

Lil Nas X is important to a generation of folks, including me, a queer Black person who lives for memes. His debut EP, 7, is full of songs that are beautifully afrofuturistic, but feature fun, sometimes strange, lyrics. In “Rodeo,” he opts for Southern twang and pulls in Cardi B, blending genre as flawlessly as he does in the larger album. A queer Black kid dominating country charts in 2019? A fantasy. —Rachel Charlene Lewis, Senior Editor

I don’t actually know if Robyn is queer—nor do I care to speculate about a celebrity’s sexual orientation—but Robyn has firmly established herself as a queer icon for a reason. “Ever Again” brings the same magic as earlier hits like “Dancing on My Own” and “Call Your Girlfriend.” —Marina Watanabe, social media editor

Big Freedia could not be more herself than in the video for “Louder.” She’s got the trademark checkered suit, the gospel choir turned twerk team, the slick ’90s aesthetic, and at least two of her original dancers. It’s also mixed up with Snap’s “The Power,” which she plays homage to in the video. Need a pick-me-up? This jam will keep you hydrated and replenish your electrolytes. “I’m screamin’ and screamin’ it louder!/ I got the, I got the power!”—KaeLyn Rich, executive director

Just when it seems as if Beyoncé can’t top herself, she does it again—and then again. The Lion King: The Gift, a compilation album she curated and tapped African producers to bring to life, features a wealth of songs that both celebrate Blackness across the diaspora and complement the experience of watching the rebooted Lion King. “Brown Skin Girl,” one of the album’s singles, is a masterpiece that celebrates melanin. What a gift, indeed. —ED

Though Carly Rae Jepsen didn’t come back with the disco album her fans were hoping for (we’re still digging through her backyard for it), her 2019 album Dedicated includes some standout hits with retro inspiration, including the ultra catchy “Julien.”—Alison Vu, director of fundraising

King Princess, “Hit the Back”

“Hit The Back,” a self-proclaimed “bottoming anthem, is everything King Princess’s queer fandom has been waiting for: lyrics that pull no punches (“And you know that I’m around/ I’m your pet”), a sensual melody, and overall gay as hell vibes.—RCL

If you happen to be the gritty and unpolished daughter of a feminist single mother, this just might be your anthem. What I mean by that is: I love this song so much that I ordered a custom-made tapestry screaming “don’t fuck with my freedom” and hung it up in my living room and I am okay with myself. —Carmen Rios, Popaganda host

Ari Lennox’s album Shea Butter Baby is a whole, big ass mood, and “New Apartment” is definitely a standout. This is the perfect song for anyone whose finally found a place to call their own and knows that they can “Walk around this bitch naked/ And nobody can tell me shit.” You can take comfort in knowing that the dishes in the sink were left by you and only you.—Patricia Romero, community programs manager

Summer Walker’s debut album, Over It, is full of anthems, including “Playing Games,” which intersperses Destiny’s Child’s classic 1999 song “Say My Name.” Singing about being treated with respect by a romantic partner while paying homage to an iconic group? Come through, Summer!—ED

As a TikTok fanatic, I heard approximately 15 seconds of “Wait A Minute!” on a loop as I scrolled through the app for weeks before I realized it was by the one and only Willow. The exclamation point in the song’s title is well earned, as the danceable beat is matched with several needing asks as Willow seeks to find herself: “I think I left my consciousness in the sixth dimension,” she sings, asking for assistance. Also, the lyrics “I’ll run my hands through your hair/ You wanna run your fingers through mine/ But my dreads too thick and that’s alright” deserve every award.—RCL

Through it all though, music has remained a salve—a means of escape in a world that’s (literally) on fire.

I’m ready for Hayley Kiyoko’s new Netflix show about a queer school girl witch coven supporting each other and exorcising their toxic ex-girlfriends. Facts: Kiyoki directed the video for “I Wish” and it’s so cute. She succeeded in removing school girl costumes from the male gaze, which I know seems impossible, but it’s true! This is the bisexual witch representation we all deserve.—KR

The rockin’ hook of the original two minute pre-Billy Ray Cyrus version caught my attention in a big way the first time I heard it. (It’s still my favorite version.) I started browsing for more info on Lil Nas X and the origin of the song right away. Lil Nas X purchased the beat online from BeatStars for $30 and crafted it into the most talked about musical anthem of the year.—DF

Admittedly, I’m new to the King Princess fan club, but she has quickly become one of my favorite artists. When I watched her November 2019 SNL performance, I said to my partner, “I don’t know what she’s doing, but I’m obsessed with it.” “Hit the Back” is my actual favorite, but to avoid repeating songs from my other coworkers, I’m putting “Trust Nobody,” a solid contender, on this list.—MW

Beyond being a straight up jam, “Only Child” is Whack’s anthem for people who are fed up with not being prioritized. This song encourages us to call people out for their selfishness, their tired excuses, and for assuming that we will be there when, and only when, they need us. “What about me?” she sings. No more of that in 2020!—Noa Azulai, 2019 writing fellow in sexual politics

The standout soloist who placed fourth on the now-controversial competition show Produce 101 released this track in January, and has been considered a song of the year since then. The choreography for this Cinderella-but-darker track includes USING HER LEGS as clock hands.—AV

Billie Eilish, “all the good girls go to hell”

I was immediately drawn to Eilish’s depression-but-make-it-catchy vibe. She reminds me of favorite artists of my teen years like Fiona Apple and Alanis Morisette and Hole. “bad guy” is the first Eilish song I heard, but “all the good girls go to hell”speaks to my inner angsty feminist with lyrics like “Man is such a fool/ Why are we saving him?” And “All the good girls go to hell/ ‘Cause even God herself has enemies.”—KR

“Like Me” is one of my favorite songs on Steve Lacy’s debut solo album, Apollo XXI. It is a nine-minute song broken up into three parts and it feels like you’re listening to a series of feelings on gender, sexuality, fear, and love. The whole album is a feelings party and I love it.—PR

2019 was Clairo’s year. Headlining the new “bedroom pop” genre, Clairo’s songs are fun, tender, and will put you in your bag, so beware. “Sofia” was her first song I ever heard, and I’ve been attached to it since. A song for the queer hopeless romantics, “Sofia” dishes out the vulnerability of someone so in love they are willing to be hurt, espeically when that love is demonized by so many people. “I think we could do it if we tried/ If only to say, you’re mine/ Sofia, know that you and I/ Shouldn’t feel like a crime.” This song is powerful because it makes you root for them, wherever they may be. —NA

I’m enamored with the idea of women taking back our notions of the American West, and not only because I’m a little bit country in addition to a little bit rock and roll. The Highwomen are pure feminist country magic, and their send-up of the Highwaymen’s signature song (and titular album) is a gift that will not stop giving for the entirety of a road trip across the desert.—CR

2019 was a transformative year for me, and I attribute that solely to discovering Lizzo. Her entire Cuz I Love You album is killer, but the opening title track stands out to me in particular. Her impressive vocals are on full display in this soulful ballad, and it’s truly a joy to get to witness Lizzo find power in vulnerability.—MW

Read this Next: “Cuz I Love You” Invites Women to a Self-Love that Runs Deeper than Hashtags

by Natelegé Whaley
“Cuz I Love You’s” self-love anthems aren’t cheesy, forced, or performative, thanks to Lizzo’s evolution as an artist.