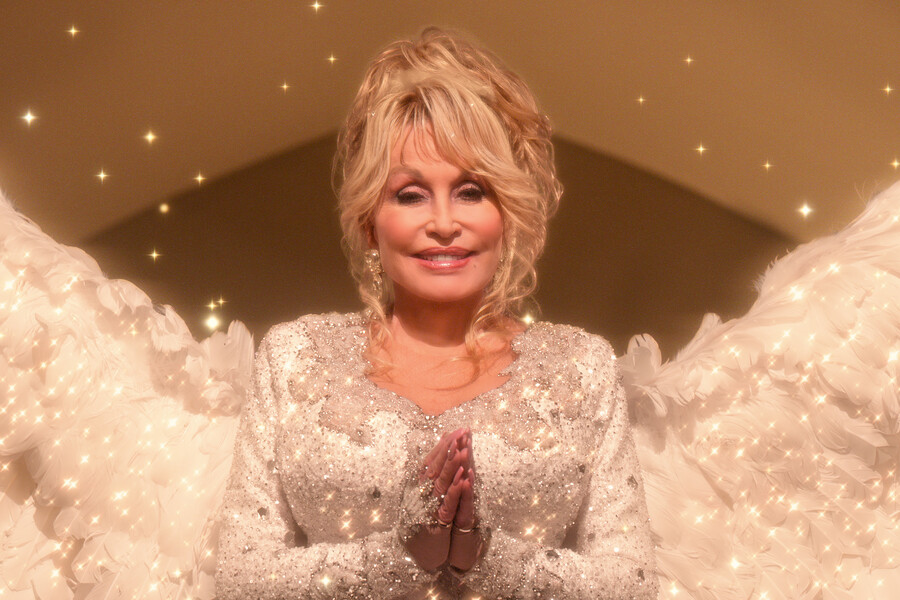 We’re heading into a holiday season like no other. Many of us are gearing up for our first holidays alone—without our usual family gatherings—and we might be turning to our laptops and televisions more than usual to fill those gaps. Luckily, we have our favorite holiday films to comfort us in both big and small ways. Whether you are all about a classic family-friendly holiday film (so cozy!), dreaming about a holiday horror (hey, we’re not judging), or want to watch queer people fall in love (multiple queer holiday films in one year! can you believe it?), we’ve got you covered. Happy watching and happy holidays.

This is one of my favorite holiday movies, mostly because Queen Latifah plays the protagonist, Georgia, a department-store employee who learns that she has a terminal condition that will likely kill her in a few short weeks. The shocking diagnosis prompts Georgia to change her drab life: She travels to a luxurious resort in Europe, eats amazing food, and has the adventure of a lifetime. Queen Latifah hilariously brings this comedy to life with her usual charm.

If you prefer Christmas movies that are less about the holiday itself and more about the lives of its characters, then Happy Christmas might be more your speed. After a breakup, Jenny (Anna Kendrick) moves in with her older brother, Jeff (Joe Swanberg, also the film’s director), and complicates his life with his wife, Kelly (Melanie Lynskey), who is a famous novelist. Drama ensues, especially when Jenny inspires Kelly to write a romance novel. Jenny and Kelly’s newfound bond helps this film find its way.

3. My One Christmas Wish

My One Christmas Wish - Movie Preview

Based on a true story, My One Christmas Wish follows Jackie (Amber Riley), an orphaned college student who posts an ad looking for parents she can celebrate the holidays with. She’s shocked by the overwhelmingly positive response, and she finds herself surrounded by love and support for the holidays. It’s a wholesome and warm film to watch this holiday season.

Is Carol my absolute favorite movie? No. But do I watch it every single winter? Absolutely. Based in 1950s Manhattan, the film begins as Carol (Cate Blanchett) enters the department store where young Therese (Roony Mara) works and immediately catches her eye. With Sarah Paulson portraying Abby, Carol’s closest friend, Carol offers the rare star-studded cast in a well-crafted lesbian love story. It’s sad, it’s gorgeous, and it’s perfect for a long night of drinking hot chocolate and probably crying.

The sequel to 2016’s Bad Moms, A Bad Moms Christmas follows messy, complicated mothers Amy (Mila Kunis), Kiki (Kristen Bell), and Carla (Kathryn Hahn), who spent the first film bonding about how hard it is to be a good mom. Now, the holidays have arrived, and things have gotten even harder as their own moms appear. Christine Baranski, Cheryl Hines, and Susan Sarandon could not be more fantastic, and the film is a hilarious, foul-mouthed break from the usual clean-and-tidy holiday slate.

I didn’t expect Bonnie Bennett (Kat Graham) to become the face of Netflix’s holiday films (she’s also the star of 2020’s Operation Christmas Drop), but it’s what she deserves. The Holiday Calendar is a story about love, family, and trust. Graham stars as Abby, a photographer whose grandfather gifts her a magical advent calendar. With help from her longtime best friend, Josh (Quincy Brown), Abby gets sucked into a holiday adventure.

For fans of To All the Boys I’ve Loved Before (2018) and The Kissing Booth (2018), Let It Snow might have been so quietly and wonderfully inclusive as to have slipped under the radar when it debuted last year. But the 2019 film is more than worthy of your streaming slate for this year. The movie follows a diverse group of teens, some who are struggling with being closeted, others who are pop stars, and still others who are worried about what their growing up means for their parents. It’s full of sweet moments and positive notes and proves that Netflix can occasionally nail good original holiday movies.

Have you ever watched a holiday movie and said, Wow, I wish this were a slasher film? If so, Sophia Takal’s 2019 remake of the 1974 original is for you. Takal wanted the remake to be “fiercely feminist,” and the film, set largely within Greek life, runs full speed into feminist issues like sexual violence and toxic masculinity. A group of sorority sisters—Riley (Imogen Poots), Kris (Aleyse Shannon), Marty (Lily Donoghue), and Jesse (Brittany O’Grady)—are being stalked by masked frat boys. Violence ensues, which might be difficult to watch for people, myself included, who can’t handle blood and gore. While the film has room for improvement, it gets points for reckoning with the misogyny built into fraternity life and the way that campus leaders allow that entanglement to fester.

As soon as I heard “lead bisexual character” in the context of a holiday film, I was in. Jennifer (Nia Fairweather) is nervous about her upcoming wedding to David (Otoja Abit), but she comes to realize it might be a little more than cold feet when she’s visited by a guardian angel, Azrael (Cooper Koch). To help her sort out her stress over her romantic future, Azrael brings her to an alternative future in which Jennifer gets a real shot at love with her late best friend and first love Gabrielle (Adriana DeMeo). Curl up and get ready to be emotional over this one.

Jingle Jangle: A Christmas Journey is a very strange film, but that’s what makes it so entertaining. Inventive toymaker Jeronicus (Forest Whitaker) lost his cheeriness and creativity after one of his dolls, Don Juan Diego (Ricky Martin) conspired with his apprentice, Gustafson (Keegan-Michael Key), to steal his inventions and pass them off as their own. To make things worse, Jeronicus is estranged from his daughter (Anika Noni Rose) and his magical toyshop is in danger of being foreclosed. However, when his granddaughter, Journey (Madalen Mills), comes to visit—and brings her inventive spirit with her—the warmth of the holiday season seeps back into his world. There’s singing, dancing, and subtle musings about classism. Jingle Jangle: A Christmas Journey is a deeply festive film best paired with holiday treats.

11. Dolly Parton’s Christmas on the Square

Dolly Parton and Christine Baranski? I’m sold. Dolly Parton’s Christmas on the Square is the holiday film we deserve after the hell that’s been 2020. Regina Fuller (Baranski), a wealthy woman, returns to her small hometown in order to sell it to a developer. She’s visited by Angel (Parton), who—through song, of course—helps her realize that money can’t bring her happiness.

If I’d said “gay holiday movie” and “Hallmark” in the same sentence in 2010, you probably wouldn’t have believed me. But my friends, we’ve finally arrived. Brandon Mitchell (Jonathan Bennett), and his husband, Jake (Brad Harder), are heading home for the holidays, but it’s already a stressful visit: They’re hopeful and anxious that the next phone that rings will come with an answer about the pending adoption of their first child. No matter what, it will never not bring me a little bit of joy to know that straight people around the country will turn on Hallmark this holiday season and see gay people on their screens.

I have been counting down the days to Happiest Season—and it’s worth the wait. While the film doesn’t check every box, there’s something delightful about a queer holiday film, especially a queer holiday film with multiple queer characters. Clea DuVall’s film follows Abby (Kristen Stewart) as she’s going to spend her first Christmas with her girlfriend, Harper’s (Mackenzie Davis) family. But as they hit the road, Harper reveals a horrible secret: She never came out to her family and hasn’t told them that she’s dating Abby. Naturally, chaos ensues. Prepare to cry, prepare to laugh, and prepare to be filled with glee when you meet John (Dan Levy), Abby’s best friend, and Riley (Aubrey Plaza), Harper’s too-cool ex-girlfriend.

If The Holiday (2006) is your absolute favorite holiday film, you’ll likely enjoy A Christmas Exchange. The Lifetime film follows Molly Cooper (Laura Vandervoort) and Patrick Kingston (Rainbow Sun Francks), who swap homes. As they begin to correspond from afar, they begin to fall for each other, too. 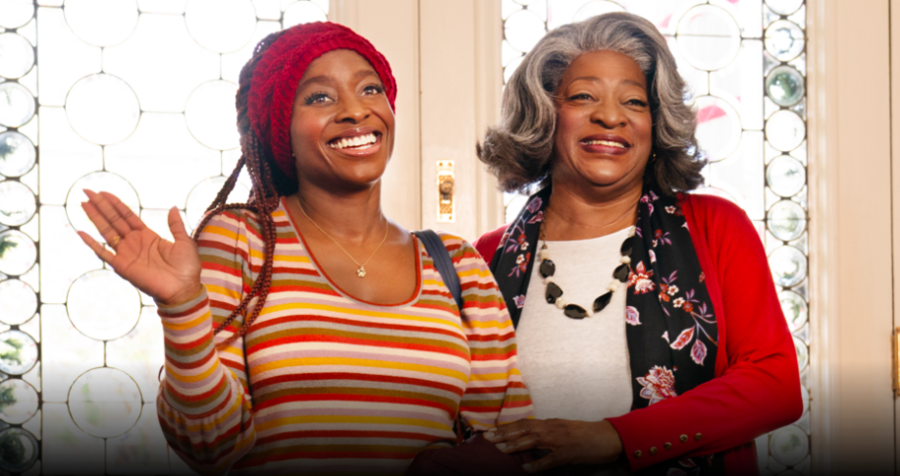 Halle Downing (Idara Victor) was placed in foster care as a child, so she’s surprised when her biological family invites her to their New Orleans home for Christmas. The longer she spends with them, the more she learns about the ins and outs of her relatives, and over the course of the film, she learns lessons about the importance of family, trust, and love. I was excited to see that First Christmas includes a queer storyline and I hope that this film provides a sense of familial love this holiday season.

Read this Next: Meaningless Mashup 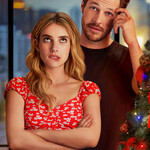 by Rachel Charlene Lewis
“Holidate” is a Hallmark-inspired movie for straight people who think saying words like “tits” makes them edgy.