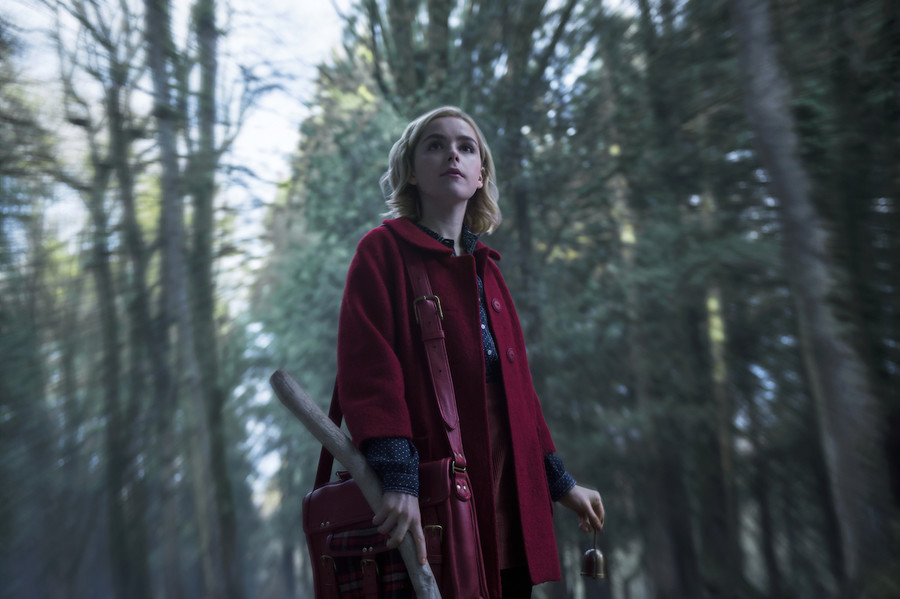 This fall’s TV shows truly have something for everyone: tales of prison breaks and best friends, Russian dynasties and time travel, scandal and witches galore. These 13 shows will fill you with laughs, scares, and high-wire tension—and they all pair well with hot chocolate and a candy apple.

It’s 1686 and 18-year-old Nella Oortman (The Witch’s Anya Taylor-Joy!) has been sent to Amsterdam to live with her new wealthy husband Johannes Brandt (Alex Hassell). When they meet, Johannes presents Nella with a wedding gift: a miniature dollhouse version of their home. As Nella furnishes it, she begins to uncover the secrets and dangers of the Brandt household. Who is sending Nella miniature versions of the people and items in her home? And why are they eerily able to predict the future? The Miniaturist, based on the best-selling novel of the same name by Jessie Burton, is full of delicious suspense.

The newest season of Ryan Murphy’s horror-anthology series has arrived. Season 8 begins in the wake of a nuclear apocalypse, where a group of survivors lives in a sealed bunker. Things are bound to get tense when you’re locked up and the world has ended, and the survivors start to question what they’ve actually survived. We’ve been told that this season is going to be a crossover of previous AHS seasons Murder House and Coven (the best ones), so I’ll be watching and waiting for the return of the Supreme.

Murphy Brown is back! The ’90s sitcom starred Candice Bergen as the eponymous journalist and news anchor. Now it’s 20 years later, and Murphy anchors a cable morning show, Murphy In the Morning, with her old team. Murphy’s son Avery is a conservative anchor on a rival cable morning show (rude), and the first episode of the new season is titled “Fake News,” so I know we’re going to hear the Murphy Brown take on all things Trump.

4. How to Get Away with Murder

Season 5 Official Trailer - How To Get Away With Murder

Viola Davis became the first Black woman to win an Emmy for Outstanding Lead Actress in a Drama Series for her portrayal of Annalise Keating, and she’s not about to slow down now. Annalise has weathered four seasons of intrigue and catastrophe. Though season 5 begins as her class action lawsuit is helping her win back notoriety as a lawyer, I’m sure another murder or scandal is just around the corner to shake everything up.

It only took 12 seasons, but we finally have a female Doctor! Doctor Who is a British sci-fi series that’s been on television since 1963. The Doctor is a Time Lord, an alien from the planet Gallifrey who travels the universe helping those in need. Time Lords can transform into “new” bodies as they’re injured or age, so 13 actors have played Doctor Who, but this fall, Jodie Whittaker will be the first woman Doctor Who. Can’t wait.

In the season 3 finale of Crazy Ex-Girlfriend, Rebecca confessed to (kind of) trying to kill someone and is now doing enough jail time to sneak in a version of Chicago’s “Cell Block Tango” titled “Everyone’s Got a Story.” This will be the fourth and final season of Crazy Ex-Girlfriend, so get ready to say goodbye to Rebecca Bunch (but definitely not to Rachel Bloom).

7. The Haunting of Hill House

Shirley Jackson’s classic novel has been adapted for the screen twice, and now Netflix is reinterpreting the queen of horror’s masterpiece. The five Crain children grow up in the old and creepy Hill House while their parents remodel the mansion to flip it. Bumps in the night, howling hounds, and terrifying occurences become a nightly routine and the Crains are forced to flee when the house claims a family member as one of its own. The 1959 novel follows a group investigating the supernatural events at Hill House, and the Netflix series cleverly resets the events of the novel during the childhood of the Crain siblings. Decades later, when Nell, the youngest Crain daughter, goes back to Hill House in the dead of night, the rest of the Crains are forced to face their darkest fears.

Mathew Weiner’s been spending his time since Mad Men cooking up something special. The Romanoffs is an anthology series about people who believe that they are descendants of the Romanov family, the last dynasty to rule Russia. Each episode has a different cast, story, and location—the only thing that connects them is the family they think they belong to. Mad Men alums Christina Hendricks and John Slattery make appearances, as do Clea DuVall, Kathryn Hahn, and Isabelle Huppert.

Everything old is new again. Charmed follows the lives of three sisters—Macy (Madeleine Mantock), Mel (Melonie Diaz), and Maggie (Sarah Jeffery)—who discover they are the “Charmed Ones,” powerful witches who can fight supernatural demons. Charmed originally aired from 1998 to 2006, and 20 later, I’m hoping the power of three delivers yet again.

10. The Chilling Adventures of Sabrina

It’s Sabrina Spellman’s (Mad Men’s Kiernan Shipka!) 16th birthday and that means it’s time for her to write her name in the Dark One’s book and become a full witch. Sabrina isn’t sure she wants to give up everything in her mortal life to study the Dark Arts, so it’s a good thing her magical aunties and her familiar Salem are there to help her figure things out. The Chilling Adventures of Sabrina will intersect with the Riverdale universe since they’re both a part of Archie Comics (I’m ready for that Halloween episode!), and I have been beside myself with anticipation for the series to premiere.

Heidi Bergman (Julia Roberts) is a caseworker at a facility that treats soldiers returning from war. As she works with Walter Cruz (Stephan James) to acclimate to his life again, Heidi begins to be unsure if she’s helping or hurting him. Homecoming is based on the podcast of the same name and you can expect government conspiracies, mind-altering drugs, suspense, and mystery.

Are you looking for some sexiness with your period dramas? You’ve come to the right place. Outlander follows Claire Randall (Caitriona Balfe), a World War II nurse who finds herself magically transported back to Scotland circa 1743. Claire falls in love with a hot Highland warrior named Jamie Fraser (Sam Heughan) and the two try to stay together while time travel is determined to tear them apart. Season 4 finds Claire and Jamie in the United States, trying their hand at the American Dream, while their daughter Brianna, still living in the future, learns her parents’ secrets.

The first novel in the bestselling Neapolitan quartet by Elena Ferrante is coming to the small screen! The series follows the lifelong friendship between Elena Greco and Raffaella “Lila” Cerullo, who grow up in a poor neighborhood on the outskirts of Naples, Italy, in the 1950s. When Lila’s son asks Elena if she knows how to find her old friend, Elena begins to put down everything she can remember about Lila, starting at the day the two met in primary school and the 60 years of friendship that came next. My Brilliant Friend is the first segment of a 32-part television series adaptation of Ferrante’s work, so there’s going to be much, much more of Elena and Lila to come.

Remember the 2015 prison break in upstate New York that gripped the country? Escape at Dannemora tells the true tale of two convicted murderers (Paul Dano and Benicio del Toro) who are aided in their escape by a married female prison employee (Patricia Arquette) before a manhunt ensues. Ben Stiller is directing all eight episodes, and I’m all in with that cast.