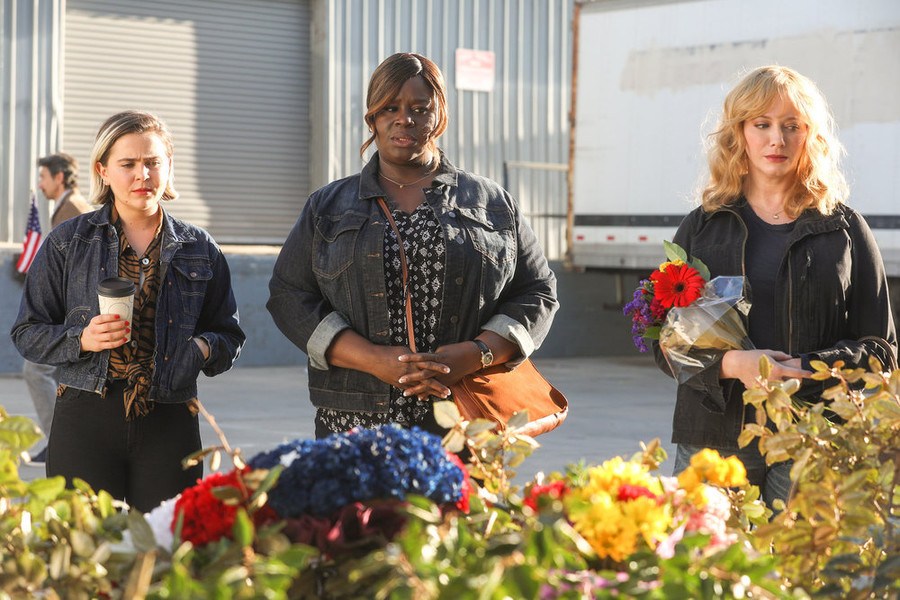 Social distancing is the new normal: We’re all being encouraged to stay six feet away from our neighbors, shelter in place, and stop patronizing nonessential businesses, including beauty and nail salons, bookstores, and libraries until at least the end of April. While COVID-19’s ongoing impact has crashed the stock market and will likely result in a global recession, Hollywood is stepping up to entertain us as we lock ourselves down: Universal Pictures, Disney, and other movie studios are simultaneously releasing films in theaters and to video on-demand, while Jasmyn Lawson and Netflix orchestrated a group watch of Beyoncé’s Homecoming documentary.

For those who have access, television and streaming services might also be a comfort in these difficult times. Since it’s difficult to keep up with the sheer amount of television in ordinary times, hopefully these days of quarantine offers a chance to play catch-up. The television lovers on Bitch’s staff have come together to recommend the shows that we’ve watched, loved, and hope will bring some peace amid uncertainty.

I never expected to love Hart of Dixie, but it has all the elements of warm comfort: low-stakes drama, a little bit of romance, and well-developed characters who can suck viewers right into their lives. New York City-based doctor Zoe Hart (Rachel Bilson) finds herself relocating to Alabama to inherit her estranged father’s practice. Hart quickly becomes a core part of the small town and its dramas, bringing viewers laughter (and tears) as she builds new relationships, acquires some enemies, and becomes acquainted with the community her father once inhabited. (You can watch the full series on Netflix.)—Rachel Charlene Lewis, senior editor

For three seasons, we’ve been treated to the ongoing antics of Monsé (Sierra Capri), Cesar (Diego Tinoco), Ruby (Jason Genao), and Jamal (Brett Gray), four teenagers navigating the violence and politics of their urban Los Angeles neighborhood. They’ve been on a season-long quest to find money that was buried after a bank heist, survived a gang-related shooting that left one of their friends dead, and tried their damndest to save Cesar from being swallowed whole by the Santos gang. And somehow, these regular teens are expected to still attend school, date, and navigate ordinary teenage angst. On My Block is one of Netflix’s best offerings: It’s the perfect blend of humor, suspense, and just plain old entertainment.—Evette Dionne, editor-in-chief

I’ve been a Project Runway stan since before we used the term “stan,” but watching it slog through recent seasons with needlessly drawn-out episodes, uninspired challenges, and mortifying product-placement directives hasn’t been easy. Netflix’s new series Next in Fashion feels, in many ways, like a clear-eyed update for the influencer generation: a competition show that recognizes fashion as a deeply fickle industry driven less by what you can make than by whom you can sell it to. The 18 contestants come from around the globe, and almost all of them are already well established, from the uncredited designer for celeb-streetwear labels FUBU and Rocawear to the creative director for an Italian label whose aesthetic can only be described as Lord of the Rings by Versace. Hosts Tan France (of Queer Eye fame) and Alexa Chung (of somehow-still-being-an-It-girl fame) are high energy, everyone prefixes their design aesthetic as “luxury,” and there’s enough real tension in the challenge parameters that producers don’t need to manufacture it. For a dose of over-the-top escapism, Next in Fashion makes it work. (You can watch the entire series on Netflix.)—Andi Zeisler, cofounder

You had to see this one coming: Steven Universe is one of the most beloved animated series of all time. In 2019, the series won a GLAAD Media Award for Outstanding Kids & Family Program; it’s been nominated for six Emmy Awards and five Annie Awards, respectively; and it has a huge fandom that’s steadily growing as creator Rebecca Sugar unveils offshoots from the original series. Steven (Zach Callison) is being raised by the Crystal Gems, a group of aliens who fled their planet during a war. Though there’s a heavy origin story, the show beautifully balances levity and thoughtfulness. Steven is just as likely to spend an entire episode searching for his favorite ice cream or waiting for a hamburger-shaped backpack in the mail as he is to reflect on the loss of his mother, his role in society, and whether he’s a good or bad person. Ultimately, Steven Universe offers a wild world filled with adventure and endless amounts of love. (Almost every season is available on Hulu.)—RCL

Though Jane the Virgin ended in July 2019, it’s still worth starting from the beginning. Jennie Snyder Urman’s adaptation of the Venezuelan telenovela Juana la virgen has an impossible premise: Jane Villanueva (Gina Rodriguez), a 23-year-old virgin who dreams of being a teacher and writer, becomes pregnant after a medical-office insemination mix-up. Over the course of five seasons, we watch Jane as she navigates her relationships with her ambitious mother, Xiomara (Andrea Navedo) and her religious grandmother, Alba (Ivonne Coll); falls in and out of love with Michael (Brett Dier)—the man she’s engaged to when she becomes pregnant—and her son’s father, Rafael (Justin Baldoni); and faces off against Rose (Bridget Regan), an evil face-changing villain once married to Rafael’s father but now in love with his sister, Luisa (Yara Martinez). Jane the Virgin is a telenovela with many twists and turns, but it’s also a heartfelt dramedy about the importance of family and the beauty of both giving and receiving love. (You can watch the entire series on Netflix.)—ED

If you like a good scam story, HBO’s new six-part docuseries about the period of more than a decade, beginning in the 1990s, when the McDonald’s Monopoly game—the fast-food chain’s most successful promotion of all time—was almost entirely rigged. The originators of the scheme, which involved procuring and selling off the highest-value game pieces, was intended to exploit a loophole that would impact only the corporation itself; what McMillions shows, however, is that there’s no such thing as a victimless crime. Interviews with several of the conspirators—some who knew exactly what they were involved in, others taken in by friends and family members—paint a picture of people who, in many cases, were facing financial precarity that was exploited to serve others; it’s easy to see why the scheme was alluring, and equally easy to see how it went terribly wrong. McMillions includes a colorful assortment of characters who tread a very thin line between entertaining and abhorrent—an FBI agent whose delight at nabbing the scammers hasn’t waned at all, the brother of a mobster who is really into the fact that his brother was a mobster—but the human toll of the years-long scam, embodied in interviews with the son of its mastermind, is also more heartbreaking than you might expect. (All episodes are available on HBO On Demand.) —AZ

In many ways, the Johnsons are an ordinary Black American family: Advertising executive Andre Johnson (Anthony Anderson) and anesthesiologist Rainbow Johnson (Tracee Ellis Ross) are raising five children in the Los Angeles suburbs. What makes Black-ish entertaining, however, is the juxtaposition of Dre’s insistence on using over-the-top antics to teach their children Black history and cultural traditions and Bow’s quiet resistance, which often pushes Dre to apologize for doing too much. The Johnson children—Zoey (Yara Shahidi), Junior (Marcus Scribner), Jack (Miles Brown), and Diane (Marsai Martin)—also bring the funny with their distinctive personalities (Diane, in particular, is hilarious as the sinister sibling who’s always plotting against her family) and their covert plans to teach their father as much as he teaches them. The universe of Black-ish has expanded to include two spinoffs, Freeform’s Grown-ish and ABC’s Mixed-ish; but six seasons in, the original is still the best.—ED

If you enjoy watching shows that offer a time-out for your brain, then tune into Netflix’s The Circle. On this one-season series hosted by comedian Michelle Buteau, strangers compete to see who’s the most “real”; the catch is they’ve never actually seen one another in real life. Instead, they build digital profiles, communicating with each other via DMs and group messages, participating in challenges, and, ultimately, voting off the cast members they believe are faking their identities. And yes, to keep things interesting, there are several catfish in the mix. The contestant who can prove they’re “the most authentic” wins $100,000, so the cash prize keeps the stakes high and the strategy increasing.—RCL

While COVID-19’s ongoing impact has crashed the stock market and will likely result in a global recession, Hollywood is stepping up to entertain us as we lock ourselves down.

The dramedy Good Girls has been compared to Breaking Bad, for good reason: Both series illuminate the ways in which economic scarcity creates a desperation that can drive otherwise ordinary, law-abiding people into crime. In Good Girls, a combination of wage stagnation, rising living costs, and multiple crises force three suburban mothers—Beth Boland (Christina Hendricks), Ruby Hill (Retta), and Annie Marks (Mae Whitman)—to rob a local grocery store. It’s supposed to be a one-time heist to help the women get out of debt, but the $500,000 they steal belongs to crime boss Rio (Manny Montana) who requires them to transport counterfeit cash to reimburse him. Suddenly, Beth, Ruby, and Annie are in the game full-time, trying to elude authorities and avoid Rio’s wrath. Good Girls can be anxiety-inducing as the stakes get higher and the violence increases, but it’s also entertaining as hell. (You can watch the first two seasons on Netflix and the third season on Hulu.)—ED

Magazine publishing doesn’t work even remotely the way it’s presented on The Bold Type, but that’s exactly what makes the show such a great distraction. The series, which is inspired by the career of former Cosmopolitan editor-in-chief Joanna Cole, follows three best friends—Jane (Katie Stevens), Kat (Aisha Dee), and Sutton (Meghann Fahy)—who all work at Scarlet magazine. They’re a fun, relatable trio who should’ve been fired from their jobs ages ago: They’ve bent and broken nearly all the rules of both publishing and basic professionalism, but somehow, they always land on their feet. They fall in love, experience breakups, land and (and lose) dream jobs, and hide away in a fashion closet to discuss it all. While the show leans a little too hard into being “woke” at times, it’s overall an easy go-to. Plus, Kat’s bisexuality offers a chance for some great queer sex scenes, and Sutton remains one of the funniest characters on television. (You can watch The Bold Type on Hulu.)—RCL

Ava DuVernay’s adaptation of Natalie Baszile’s 2014 novel follows the Bordelon siblings, Nova (Rutina Wesley), Charley (Dawn-Lyen Gardner), and Ralph Angel (Kofi Siriboe), as they fight to save their father’s Louisiana sugarcane farm in the aftermath of his sudden death. Queen Sugar grapples with a number of different issues, including colorism, generational trauma, intimate-partner violence, chattel slavery, and mass incarceration, but its adept storytelling balances the gravity of these topics with compelling plot lines that keep the show from feeling das heavy as it could. It’s worth noting that DuVernay has used Queen Sugar as a vehicle for female directors, who have exclusively helmed every episode over its four seasons. (Queen Sugar is also available on Hulu.)—ED

Read this Next: 11 Podcasts Feminists Should Listen to While Social Distancing

by Bitch HQ
Since your tastes are as varied as ours, we hope there’s something in here for everyone.