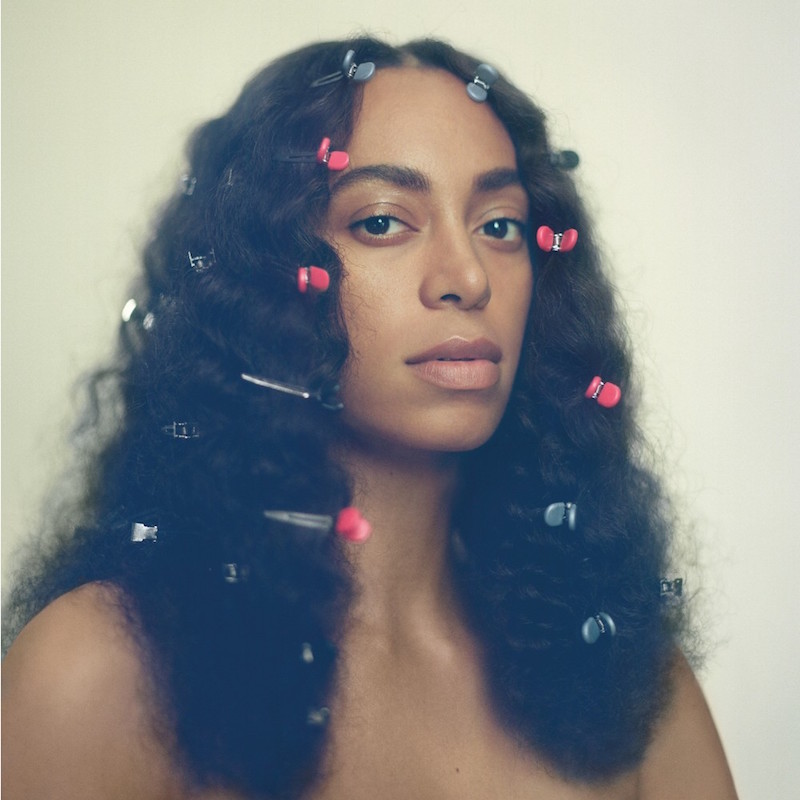 Solange Knowles on the cover of A Seat at the Table (Photo credit: Saint Records)

Four years have passed since Solange released True, a seven-song EP that earned critical acclaim and fan raves. While True seems to focus on the highs and lows of heartbreak and misconstrued relationships, her latest album, A Seat at the Table, released last week, is a direct response to the institutions of anti-Blackness and white supremacy that pollute our country’s cultural climate. The album manifests a great deal of trauma like specters, but the shared pain of history is never overbearing or all-consuming. The album’s 21 songs fluctuate in tone—the first track, “Rise,” is a piano-lead, synth-heavy funk song inspired by the protests calling for the end of police killings in Ferguson and Baltimore.

On the second track, “Weary,” the tone abruptly shifts into a feeling of defeated recognition. Like any talented memoirist, Solange unveils vulnerabilities and reopens wounds with control and precision. The personal is political and the political is personal. There is a fair amount of hope and joy and pride infused in A Seat at the Table, a reminder that perseverance often leads to triumph. That sense of self-sustained motivation is echoed in the interludes throughout the album, voiced by Master P. The No Limit Records founder provides the album’s narrative foundation and is its muse. In an interview with Fader, Solange said Claudia Rankine’s Citizen helped shape the album. “Claudia was someone who directly inspired my writing because her poetry cuts through in a really unique way. She leaves certain things up for your interpretation, while also being very direct. I identified with that so much…I want people to have a personalized experience, but I want my role to be clear within that.”

This poetic approach is evident in the directness of the lyrics, which portray Blackness as a means of refuge. As echoed in the song, “F.U.B.U.,” Black culture, so intertwined with her heritage, her family history, and her lived experiences, was not meant to please or appeal to everyone. In the song “Don’t Touch My Hair,” a collaboration with the artist Sampha, Solange extolls a demand that’s familiar to many Black girls and women, especially those who must navigate white spaces on a daily basis. Solange argues against the notion that “it’s just hair.” For Black girls and women, wearing natural hair is a radical choice that can result in being expelled from school or getting fired from a place of employment. Not only is touching a stranger’s hair without permission a violation of personal space and basic respect, it is an example of othering.

Enduring the unwanted label of the “other” can cut to the bone and eat away at the soul. When we talk of trauma in the Black community, how often do we think about recovery, of psychic protection, and safeguarding sanity? It seems that every day, the once-vibrant lives of Black men, women, and children are reduced to hashtags. Speaking to NPR, Monnica Williams, the director of the Center for Mental Health Disparities at the University of Louisville, said, “We hear in the news about African Americans being shot in a church, and this brings up all sorts of other things and experiences…Maybe that specific thing has never happened to us. But maybe we’ve had uncles or aunts who have experienced things like this, or we know people in our community [who have], and their stories have been passed down. So we have this whole cultural knowledge of these sorts of events happening, which then sort of primes us for this type of traumatization.”

Featuring Q-Tip, “Borderline (An Ode to Self Care)” expounds the importance of self-care, of taking a break from the horrors of the outside world. Solange sings, “Baby, it’s war outside these doors, yeah/ A safe place tonight/ Let’s play it safe tonight.” In addition to the voiceovers provided by Master P, Solange includes interludes of her mother, Tina, and her father, Mathew. Solange’s older sister, a.k.a. Queen Bey, has previously used both parents for creative inspiration, namely in the track “Ring Off,” which is about Tina’s divorce from Mathew. A Seat at the Table casts both parents as oracles, Tina lamenting about the absurdities of reverse racism and Mathew offering a window into the not-so-distant past of school integration in the South. In “Tina Taught Me,” Tina says, “It’s such beauty in Black people, and it really saddens me when we’re not allowed to express that pride in being Black, and that if you do, then it’s considered anti-white.” This tension is blatantly played out concerning the Black Lives Matter movement. Mathew’s interlude, “Dad Was Mad,” recounts going to a newly integrated school. He says that in addition to angry parents shouting and throwing cans at the Black students, the KKK showed up to protest. He says, “We lived in the threat of death every day.” It’s a statement that resonates with present conversations involving police brutality and the country’s legacy of systemic and violent racism.

Black pride doesn’t have to be born from suffering and despair. It can be sourced from Black resistance. Later in her interview with the Fader, Solange explained that she feels it was “really healing” to hear these stories about the history of Black resistance. “We can build and create opportunities for ourselves: We don’t have to ask for permission.” In the Langston Hughes poem, “I, Too,” the poet declares, “Tomorrow, I’ll be at the table/ When company comes.” There isn’t a note of hesitation. It’s an affirmation of a vision coming to fruition. Blackness does not require permission to exist. Solange said of the album, “It’s not going to be pretty, it’s not going to be fun, you may not get to dance to it, you’re not going to breathe easily through it, but that is the state of the times that we’re in right now. It’s my invitation to actually open up those doors and to have that voice, get messy and lay out my truths and stand firm in them.” A Seat at the Table doesn’t bow to the pressure of being palpable for all listeners. Instead, it’s a place of comfort and solace, like the feeling of recognition shimmering between the locked eyes of two Black people across a crowded, white-washed room.

Relevant: All Hail the Queen?