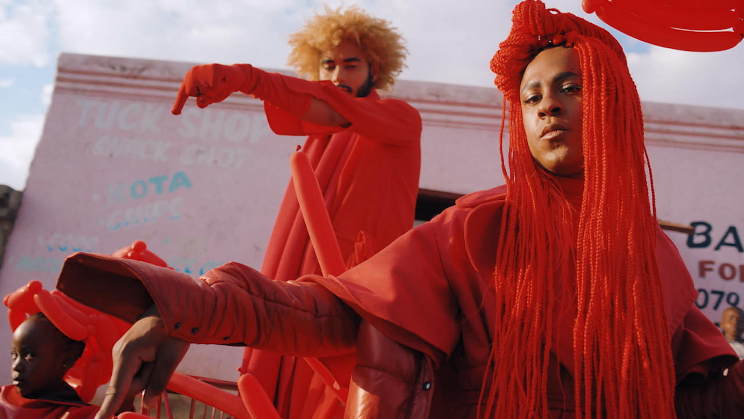 The documentary Out of this World is an immersion into Johannesburg’s queer artist community produced by i-D; directed by queer filmmaker Matt Lambert; and hosted by rapper, artist, and fashion innovator Mykki Blanco. I’ve been a fan of Blanco’s since stumbling on his genre-defying music on SoundCloud a year ago, and have followed both his musical output and his social media since. As a Black, genderqueer artist, Blanco is deft in his critiques of the power systems that try to constrain the lives of Black queer folks—which makes him the perfect person to offer a connection to the folks queering up—and speaking out about—their lives.

In the first episode of the three-part documentary, Blanco explores queer identity with “born-free” South African queer artists and LGBTQ activists—those who were born and raised post-apartheid. We get glimpses of the intimate, loving moments between Bradley Kgotlelelo and Nkulsey Masemola, a talented young couple (a dancer and model, respectively) who share their experiences with queer visibility in Johannesburg, and break down the colonial, religious roots of South Africa’s very public animus toward LGBTQ communities. Elsewhere, Blanco meets the South African artist-activist Umlilo on a “Femme Walk” through Johannesburg. Unapologetically honest and open about his own struggles with queer erasure, Blanco establishes himself as a compassionate host who puts both participants and viewers into a space that acknowledges the common experiences of Black queer folks.

In episode two, titled “South Africa’s Queer Fashion Designers and Trans Activists Subverting Masculinity,” Blanco meets Johannesburg designer Rich Mnisi and model Luke van der Burg. Walking around Mnisi’s home and a local fabric store, they discuss their mothers’ and femme family members’ impact on their ideas of both femme fashion and community. Blanco’s conversation with queer artist Lady Skollie is equally enlightening: Skollie explores the tension of art that serves as a form of therapy as creators reckon with the dearth of efforts to materially improve the lives of Black queer women and femmes.

And episode three’s beautiful finale finds Blanco meeting with FAKA, the groundbreaking performance-art duo of Fela Gucci and Desire Marea, to explore queer erasure and celebrate their communities through their work. As Blanco heads out for a final kiki with Fela, Desire Glow, and Bradley and Nkulsey—at FAKA’s club night, “Cunty Power,” there are scenes of them donning their performance wear, hyping each other up, and dancing free in femmeness. It’s a beautiful portrait of the magic present in both bodies and art, one that incorporates the beauty of the indigenous landscape that has nurtured art and activism in past and present.

Many Black Americans have grappled with the displacement caused by centuries of slavery, continued forced diasporas, and a global system of racial capitalism reliant on the destruction of black communities. In that context, Blanco’s trip to South Africa—his first time anywhere in Africa—comes across as a healing, spiritual experience. In an almost wondrous tone, Blanco says, “I am 31 years old, African American, and there I was… on the continent in which civilization as we know it was born, the land which birthed my race, for the very first time.” It’s a reminder that our histories literally shape who we are and our connections with those who came before us; in this consistently anti-Black world, many belonging to the Black diaspora can’t trace their family lineages the way white families often can. But Out of This World presents an alternative: It asserts that Black queer artists can find a home in each other, in resistance, and in their creative work—a collective battle against the queer erasure and censorship enforced by patriarchal and heteronormative societies. 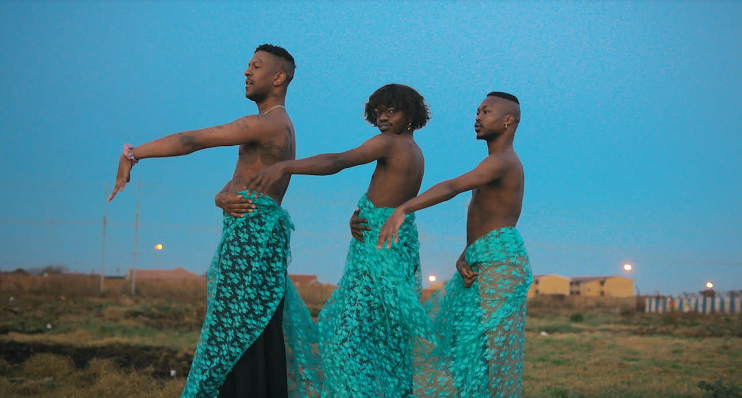 Toward the end of the film, Blanco reflects on his experience in Johannesburg, noting:

“It gives me hope that these are the people actively challenging the narratives around queer identity and receiving international attention for their art. South Africa as a country and Africa as a continent have been colonized and commodified, but these creatives I met are refusing to be colonized by the western gaze. These artists are living their own lives and creating their own destinies—whether the rest of this world is watching, or not.”

Throughout the film, Blanco imbues this understanding of matrices of oppression into the questions he asks and the conversations he fosters, and his eagerness to collaborate with his fellow Black queer artists is met with an equal degree of of camaraderie and love. The truly astounding collective of Black queer artists featured here not only cement the film as an authentic exploration—rather than a voyeuristic and superficial survey—but also add their own dynamic understandings of Black queerness.

FAKA’s Desire Marea asserts that “For as long as we’re here, our queerness is the reason we’re great. It’s not a side thing… we’re amazing because we are queer. A lot of queer history has been robbed from us.” It’s an affirmation of queerness as peak Blackness, Blackness without the limits, restraints, or even time to pay attention to binaries created and enforced by white settlers. Blackness becomes not merely an ideological platform or a social construct, but a worldly and ethereal embodiment of resistance, resilience, and love. “I know what it feels like to have people to tell you or to assume that you’re not strong,” says Blanco. “I know what it’s like for people to assume that you’re not capable. I know what it’s like to have people to look at you, as an HIV-positive person, and think you’re not worthy of excellence. But you are fucking worthy of excellence!”

Out of This World is an optic and aural bath, full and warm with the vitality of Black queerness, ready to wash over descendants of Black queer ancestors who lived their truths in the face of settler-colonial apartheid states. Watching this film was exactly like a sound bath I experienced during a recent Kundalini yoga session—then and now, my body lays taut after the wear of fighting systems of domination. With this film washing over me though, I could, for some moments, feel nothing but the cleansing vibrations of ancestral knowledge in artistry, finding a healing form of resistance interwoven into the stitches that make up Black queer diasporic identity.

by Amy Lam
A white writer is dished out advice on cultural appropriation while wearing a tiny sombrero? Hmm...