Freedom DreamingBlack Southerner Organizers Got Something to Say 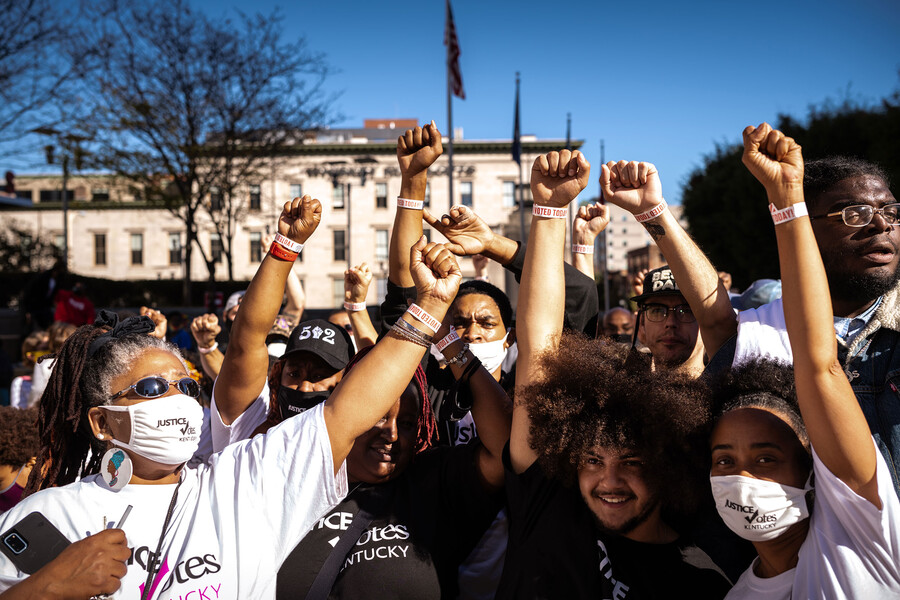 In August 1964, Ella Baker and Fannie Lou Hamer traveled to the Democratic National Convention in Atlantic City, New Jersey, to ensure the centrist Democratic party recognized the Mississippi Freedom Freedom Democratic Party, their newly formed Black political party. At the beginning of Hamer’s testimony before the credentials committee, President Lyndon B. Johnson requested immediate airtime in order to cut the audience for Hamer’s speech. After the Mississippi Freedom Democratic Party negotiated two symbolic at-large seats during the convention, they staged a protest during the final day of convening. Hamer along with delegates from across Mississippi, including college students and sharecroppers, staged a peaceful protest to get what was owed to them. “Is this America, the land of the free and the home of the brave, where we have to sleep with our telephones off the hooks because our lives be threatened daily, because we want to live as decent human beings, in America?” Hamer said during her testimony.

In the 56 years since Johnson interrupted Hamer’s speech, it has often felt like the political discourse in the United States has remained in 1964 and as if Hamer, an understated cooperative sharecropper and strategist, is still whispering freedom dreams in the ears of organizers all across the South. In the 2020 presidential election, it seems, the fruits of her labor are finally coming to bear. As 2020 election results began rolling in the late evening of November 3, journalists and political pundits closely followed the blue wave taking place across Atlanta, Detroit, Milwaukee, Philadelphia, and other urban cities and their neighboring counties while simultaneously sidelining the red mirage that has maintained its grip on rural areas since law and order Republicans birthed the Reagan era. Now that Joe Biden is president-elect (and the Senate will remain up for grabs until January 2021), it’s clearer than it has ever been that the country’s widely accepted illusion of superior morality must be dealt with head-on.

This election was won by Black, Indigenous, and Latinx voters who, beyond voting, have been mobilizing against stop and frisk laws, abolishing cash bail, and recognizing sovereign rights in swing states. We don’t live in two Americas; there’s only a single America, one where Black and Brown people have been living under state repression since this land was colonized. Yet, pollsters, political pundits, and lobbyists have been unable to grasp and understand the resilience of Black people—Black women specifically—who have been in every county across the South mobilizing Black voters long before this election. Lead election journalist and organizer Anoa Changa knows all too well how national media disregards the importance and impact of local Black organizing. “White space is not talked about in the same way [our] spaces are,” Changa told Bitch. “They are not talking about Iowa or Idaho in the same way they’re talking about Florida, Georgia, and North Carolina. It’s very dismissive and it doesn’t drill down to look at all the things that are happening.”

Black organizers, many of them women, queer folks, and trans folks interchangably are canvassing, phone banking, and building deep political power in their communities to use the voting booth as a step and never a final destination for Black liberation. Organizations like SONG, New Georgia Project, Mijente, GLAHR, Working Family Party of Georgia, and Poder Latinx have been doing this work for years—and they’re seeing major returns. No one should be surprised that the largest voter turnout appears to be happening primarily in the South among young people, which will likely turn Georgia blue for the first time since 1992. Across the South, in historically conservative states like Alabama, a coalition of young Black people, white liberals, and a burgeoning labor movement have been working tirelessly to chip away at the centuries of racial terror that has gripped the political process.

One such organizer, Dillon Nettles, the policy and advocacy director of Alabama’s branch of the American Civil Liberties Union, has been doing mutual-aid work, registering voters, and working on the #FreeThemAll campaign since 2015. “In every election cycle, Black and queer Southern organizers are confronting not only voter suppression and our right to the ballot but our right to exist on the very land that holds the legacies of ancestors that built a country that only saw them as property,” Nettles told Bitch. “We know our futures aren’t tethered simply to electoral outcomes, but we also understand that we are building to overcome hostile governments that will deny our hopes, our joy, our children, and our own breath.” Despite their work, voter suppression continues to run rampant in the United States, including in Southern and midwestern states.

The legacy of voter suppression began with the white terrorist work of klansmen and dixiecrat politicians invested in holding power from the Black community. Though the 1965 Voting Rights Act was supposed to stave off voter suppression, we have seen the rise of obstacles, including voter IDs, the chipping away of same-day registration, and the announcing of exact match laws since the Supreme Court ruling gave the GOP full reign to suppress the growing Black and Brown vote through these measures and others. “Your prediction can not predict the dedication of Black and Brown organizers,” Changa said. “They don’t respect our work, our ingenuity, or our strategy. And you know what we don’t need them to respect us but they need to come correct and listen to us.”

Black organizers, many of them women, queer folks, and trans folks interchangably are canvassing, phone banking, and building deep political power in their communities to use the voting booth as a step and never a final destination for Black liberation.

There’s nothing new about media collapsing the nuance of racial politics and Black organizing power of the South: In 2018 Mary Hooks, then executive director of Southerners on New Ground, and Nikema Williams, who’s now a member of the U.S. House of Representatives, were arrested during a count every vote rally in the aftermath of the disputed gubernatorial election between Brian Kemp and Stacey Abrams. What followed was a focus on Abrams’s efforts to register Black voters in Georgia, but this coverage lacked valuable context on how the movement for Black lives as well as other Black women organizers and Black youth built a coalition to turn out the largest Black vote in Georgia’s history. Abrams’s story has been treated as a special case of luck and ingenuity, rather than the years of strategy and movement building it actually is. By and large, mainstream press has flattened the narrative instead of failing to acknowledge the continued surveillance, punishment, and harm Black organizers have experienced, even from Black women mayors in supposedly progressive cities.

Hamer’s legacy of undying love and trust in Black people is evident in her strongest will as an organizer. She knew instinctively that Black people had everything that they needed. “The time has come now when we are going to have to get what we need ourselves,” Hamer said in 1969. “We may get a little help, here and there, but in the main, we’re going to have to do it ourselves.” As we ring in a new president, a new administration of politicians who say that they work for the people, and a new legacy of a global imperialist regime, we often forget that this country is honored to sit with the brilliance of Black political power even as it refuses to acknowledge our humanity time and time again.

As legacy publications wrap up their election coverage and head back to media hub cities such as New York City, Chicago, and Los Angeles, local organizers, journalists, and cultural workers will continue fighting and telling their stories. “The reporting needs to catch up to what’s really at stake for people in democracy instead of being worried about being scared of both parties,” Changa said. “It doesn’t hit their radar until moments like this.” This moment calls on legacy publications and the journalists they employ to reorient their focus. Instead of repeating the past, they can elect to highlight the growing organizing movement that’s mobilizing working-class communities every day to fight for their dignity. The fight for liberation lives on past electoral work and into the abolition of prisons, policing, and surveillance. They’re the pulse of the new movement.

by Izzie Ramirez
The rhetoric folks use when talking about the South has got to stop.
by Clarissa Brooks
View profile »