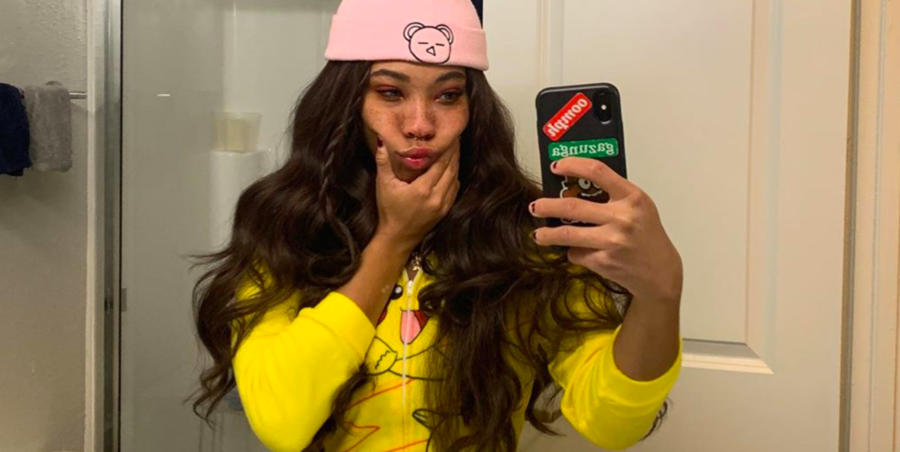 Kiera Please, a Black woman artist and cosplay influencer from Virginia, joined TikTok in summer 2019 because she felt there was less pressure to perform perfectionism (as is often the expectation on Instagram, YouTube, and other platforms where creatives build neat and consistent online brands). Before becoming a TikToker, she had established a well-known presence across social media with more than 94,000 followers on Twitter, more than 650,000 followers on Instagram, and more than 34,000 subscribers on YouTube. Her first video, posted in September 2019, titled “Me Finally Meeting a Nice Guy,” was about seeking her best friend’s approval before trusting someone she likes. In the skit, Please plays three characters: herself, the guy, and her best friend. She lip-syncs a dialogue from an uncredited sound: a dialogue between a boy and a man who are about to play a game.

This particular sound is popular with TikTok users who create videos of themselves playing video games. Please takes this format a bit further, using interactive text bubbles (a common TikTok video style) to narrate each scene to make it her own. The clip went viral and since then, the 24-year-old has amassed more than 142,000 followers. Beginner’s luck motivated her to post cosplay content. In one TikTok, she transforms into Kim Possible and lip-syncs a scene from the cartoon. While many reactions ranged were supportive (one user commented, “This is MY Kim Possible”) she also received racist comments, with one user commenting, “Kim Possible isn’t Black.” “That’s something I experienced early on Instagram,” Please explained to me over the phone. “So I didn’t expect that to happen on TikTok. It sucks, but I try not to pay attention to it.”

In the 2010s, Black women such as Tarana Burke, Issa Rae, and Cardi B did just that with social media: They launched social movements, books, movies, television shows, record deals, jobs, and lucrative startups. The next generation is continuing this tradition on TikTok, a lip-syncing app that meshes Vine’s snappy comical videos with Tumblr’s progressive spin. Given the prevalence of Black women’s influence and mistreatment on social media apps, it is important to look at Gen Z and younger millennials’ experiences on TikTok as storytellers and cultural critics. To explore this space, I spoke with five Black women, Nikaila A., 19; Zira Brown, 20; Tilda Harris, 23; Kiera Please, 24; and Bria Jones, 26, who have gained tens to hundreds of thousands of followers and millions of views on the app. They each have their own unique content style and messaging and see TikTok as the go-to outlet for expressing themselves. But they agree it isn’t consistently a safe space for Black women.

Each of these content creators described expecting backlash in their comments section, especially when creating videos that center Black women’s experiences. One popular hashtag among Black women is #blackgirlcheck, which has the description “Be proud of who we are!” Jones, who’s from Kansas City, Missouri, has been posting beauty and fashion tutorials and relatable Black girl content to her 125,000 followers since joining in June 2019; she used the hashtag to share her August 2019 post, “Things Black Girls are Tired of Hearing.” Using interactive bubbles to list out questions and comments that annoy her, she writes, “Can I touch your hair”; “I’d love to try brown sugar”; “You’re pretty for a Black girl.”

“I think by verbally sharing struggles and wins in society we are connecting in knowing we aren’t alone with what we deal with,” Jones shared in an email. “I’m much older than most of these users and to be 16 and have this app could have changed my mindset completely at a young age where I had mostly white friends and didn’t understand why I was so ‘different’.” Initially, she received support from Black women and non-Black women, but that changed as her videos reached viewers outside of her core audience of Black viewers. “My favorite comment is ‘Why does everything have to be about race?’ and my response is ‘because it is still about race’.”

This sentiment can also be applied to TikTok’s “For You” page, which users of color have criticized for being racially biased. According to TikTok’s Apple app store description, the page is “a personalized video feed specifically for you based on what you watch, like, and share,” and on some levels, it does live up to its promise: In the first 48 hours of liking and following TikToks by Black girls or with a political theme, my “For You” page mostly fed me that content. “Everyone’s ‘For You’ page is different and there have been times when mine seemed very whitewashed,” Jones wrote. “I think that it comes down to people subconsciously not interacting with women of color’s content, therefore the algorithm is not feeding you more of that content.”

“Someone once called me a Black fat ugly monkey and that I should stop making TikTok videos.”

TikTok hasn’t publicly spoken out about how this page works, which has left users to come up with their own theories, Vice reported in August 2019. We do know that TikTok has the power to choose what shows up and has exercised it. The app’s moderators were told to block posts from users with disabilities, queer, and fat people from the “For You” page because they were at high bullying risk on the app, Netzpolitik.org reported in December 2019. Since the late 2010s, Black women researchers such as Joy Buolamwini and Timnit Gebru have highlighted the importance of coders implementing standards and regulations for algorithms that prevent the automation of discrimination. Tilda Harris, from Lagos, Nigeria, agreed with the sentiments shared by Jones and Please, but of the women surveyed was the only to report that the extremely hateful comments she received pushed her to take a break from the app.

Harris, who has more than 203,000 followers, joined TikTok in April 2019 to take her mind off of a breakup. She makes videos about loving her curvy body and dark skin based on trending hashtags. Her most popular post is a lip sync video to Alessia Cara’s song “Here,” which she said had 3.5 million views. (The song is one of the most lip-synced sounds on the app.) But with more visibility came hatefulness. “Seventy percent of the hateful comments I get on TikTok are about my body,” Harris said in an email. “They usually say it’s fake or that I’m using my body for clout, likes or that I am fishing for compliments and the other 30 percent is about my skin color and my race,” she expressed. “Someone once called me a Black fat ugly monkey and that I should stop making TikTok videos.”

Zira Brown, a TikTok comedian from Tallahassee, Florida, with one million followers, adds that some of the worst comments come from younger users, “9, 10 or 11-year-old” trolls. TikTok has a version for users under 13 who can only “access curated, clean videos: They can’t comment, search, or post their own videos,” according to a Common Sense Media guide on TikTok for kids. However, the report recognizes that kids can enter a false birthdate to get around the age limit for full access to the app, a problem that exists across social media platforms. When they do receive positive attention from non-Black women on TikTok, Black women are highly skeptical of the source.

This is particularly true of white male TikTok users who post videos describing their desires to date Black girls. “You’re using Black girls for clout,” is a common response in the comment section, meaning the love isn’t genuine and is instead being expressed solely to get engagement. “I had two videos about a white boy [TikTok creator] who always had the words ‘I love Black girls’ in his videos and those videos would get the most likes for whatever reason. I am still confused about [it],” Nikaila A., 19, from New York, who has a following of more than 69,000, wrote via email. She’s been using the app to primarily post lip-sync videos since 2015, when it was called Musical.ly. “There is a difference between praising Black women because you love how they look, act, etc. and just consistently bringing up the fact that you love Black women because you think you’re different and you think that makes you special from everyone else.” 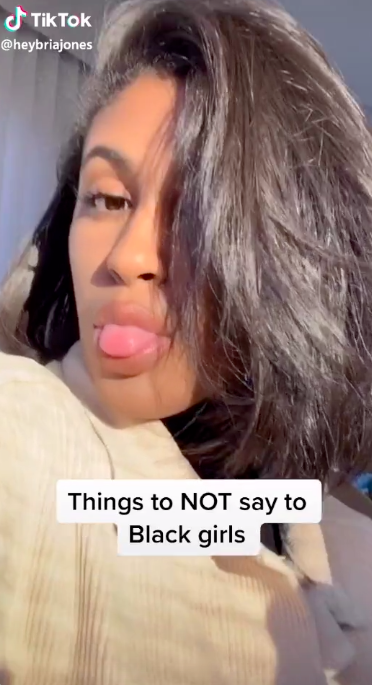 The issue of using Blackness for likes also extends to the sounds users select when making TikToks. Music, dialogues from films and TV shows, interviews, or voices from viral videos are all borrowed to make these videos. All the TikTok creators I interviewed agreed that sounds from Black culture are popular on the app, especially hip hop music, in which rappers commonly use the n-word. There are regularly controversies around white TikTokers lip-syncing the n-word, so much so that there is a popular hashtag #nwordpolice in which mostly Black users monitor these incidents. One TikTok star Christian Burns was called out for saying it during a Live with his followers on the app. “It’s the best way to get negative publicity,” Brown says. “If you use it you will get views for it. I do believe that it’s getting done on purpose because everyone wants to go viral in this day in age.”

Audio can be uploaded on TikTok without credit or permission from the original source, creating another issue with sound usage. YouTuber-turned-actress Jahkara J. Smith tweeted that her voice was stripped from her 2017 viral makeup tutorial “Contouring 101” without permission and used widely on TikTok. In December 2019, she called out user @averyhoneycutt for capitalizing off her voice. “Babygirl stripped my audio, garnered over 300k views with it on TikTok, and then tried to make her own YouTube channel….Y’all be rolling over Black people like we’re nothing,” Smith tweeted on December 16. Smith later wrote: “Deleting my app for a bit but I hope people are aware that this is bigger than a stolen audio clip: this is about the aftermath, about boundaries, about possessiveness, disrespect and POC creatives. Someone must be [held] accountable..” Smith didn’t respond to a request for comment.

As more content creators turn to TikTok to build their brands and tap into influencer marketing, Smith’s concerns will become even more prevalent. Recently, high-end fashion house Celine hired Noen Eubanks, an 18-year-old white TikTok star with 9.4 million followers, to be the face of a new campaign. Will Black girls on TikTok receive the same opportunities? After all, these creatives aren’t just on TikTok for fun; they, ultimately, desire to expand their careers beyond the app. So far, Brown said she has received free products in exchange for promoting an acne brand on her page and is working to land more monetary deals; EA Sports sponsored a post on Please’s page; and Jones has received products from an online women’s boutique in exchange for posts.

Online, there’s a long history of the theft of Black women’s ideas, social-media trends, and even their faces and voices, as is the case with Smith. In the future, white popular faces will benefit from contributions made by Black people, particularly Black women, as long as cultural appropriation goes unchecked in the wider culture. Given that Black women are already vulnerable to erasure online, this will continue to impact what opportunities they’re able to tap into in the future. “It would be great if TikTok consistently created trends that promoted diversity, inclusivity, and understanding of people who are different,” Jones says. “I put the responsibility on the creators of the app.”

Read this Next: How @EmoBlackThot Infiltrated Black Women’s Safe Spaces 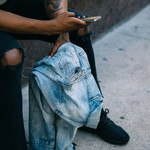 by Victoria Gagliardo-Silver
At times, she seemed too good to be true. And now we know she was: @EmoBlackThot was not our dark-skinned digital big sister; in fact, she wasn’t a sister at all.

From Prodigy Activist to Young-Adult Author