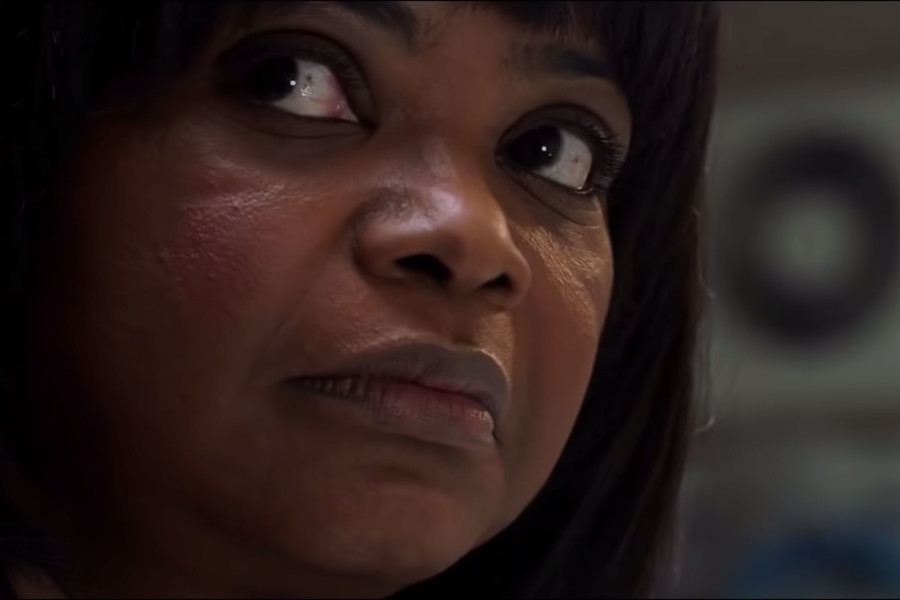 We meet Sue Ann Ellington (Octavia Spencer) as she’s walking one of her veterinary patients down the street and minding her own damn business. When she’s stopped by a van full of high-school kids who ask her to buy them liquor, she initially demurs. But when she sees the logo on the side of the van and identifies the driver, Andy (Corey Fogelmanis), as the son of an old classmate, Sue Ann reconsiders. She buys the teens their liquor and swears them to silence, and as she waves the kids in the van away on their drunken binge, Tate Taylor’s new horror film, Ma, begins building up at a terrible speed.

It’s clear that Sue Ann has a history with Andy’s father, Ben Hawkins (Luke Evans), and when she places an anonymous call to let Ben know his underage son is out getting loaded, Spencer’s expressive face positively vibrates with anger and pain. Her encounter with Andy and his friends bring bad blood from Sue Ann’s past rushing back: They are the popular children of her own high-school bullies, and she quickly fixates on them. When the teens once again approach Sue Ann for booze, she’s ready. She has them follow her to her house deep in the Ohio woods to party in her basement.

Soon enough, Sue Ann has established the basement as the teens’ clubhouse, and has also found the kind of acceptance she craved in her own high-school years. She swigs liquor, dances, and even comes to accept her titular nickname, bestowed by Darrell (Dante Brown), the only other Black member of the group. Playing on the trope of a mammy figure who takes care of white kids while their parents are working (or having affairs), Sue Ann’s housemother role is an extension of the rest of her life as a caretaker for others, including her veterinarian boss, Dr. Brooks, (Allison Janney) and her own sick daughter, Genie (Tanyell Waivers). As Sue Ann is accepted into the popular kids’ clique and her home becomes a hub for illicit social activity, she finally feels like she belongs. But the party can’t last forever.

A deeply religious woman, Sue Ann only has a few house commandments: No spitting on the floor, no drunk driving, and—most important—“Don’t make me drink alone.” It’s only a matter of time before her new high-school pals break those rules, and as they do so, one by one, the trauma in Sue Ann’s past resurfaces. She blames their parents for the happy memories she never had, and now sees their children as emblems of the potential stolen from her.

Ma is notable for many reasons, but the biggest one is that its title character is not only the rare Black female lead in a horror movie, but an antihero of the highest caliber. Roundups of great film antiheroes (at least, ones from movies not based on comic books) inevitably feature righteously violent white men: Taxi Driver’s Travis Bickle, Falling Down’s William Foster, and Mad Max’s Max Rockatansky while white women have found awards-season recognition for roles like Frances McDormand’s angry, grieving mother Mildred Hayes in Three Billboards Outside Ebbing, Missouri. Because audiences have historically been given white heroes, good white characters can do bad things without necessarily being perceived as out-and-out villains. When people of color—and Black people in particular—do the same, their violence is often given a less charitable reading, like Training Day’s Alonzo Harris (Denzel Washington) or The Wire’s Omar Little (Michael K. Williams).

There are only a handful of non-Blaxploitation revenge films whose roaring rampager is a Black woman. Rare recent examples in film are Proud Mary, an installment or two of The Purge, and Jordan Peele’s Us. This reflects a well-documented lack of behind-the-camera diversity in Hollywood, but seems especially notable because Black women are singularly placed in a society that fuels their profound and understandable rage. Sue Ann talks about how everyone needs her, but nobody really sees her until they want something. She’s a prop, an object that exists to give succor to others—the dark opposite of Spencer’s previous roles in The Help and The Shape of Water. After giving and giving, Sue Ann’s turn to calculated and increasing violence makes sense.

Sue Ann is a prop, an object that exists to give succor to others—the dark opposite of Octavia Spencer’s previous roles in The Help and The Shape of Water.

And yet Tate Taylor—who also cast Spencer as The Help’s scene-stealing Minny—rewrote Ma’s originally white Sue Ann character for his longtime friend without specifically mentioning or engaging with her Blackness in the story. On paper, this seems like a big omission, given Sue Ann’s outsider status in her small community. But Spencer’s own presence as a plus-sized, dark-skinned Black woman adds these layers naturally in a commanding and nuanced performance. We might be weirded out by Sue Ann’s behavior, but we can actively root for her even as she spirals.

As the people who tricked, tormented, and traumatized Sue Ann come back into her life through their children, it’s perfectly understandable she’d bring the sins of the fathers (and mothers) onto their entitled spawn. When Sue Ann finally has the opportunity to confront Ben about what he did to her all those years ago, his response is one that has regularly let white men off the hook: “I was just a kid!” he shouts at her. There’s no apology in sight. “So was I, motherfucker,” she responds.

Because pop culture gives us few chances to see Black women actually wreak the revenge they deserve, each particular moment of revenge felt like it was over far too quickly. I don’t normally enjoy excessive gore and violence, even in revenge narratives where they make narrative sense, but Ma is one case where I would have made an exception—especially since I had never before seen something of myself in another plus-sized woman of color vanquishing her foes in such concrete ways. The mostly Black audience in the theater actually clapped and cheered when she got going, and I did too. The catharsis was glorious.

It is in the moments of retribution that “Ma” shifts from mammy to an Old Testament god figure. Sue Ann’s first rule, she tells the teens, is to not take the Lord’s name in vain; of course, they do it anyway, as if taunting her to do something about it. The Bible says, “You shall not bow yourself down to them, nor serve them. For I the Lord your God am a jealous God, visiting the iniquity of the fathers upon the sons to the third and fourth generation of those who hate Me, and doing mercy to thousands of those who love Me and keep My commandments.” Replace “Me” with “Ma” and Sue Ann quickly becomes an avenging goddess, KaliMa breathing fire and laying waste to her enemies one by one.

But women, and in particular Black women, suffer disproportionately in this America that coddles violent white school shooters and other domestic terrorists while demonizing Blacks for simply existing. Film and TV’s “angry Black woman” trope exists to undermine the appropriate rage of Black women while giving white onlookers a reason to feel scared or threatened—especially when called on their racism. Ma successfully turns this stereotype on its head, forcing the viewer to identify not just with a Black woman but also with the profundity of her righteous anger: It’s Get Out leveling up its Black feminism. At the same time, the fact that more than a few white reviewers expressed surprise that Spencer was so good in a horror-film role is troubling in its racism: Why wouldn’t one of the most talented actors of her generation not give a breathtaking performance?

As Sue Ann, Spencer humanizes a heartbroken, traumatized woman even as she does terrible thing after terrible thing. Spencer excavates the core of humanity in Sue Ann’s rage that has the potential to shift the angry-Black-woman stereotype away from the real-life women it harms daily. But first viewers need to center Sue Ann’s experience, not that of the white folks who abused her. Sue Ann says over and over, “Mommy loves you. Ma loves you.” But mommy has also rightfully had it with your shit. And Ma is a disturbing and vital vision of what might happen if Black women acted out their rage on others just as whites do every day. It’s not even scary when Sue Ann takes care of her business one by one. It’s starting to simply feel necessary: Revenge as reparations.

Read this Next: “Get Out” and the Ineffectiveness of Post-Racial White Feminism